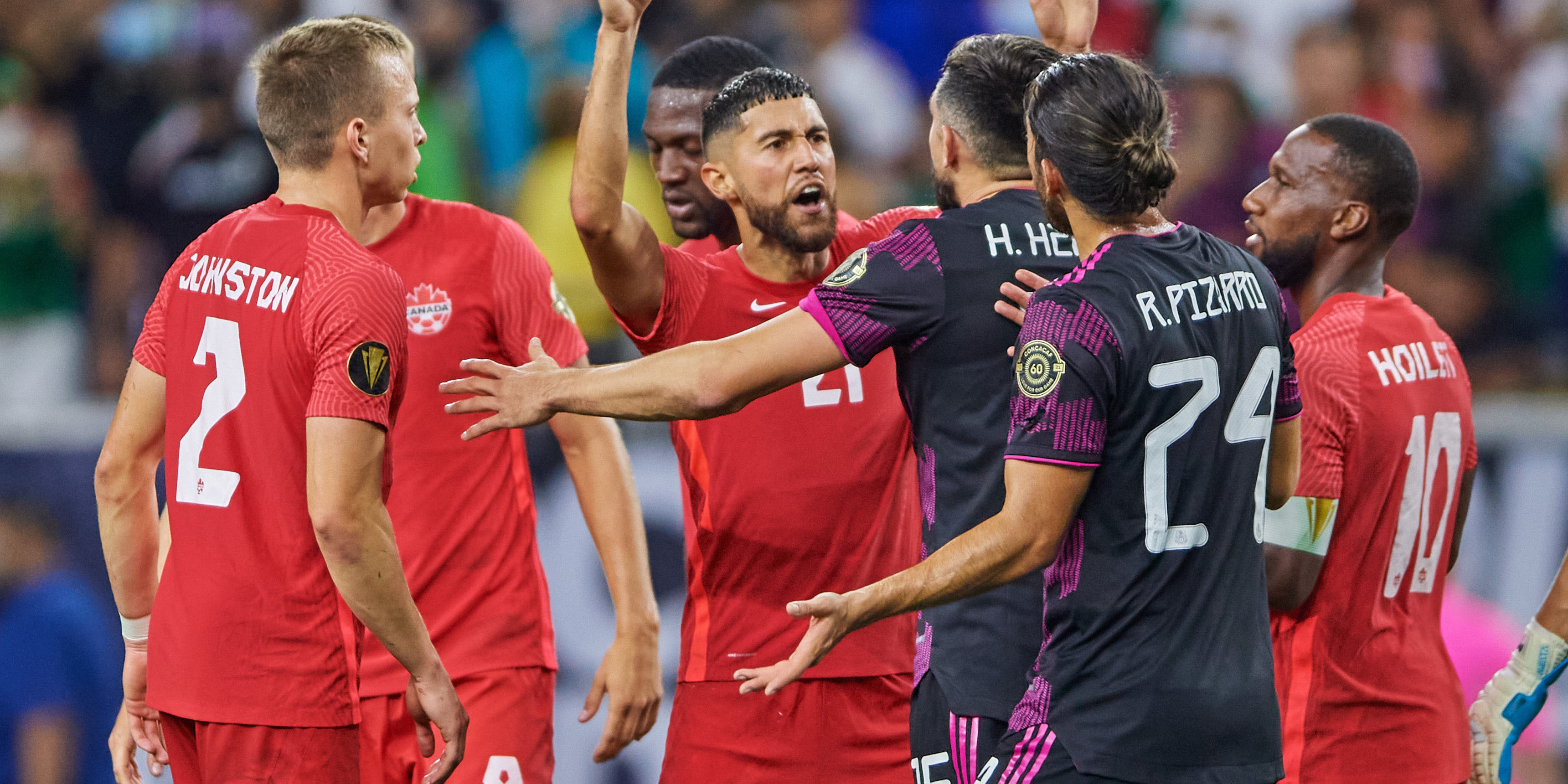 “Follow boldly whither Fortune calls. Thy way of safety, as thou least couldst dream, lies through a city of thy foes.” — Virgil, the Aeneid

The Canadian men’s national team face their greatest challenge yet on Thursday. This, the first of three fixtures in this international window, is the one that’s been playing in the minds of every player and coach in John Herdman’s group ever since they booked their ticket to this final round of 2022 FIFA World Cup Qualifying: a chance to do battle with Mexico in the Estadio Azteca.

For, surely, the first time since World Cup ’86, the Canadians relish, rather than fear, a trip to Mexico City to try themselves against the stiffest opposition. Having taken El Tri right down to the wire just over two months ago in the Gold Cup semifinal, John Herdman’s men have been waiting anxiously for another crack at the top side in Concacaf, and that chance has arrived — with the highest of stakes.

If they’re to get to Qatar 2022, Canada will need to prove themselves capable of thriving in difficult environments — of which there are few more difficult than the Azteca. Expectations for this Canadian squad aren’t yet so high to demand a result on Thursday, but kicking off this key window with a performance to build from is vital. Plus, as one of the marquee fixtures on the qualifying calendar, it’s a moment that really could help get the nation back home beside this squad.

Mexico — ninth in the latest FIFA World Rankings — have long been the greatest power in this region, having played at 16 World Cups (including each of them since 1994). They’ve been champions of Concacaf 11 times, and anything less than domination over their North American counterparts is failure.

“They know that Canada left a mark on them in that last game,” Herdman told reporters on Wednesday. “Good teams, good players, championship teams, they step up. We’re not a surprise anymore, so what we’re expecting is a big response from the Mexican team.”

Which means all the pressure is on them for this match. Mexico opened the Octagonal stage of World Cup Qualifying last month with two wins (over Jamaica and Costa Rica) plus a draw on the road against Panama. Despite their place at the top of the standings after three games, they weren’t necessarily thrilled with each contest; they were separated from a draw at home with Jamaica by a fortuitous 89th-minute winner, and dropped points against Panama were less than ideal.

More on the Mexican opposition later, but on Canada’s side: Herdman’s men come into this window joint-second in the Octagonal standings after beating El Salvador and drawing against Honduras and the United States in September. A few key names will be absent, but the good news is Herdman still has all sorts of talent to draw from as he tries to balance his squad selection across three important games over six days (first in Mexico, then in Jamaica, then at home against Panama).

Canada have won just three times from 36 attempts against Mexico: in 2000, in 1990, and in 1976. The last time Les Rouges avoided defeat was a 2-2 draw at Edmonton’s Commonwealth Stadium in 2008. On Mexican soil, it’s even bleaker: no Canadian men’s side has ever won there, nor have they claimed even a point since 1981. At the Estadio Azteca itself, Canada have been outscored 27-2 over nine matches, dating back to 1971.

To be fair, though: None of those Canadian sides had Alphonso Davies or Jonathan David. Herdman’s group have said repeatedly that they fear nobody; they’re not expected to win in Mexico, but a strong performance on its own would put El Tri on notice.

“We’re not scared of anybody,” Canada’s Jonathan Osorio told the media this week. “We believe that we can beat anybody in this region.”

It’s been said repeatedly in the build-up to this qualifying campaign, but the words “Estadio Azteca” come draped in mythology and history. This 87,000-seat stadium is the cathedral where Pelé won his final World Cup in 1970. It’s where Diego Maradona scored both the Hand of God and the Goal of the Century. This temple to football has long been an impenetrable fortress for the Mexican national team, who have lost on home soil in World Cup Qualifying just twice in almost 90 years. The last team to do it was Honduras in 2013, and the other was Costa Rica in 2001 (the latter of which has its own Wikipedia page, such was the scale of the occasion) — and both those teams ended up getting to the World Cup. There’s also the wrinkle that Mexico City, 2,200 metres above sea level, poses an additional challenge with the altitude — which certainly helps the Mexican players with more experience in their home country.

All that said, though, Canada cannot allow the occasion and the venue to get the better of them. Plus, this type of test is one that can offer silver linings beyond the result: positive performances, individual or across the whole team, will give Herdman and co. plenty of inspiration as they head into other games this week and later in this campaign.

Hallowed ground or not, a football match is 90 minutes long, with 22 players — whether it’s on a training pitch in Brampton or on Mount Olympus.

Making John Herdman’s life more difficult for this game is the dent in his squad formed by absences of key players. Cyle Larin and Atiba Hutchinson, both stalwarts for this team, picked up injuries recently with their club in Turkey, and goalkeeper Milan Borjan contracted COVID-19 which has ruled him out as well. Striker Lucas Cavallini is also reportedly unavailable for the Mexico game, having remained in training with the Vancouver Whitecaps for now. Plus, United Kingdom-based players Junior Hoilett and David Wotherspoon will be unavailable for the trip to Mexico due to quarantine rules and travel restrictions. That alone makes squad selection tricky, especially considering Canada play again on Sunday night in Jamaica.

Then, there’s the wrinkle that five of Canada’s squad (Steven Vitoria, Mark-Anthony Kaye, Richie Laryea, Tajon Buchanan, Sam Adekugbe) are sitting on a yellow card from the first window, so another caution would mean a suspension for the next game. Herdman may be forced to test his depth a little more than he’d like this window, and picking his starting XI for Mexico will be something of a balancing act with upcoming games where Canada have greater expectations of a result.

What to watch for with Mexico

So, why exactly is this particular Mexican team a threat to Canada — and how do they differ from the side they played in the Gold Cup semifinal? Well, a lot of that Gold Cup squad back in camp this time — including all 11 starters from the game against Canada. That includes 99th-minute goalscorer Héctor Herrera of Atlético Madrid, and 45th-minute penalty converter Orbelin Pineda. Herrera actually missed the September window, but he’s back this time. So, too, is star man Raúl Jiménez, a top striker in the Premier League for Wolverhampton Wanderers who will be making his El Tri return after suffering a skull fracture in November 2020. Napoli forward Hirving Lozano is in the squad as well, as is Porto’s Jesús Corona — which is all to say that this Mexican team has a ton of goalscoring prowess. Coach Tata Martino — formerly of Barcelona, Argentina, and Atlanta United — went with a single-striker setup in each game last window with Rogelio Funes Mori up top, but don’t be surprised if he opts for Lozano and Corona outside of Jiménez in a front three.

“That’s what we want, we want Mexico with their best players here,” Herdman said. “We need to really test ourselves in this environment. And we also need to learn, we need to learn what Mexico looks like playing with Corona, Lozano, Jimenez up front — Mexico hasn’t played with those three players together in over two years, and that’s their best front three, so we can learn because we’ve got a home game as well coming up in a couple of weeks’ time.”

Also back in this Mexican squad is 35-year-old captain Andrés Guardado, who plays for Real Betis in La Liga and has the second-most caps in Mexican men’s team history (169); expect him to go head-to-head with Canada’s Stephen Eustáquio in the middle. Ultimately, El Tri have a lot of experience — but that also means they’re a much older team in general than Canada, who will fancy their chances with Alphonso Davies and Richie Laryea blasting down the flanks. Still, Canada have to expect to defend for much of this game, perhaps like they did in Nashville against the U.S.