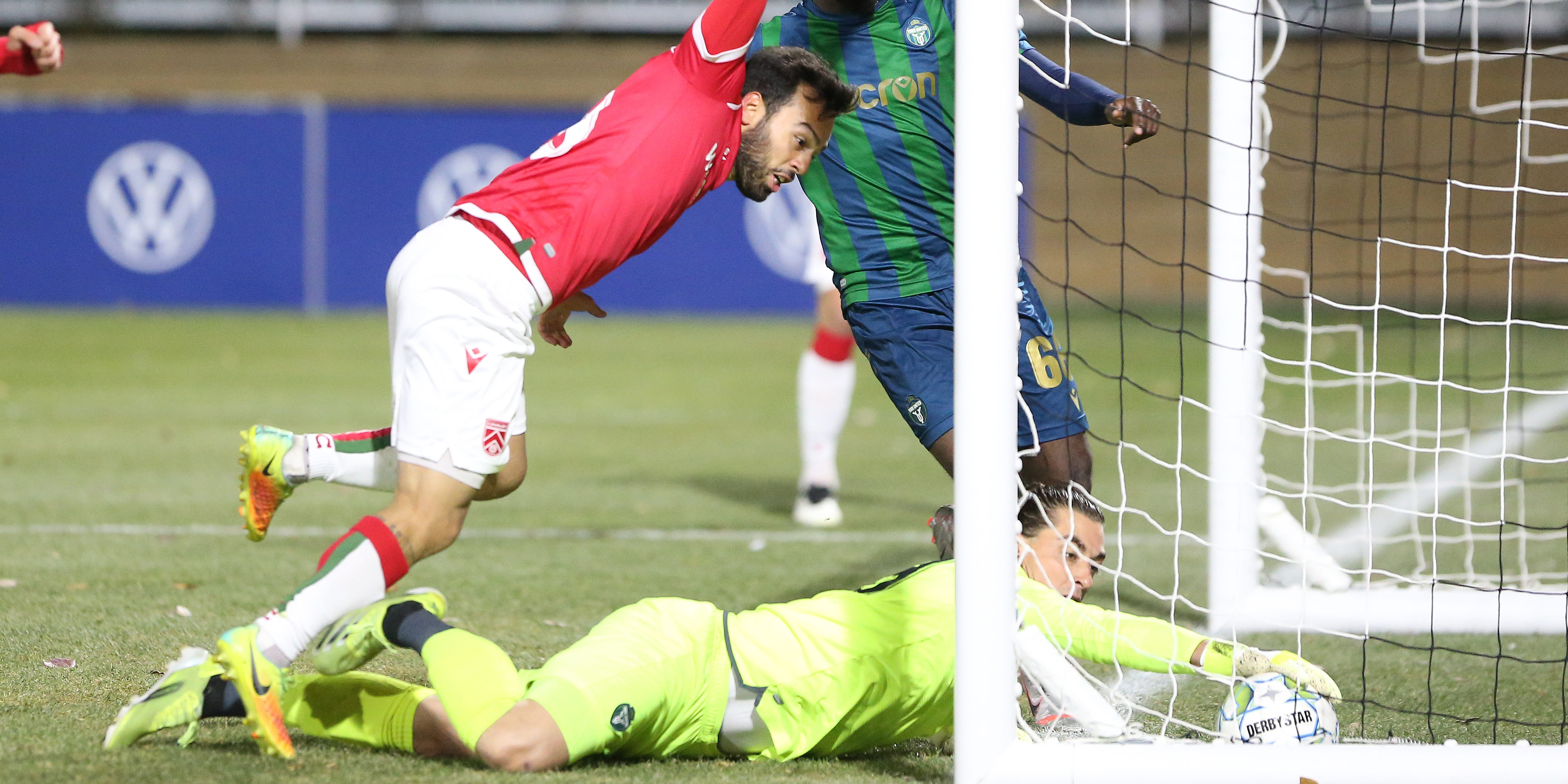 Cavalry FC took over first place in the CPL on a chilly Thursday night with a gutsy 2-1 win over York United at Spruce Meadows, battling all kinds of adversity en route to a memorable result. York opened the scoring just five minutes in with a lethal counter-attack that ended in a strong finish from Isaiah Johnston, and things went from bad to worse for the hosts just 10 minutes later when captain Nik Ledgerwood pulled up with a hamstring injury.

The Cavs found their equalizer midway through the half, though, as Sergio Camargo got on the end of a corner kick and the ball trickled over the line. Just before halftime, though, a scrum in the Cavalry box led to Joseph Di Chiara being sent off for a second yellow card.

Not deterred, the Cavs defended well with 10 men throughout much of the second half — though Marco Carducci needed to make a couple excellent saves — and at last they found their winning goal, as a free kick from Ben Fisk found its way first to Daan Klomp, then off York defender Chrisnovic N’sa, and finally into the back of the net.

Though the home side were quite aggressive in taking control of the match and establishing possession in the early stages, they might have gotten a little carried away at times with how high into York’s half they looked to press. The Cavs had 73% of the ball in the first 15 minutes, but they found themselves down a goal after conceding just five minutes in.

In that early period, Cavalry kept their backline very high up the pitch — Daan Klomp playing almost in midfield at times — and York were able to exploit that with some very quick counter-attacks. With direct, aggressive runners, York could create a chance quickly after winning the ball in their own half, which they did a handful of times due to sloppy passes from the Cavs.

After a few close calls, though, Cavalry seemed to adjust. With Victor Loturi coming into the game for an injured Nik Ledgerwood around 15 minutes in, coach Tommy Wheeldon Jr. took the opportunity to settle his side down with some defensive adjustments — namely, sacrificing a little of their possession in the name of establishing a defensive line that wouldn’t be as easily bypassed in transition. York, being the dangerous vertical team they are, still managed to get forward quickly, but they typically found their progress impeded in the box as Cavalry dropped more numbers back to deal with cross and cutbacks.

After going down to 10 men, Cavalry didn’t necessarily have to deal with the counter-attack anymore, as York took over the role of protagonists and slowed down, but the Cavs still continued their first-half trend of keeping numbers in the box. They were actually bailed out by goalkeeper Marco Carducci a few times as York’s through balls occasionally did get behind the defensive line, but in general they did well to keep York from breaking them open as they had in the first half.

He added: “We knew that York needed the win, they’ve never beaten us before. We reminded the players of that, we said if we can’t get the win, we’re going to stick to a very compact 4-4-1 and we’re going to make sure that they don’t win, because this was not a three-point game. That was a six-point game; they’re in the hunt for the playoffs.”

Cavalry became more patient, and eventually it paid off with a timely set-piece.

Heading into this game, York boss Jimmy Brennan spoke about his side’s need to be a little more selfish with the ball and take their chances in the box; they’d taken over 15 shots in each of their three previous games heading into this one (hitting 20 in two of them), but they had just five goals to show for it. On Thursday, the picture was similar: York had 19 shots, eight of them on target, but they only found the net once — and that was early in the first half, well before they had the man advantage.

The Nine Stripes did look more aggressive in their play in the final third this time out, as their through balls found shooters in better position. As mentioned, Cavalry needed Carducci to make a few incredible saves in the second half to keep them level.

“Now, I think it’s a little bit of luck that we need. We keep getting in those areas, we’re dangerous when we go forward, but tonight I thought Carducci made a couple of great saves there; we kept on penetrating, we kept on getting in, and as you saw we had an awful lot of shots, but it just was not going in for us in that second half.”

Indeed, York looked very good move the ball forward with some direct balls, balancing their threat across both wings and through the middle, but the final product remains elusive. Julian Ulbricht’s vain attempt to pick a cross out of the air with his foot rather than heading it on goal in the first half was, perhaps, an example of overthinking things in the box — something York did improve on in this game.

At the end of the day, York probably should have scored another goal or two had the opponent’s goalkeeper been less dominant, but that they haven’t managed to turn draws into wins despite so many shots in each of their last few games will be frustrating for Brennan and co.

All within a half, Cavalry conceded a goal, lost their captain to injury, and had a key player sent off. All of that would be enough to sink a lot of teams, but apparently not this Cavalry side. Although they found themselves pinned back in the early second half, they managed to survive and take their chance from a set-piece when it finally came.

The Calgary side won 53% of the duels in this game, blocked seven shots, cleared the ball 16 times, and intercepted it 13 times. On a night where the temperature was hovering close to freezing, the play on the pitch was extremely heated from both sides, but it was the hosts who responded better.

“I don’t know if you could have any more bad luck, but we’ve always said we don’t make excuses, we make adjustments,” Wheeldon said of his side’s response. “We made them at halftime, we made them with our substitutions; we asked the lads to defend a little deeper and stay compact then hit on the counter, and other opportunities would come, and they were clinical with it. I’m very proud of every single one of these guys because it has been a rough season, but they’re not shying away from it, they’re adapting to it every single time, every single game. The celebration was more a sigh of relief; I think I’ve got more grey hairs this year than I have in all the previous ones.”

Certainly, this season has not been easy for any CPL team, and Cavalry are no exception — they’ve had some terrible luck with injuries this season, and they played all of their league matches in September away from home. However, they still find themselves in first place, which is a testament to the character of Wheeldon’s group.

“One day I’m gonna write a book — or maybe a film series — about this season,” Wheeldon quipped. “But I’m not too sure whether it’s a drama, comedy, or horror series because there’s some stories you guys just don’t know about that one day we’ll talk about.”

The Cavalry goalkeeper made seven excellent saves on Thursday to limit York to just one goal, playing well enough to draw serious compliments from both managers. Tommy Wheeldon Jr. said Carducci stood on his head for the Cavs in this game, adding: “Marco Carducci. What a guy.”

Both teams are right back at it this Sunday, October 17, with each side at home for their next CPL clash. Up first, York United will host FC Edmonton at York Lions Stadium (2 pm ET), followed by Cavalry taking on HFX Wanderers at ATCO Field (4 pm ET/2 pm MT). Watch all matches live on OneSoccer.