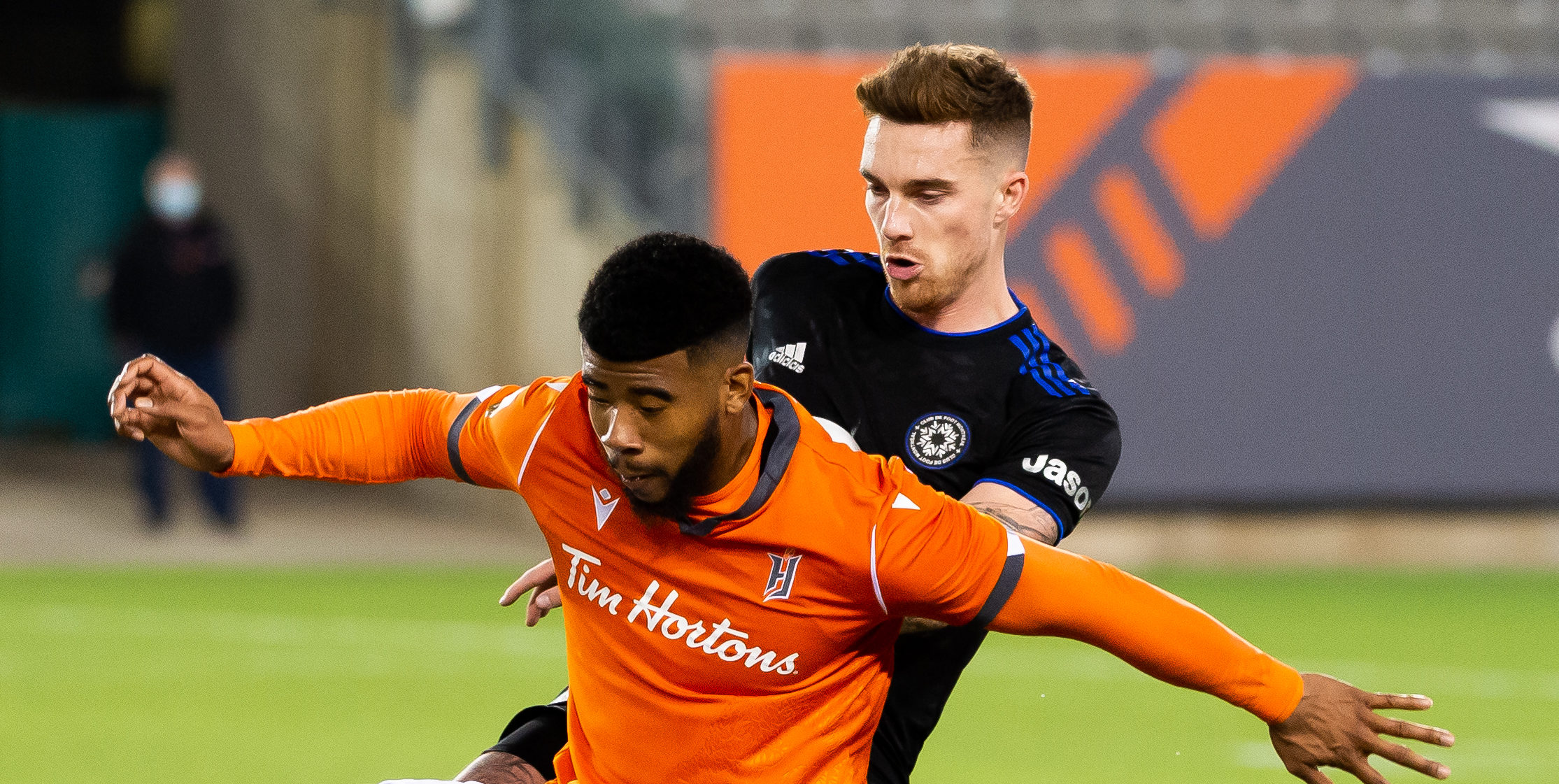 It took a while, but CF Montreal booked their ticket to the 2021 Canadian Championship final on Wednesday night at Tim Hortons Field, defeated CPL outfit Forge FC in a wild penalty shootout after a high-octane 0-0 draw through the 90 minutes of regular time.

Although the hosts Forge had an advantage in shots and dangerous scoring chances, they couldn’t capitalize and ultimately the sides met in a shootout that went the distance: all 22 players on the end of the pitch at fulltime took a spot kick, with Montreal goalkeeper Sebastian Breza ultimately getting the best of his opposite number Triston Henry in the 11th round to send the visitors through to the final.

Over their history, Forge have rarely been seen employing a high press, more often preferring to stay in their shape and establish possession patiently and methodically. This time, though, Forge were very deliberate in sending numbers forward. With a 4-2-3-1 shape, they often threw as many as five players forward to put immediate pressure on any Montreal player trying to build out of the back — including the goalkeeper.

By closing down space so quickly, Forge did well to rush Montreal into low-percentage passes and shot attempts. Kyle Bekker and Tristan Borges, in particular, seemed eager to join the fray — at times, Borges seemed even to be man-marking Montreal captain Samuel Piette, with the two coming together in duels repeatedly.

Borges, playing in a slightly different position to his usual, lined up as a traditional number 10 in the middle of the park, and he assumed a greater defensive burden than he’s often asked to.

Head coach Bobby Smyrniotis explained postmatch that the high press was indeed by design; he felt that his side would be better off starting from further up the pitch than they might usually.

“I thought it was important for us to be a little bit higher up the field,” he said. “They’re a team that likes to play, likes to get on the ball, liked to get into a rhythm, and I thought we could probably do a good job of cutting that off. I thought the guys were fantastic, we didn’t really give (Montreal) much to be able to come out of their back end, and that way it kept a lot of the game in their half of the field for spells whether we were in possession or whether we were in our press or our trap motions.”

After playing so aggressively in the first half with their high press, Forge were perhaps even better for long stretches of the second half — particularly the first and last 10 minutes of the 45. They seemed to have adjusted to Montreal’s pace along the wings, which caused issues for them in transition in the first half; after halftime, it was Forge who dominated in possession out wide, with through balls often coming from Bekker out to Kwame Awuah on the left side, with the fullback quick to get around his opposite man.

That expanded wide play led Forge to play more crosses into the box, but despite the influx of balls coming through dangerous areas they struggled to get a poacher on the end of them. A few certainly came close — one ball from an intricate set-piece came right across goal and found the leg of Emery Welshman to deflect behind, although Borges might have had an easier opportunity at the back post.

Forge ended the game with 14 shots to Montreal’s five, and they had five shots on target, plus 14 open play crosses, and they held the visitors to just one shot in the entire second half. Looking back at the highlights will be painful for them, frankly; they’ll definitely feel the goal was there for them.

A few cutback passes toward the box did seem to miss their target by mere centimetres, with trailing runs just barely mistimed or the ball falling just out of reach of the striker looking to bring it down from the air. Forge did very little wrong in this game; only that very last piece seemed to elude them.

Bobby Smyrniotis said earlier on Wednesday that his side has practiced penalties quite regularly in training, but an 11-round shootout where goalkeepers have the final shot is certainly not something any team expects to face.

It’s not unfair to say Forge probably deserved to win this game, but Montreal of course did well to weather a storm and hold their composure when it mattered, especially as the team shooting second in penalties.

When the story of this game is told in future, so many moments from the shootout itself will be forgotten: Forge battling back after missing their first attempt; David Choiniere’s cheeky scoop shot in a sudden-death situation; Triston Henry making three excellent saves to keep his side alive. They’ll come out of the situation very disappointed, having come so close (within inches, at times) to winning the shootout, but the CPL side have nothing to be ashamed of in a defeat like that.

Henry in particular will be devastated after missing his attempt from the spot, but it’s difficult for a goalkeeper to shift focus so quickly after 10 rounds of a shootout with nothing on his mind but saving penalties.

Speaking to CanPL.ca’s Kristian Jack on the sideline just moments after the shootout, the moment was raw for Henry, but his penalty-saving heroics were the reason his side got that far in the shootout in the first place.

It’s a shame, really, that the crowd at Tim Hortons Field never truly got the chance to erupt in the way it seemed they would if Forge scored or won the shootout — the nervous energy was tangible in the stadium as the shootout continued to unfold, with every single person in attendance on their feet. Still, Forge will leave the building with their heads held high.

“When you get into penalties it’s a little bit of Russian roulette,” Smyrniotis told media postmatch. “You saw how close the game was, and we’re going into penalty shots and made it 11 rounds. Proud of the guys; we just need to keep on moving forward. We don’t have much time to think too much about this one, we get prepared for Saturday.”

@ForgeFCHamilton captain Kyle Bekker on Forge having lots to be proud of from penalties loss vs. Montreal. #CanChamp #CanPL pic.twitter.com/OEkr8j9Iim

With two simultaneous competitions still alive for them, Forge are not to be trifled with in the next few weeks.

Forge’s most versatile player excelled again on Wednesday, this time playing as a right fullback. He led the match in individual touches by a double-digit margin, playing an important role in taking away space defensively and then creating it for his teammates going forward.

Montreal will advance to the Canadian Championship final in late November, where they will take on the winner of next week’s encounter between Pacific FC and Toronto FC. In league play, Forge will turn their attention now to this Saturday, October 30, when they host HFX Wanderers FC (1 pm ET/2 pm AT), while Montreal will return to MLS action the same day as they play New York Red Bulls on the road (4 pm ET).

Watch all CPL and Canadian Championship matches live on OneSoccer. In addition to its website and app, OneSoccer is now available on TELUS channel 980 and on Fubo TV. Call your local cable provider to ask for OneSoccer today.