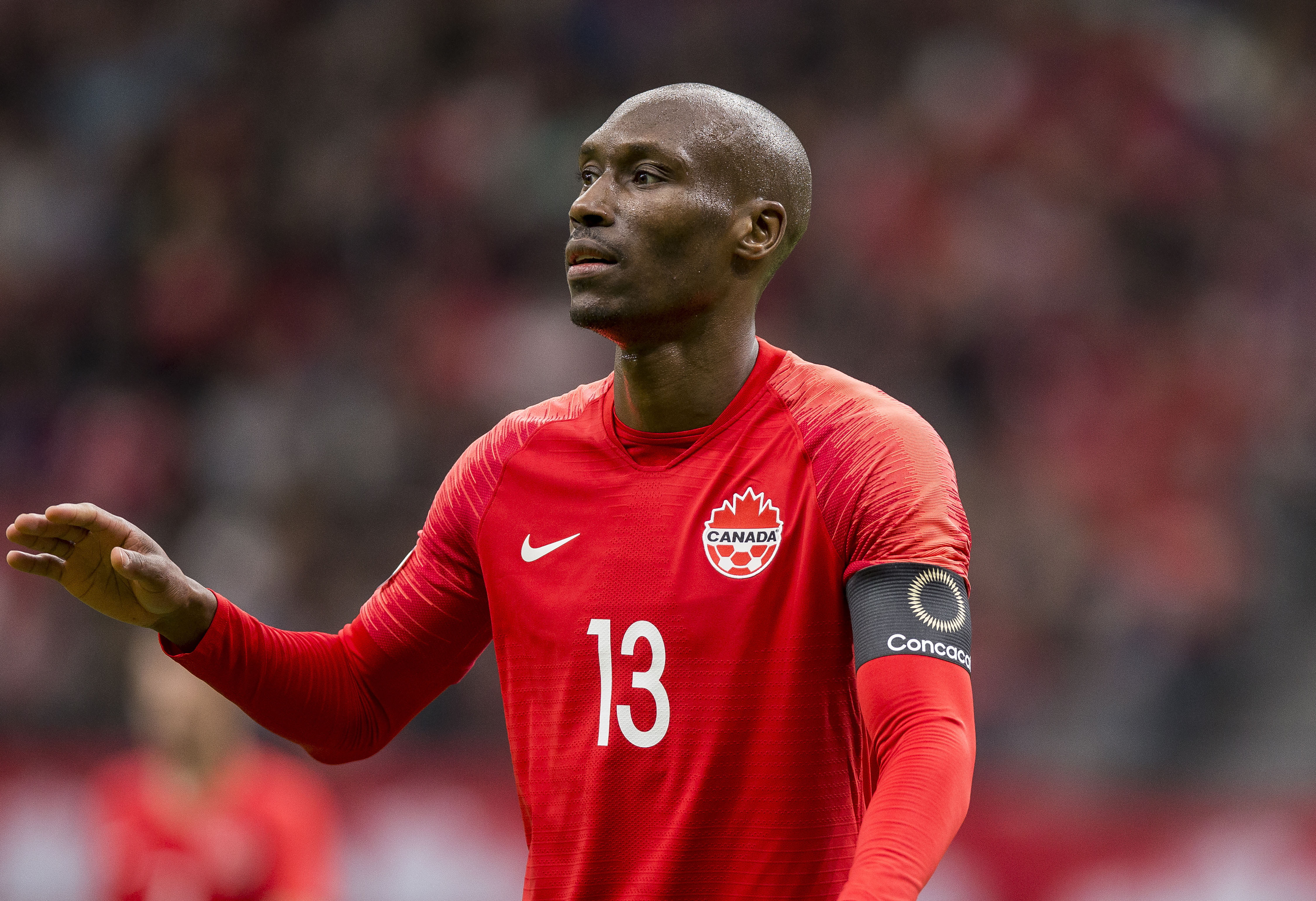 Atiba Hutchinson (Canada Soccer).
CanMNT’s Atiba Hutchinson on Beyond the Pitch: “It’s a different mentality in the way that we approach games”
2021-11-10
by
Benedict Rhodes, CanPL.ca Contributor
News

Playing in the Champions League again, lifting trophies in Turkey, and being on the verge of breaking the Canadian men’s national team’s all-time caps record. It’s been an exciting year for Atiba Hutchinson — a bright time in his career during a difficult time in the world, as he told CanPL.ca’s Kristian Jack on the latest episode of Beyond the Pitch.

Hutchinson joined the show to discuss the past year for club and country, living in Turkey, the current upwards trajectory of the national team, and more.

“I haven’t really seen it anywhere else, maybe in one or two games playing with the national team in Central America — Honduras had a great atmosphere as well, not an easy place to play.”

Hutchinson has been in Turkey with Beşiktaş since 2013, and he currently serves as the club’s captain. The 38-year-old midfielder from Brampton, Ontario spoke on the show about his love for the country, and his family’s experience there.

“I raised my kids here, my kids are born here, my wife loves it here — it’s kind of like a home away from home,” he said. “This is my ninth season now, so it’s been a while, but it’s gone really quickly. I’ve really enjoyed a lot of it.”

The conversation turned from Atiba’s career to the Canadian men’s national team, who are set to play another two World Cup qualifiers this week. On Friday they take on Costa Rica, and on Tuesday they play Mexico — with both matches taking part at Commonwealth Stadium in Edmonton, Alberta.

Should he play in both matches, Hutchinson will become the men’s national team’s all-time leader in international caps, and the first player to reach 90 caps. He currently sits on 88, just one back of Julian de Guzman’s 89.

“Jules is a very close friend of mine,” said Hutchinson. “[Breaking the caps record] was never something I was really thinking about. If it happens, it happens. I’m happy for the career Jules has had and what he’s done for the national team — he’s always been a big brother to me. With the U20s I came in, and he took me under his wing, and we’ve been tight ever since.

“I’m not really focused on that, I couldn’t care less (about breaking the record). I’m more about what’s going on with the national team, how much potential there is in the team, and any way I can help out, I’ll try to do the most to be there.”

Making his debut in 2003 — a friendly match against the United States — he has seen a lot of changes to the national team over the years, but the most noticeable one might be the mindset that the team has.

“I remember just going into games, and it was just hoping we can go out there and get a result,” he said. “Now, I have that feeling similar to what I would have with the teams I’ve done well with here in Europe. You know if things go your way, you get your goal early, you know you’ve got control of that game and you’re getting three points in the bag.

“It’s a different mentality in the way that we approach games. It’s not really about hoping, it’s the right mindset to know that we can go out there and get three points in most of the games that we play.”

On the pitch as well, Canada believe that they can go toe-to-toe with the best teams in the continent.

“You’ve got players in so many different positions now that are playing at a very high level,” said Hutchinson. “There’s not much difference when we’re going into the games. We don’t feel like there’s a difference with any team that we’re playing against right now.

“Of course we haven’t played against the biggest countries in the world, but especially in CONCACAF, the matchups aren’t much different anymore, and that’s a good feeling to have. We’re a lot more tactically aware of what’s going on, what needs to be done. We’re very solid defensively — before we would give up relatively easy goals, but it’s hard to break us down now.”

To watch the full Beyond the Pitch interview with Atiba Hutchinson, click here. Canada continue their World Cup Qualifying campaign this Friday, November 12 with an 9 pm ET kickoff at Commonwealth Stadium against Costa Rica. Tickets are available here, and the match can be watched live on OneSoccer from 8 pm ET.