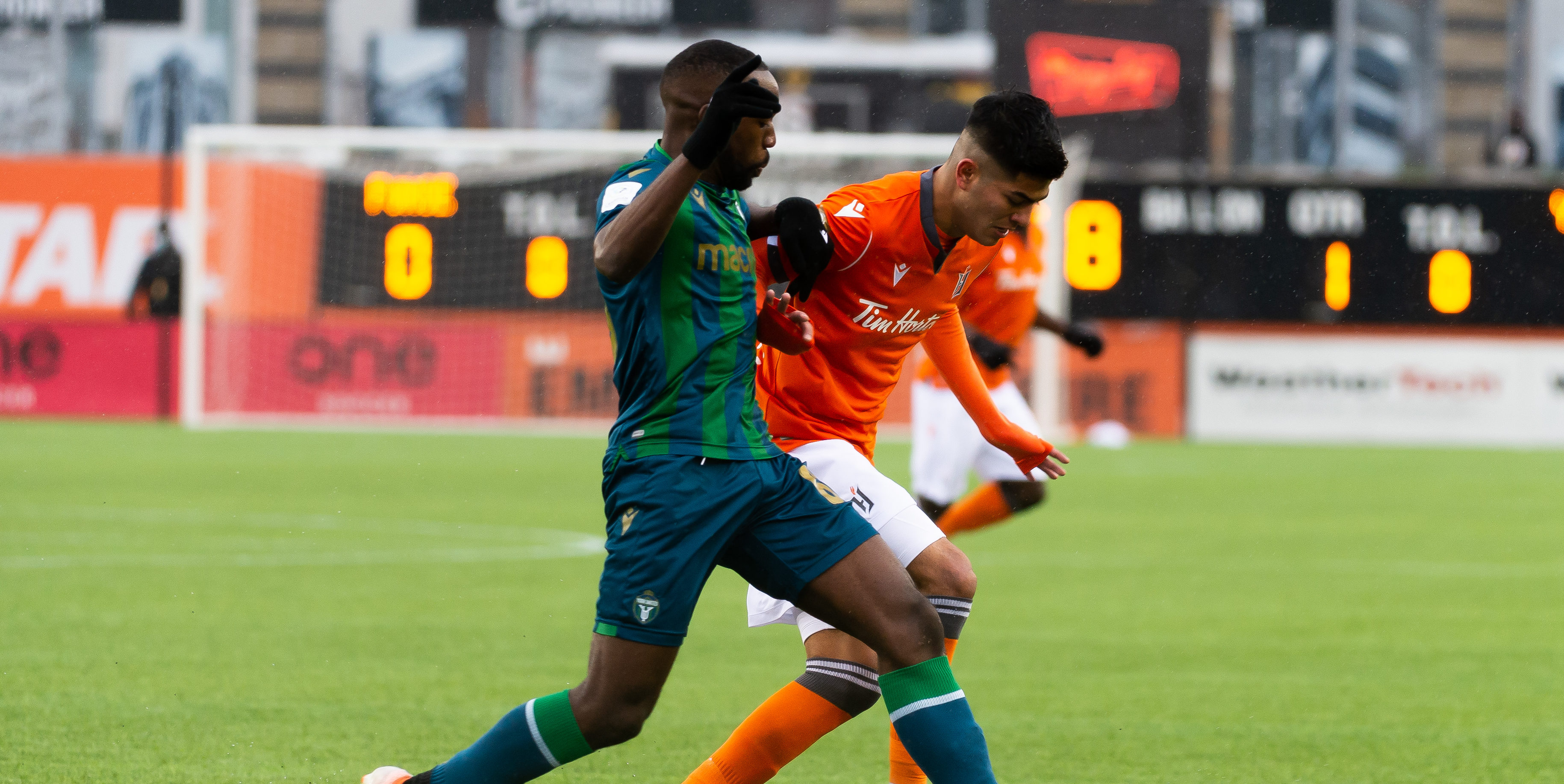 Forge FC will play in the 2021 CPL Final, after defeating local rivals York United by a 3-1 scoreline at Tim Hortons Field in Sunday’s CPL semi-final matchup. The home side got on the board first thanks to Woobens Pacius’ shot off the goalpost and in, but York managed to equalize just before halftime thanks to Michael Petrasso’s chip over the top.

In the second half, though, Forge pulled away; Joshua Navarro put them in front just after the hour mark with a good run in behind the defence, and it was Navarro again who got credit for the third goal as he managed to get his head on the ball amid a scramble from a Forge corner kick.

Forge stick with it, see out professional victory

On the stats sheet, a two-goal Forge victory is a just result. They outshot York 22-6, with 57% possession. The players that have been most reliable for them all year — from Kyle Bekker to Elimane Cisse to Kwame Awuah — were a study in composure and professionalism on the day; though York got back into the game with their first-half equalizer, Forge never once strayed from their gameplan and instead stuck to it.

They went into halftime with the score level, but Forge still looked the better side in the first 45 minutes, with a heavy advantage in shots and a few moments where they could have put the game out of reach far earlier. Credit is due to coach Bobby Smyrniotis for not over-adjusting after conceding the equalizer; at the end of the day, it was Forge’s patience and faith in their plan that made the difference.

“To be honest, I think we had a brilliant first half,” Smyrniotis said postgame. “Apart from a little miscommunication on York’s goal, we were brilliant and attacking. The guys took the three, four points we gave tactically on the attacking side, and they executed… And then on the defensive end, the same thing. That’s the one thing we talk about, there’s the principles of play that we have, and each game we will look at two or three little tactical nuances. I think the guys were spot on; they went out there and they did that in the second half.

“We just talked to them at halftime and said it was a brilliant first half, just one mishap there, and we just have to keep on doing it.”

Forge have a very complex portfolio of tactical options, though for the most part they stuck to their tried and true methods in this game against an opponent they know better than perhaps any other.

York open up on counter, can’t quite convert

Down a goal (and then two) late in the second half, York displayed the level of urgency one would expect from a team on the brink of elimination; with Forge bearing down on them quite aggressively, they found a few opportunities to counter attack quickly, with Diyaeddine Abzi, Max Ferrari, and second-half substitute Ijah Halley providing the pace they needed to get into the attacking third before Forge could get back into position.

Ultimately, though, the final product wasn’t quite there; York had no trouble getting into the final third and around Forge’s penalty area, but they couldn’t turn those moves into shots — they had just two in the second half.

Lowell Wright, who entered in the 64th minute to give York’s attack a different element to what Julian Ulbricht provides up top, ended up with just six touches of the ball, as the Nine Stripes struggled to find him with crosses or cutbacks.

Nonetheless, York coach Jimmy Brennan had a lot to be proud of in his side’s performance — and their season as a whole, considering the progress they made as the CPL’s youngest team.

“I’m very proud of them,” Brennan said postmatch. “After the match I told them right away, I said, ‘Look guys, what you’ve been through as a group, how hard the season was, to get to the playoffs, it’s been a great season for them.’ Obviously they’re disappointed because they wanted to get to the Final, but the good thing is they’ve got a taste of it. Especially the young guys, they’ve got a taste of how hard a gruelling season can be after 28 games.”

York did well to get this far, and they did not look out of place in a semi-final; they’ll head into this off-season full of optimism for the future.

Part of the reason Forge are so dangerous in transition and on quick attacks is the ability of their forwards to get into the right channels to make an impact. Joshua Navarro in particular was all over the pitch coming in from the left wing, managing to evade his mark consistently by drifting inside and getting lost amid the traffic in the middle of the pitch.

Woobens Pacius was excellent in that department as well, as evident from his first goal where he managed to cut in behind the York backline to get on the end of an excellent through ball. Tristan Borges, playing as a 10, looked very sharp with his incisive through balls; as a clever playmaker, Borges is often looking for those off-ball runs from his forwards, and he was very good at finding Navarro and Pacius in this game.

Navarro’s runs into the box consistently either pulled defenders out of position or went unnoticed, and he managed to create gaps for teammates as well by drawing the attention of either Dominick Zator or Jordan Wilson at centre-back.

Forge are a very well-drilled, tactically fluid side, but they’re able to be that because of the individual intelligence of their players. Navarro is just the latest in a long line of attacking players who have managed to integrate well with Forge despite the club’s core having been together so long, which is a testament to his skill and Forge’s sound recruitment of players who fit their profile.

The dynamic Costa Rican attacker was a handful for the York defence all afternoon, and it was his clever run behind the defence that led to the winning goal. He finished with six shots, and ultimately didn’t get credit for Forge’s third goal but it was still his work in the air that produced the moment.

Forge will move on to the 2021 CPL Final against Pacific FC, which will be played December 5 in Hamilton, kicking off at 4:30 pm ET. Before then, though, Forge have a two-legged tie in the Concacaf League semi-final against Honduran side Motagua, which begins this Wednesday, November 24 (8 pm ET). Watch all matches live on OneSoccer. In addition to its website and app, OneSoccer is now available on TELUS channel 980 and on Fubo TV. Call your local cable provider to ask for OneSoccer today.