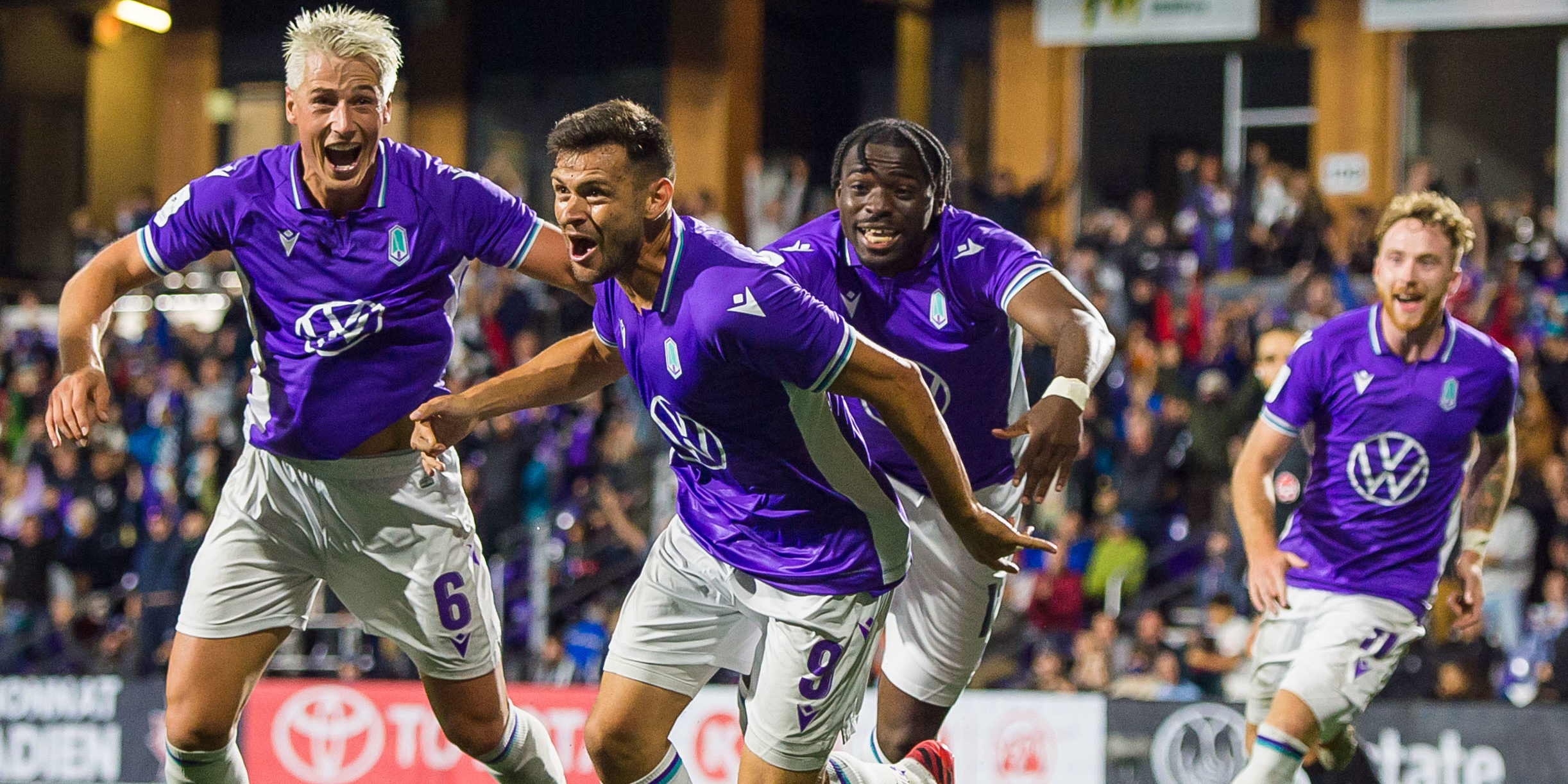 Pacific FC will march into Tim Hortons Field on Sunday afternoon with a singular mission: to leave with the North Star Shield.

After qualifying for the 2021 Canadian Premier League Final on November 20 with their 2-1 extra time win over Cavalry FC in the semi-final, they’ve been eyeing this weekend’s grand finale in hopes of becoming the first CPL club not named Forge FC to win the title.

After missing out narrowly on the 2020 Final at the Island Games, Pacific entered 2021 with a renewed hunger, and they transmuted that desire into a 45-point regular season — good for third in the league table, though they very well could have ended up higher were it not for a few results down the stretch — and 47 goals, more than anybody else in the CPL.

Now, though, comes the hardest part: depriving the defending champions of their three-peat in enemy territory.

RELATED: 3 reasons why Forge FC will win the 2021 CPL Final || Pacific’s Campbell reflects on three years of progress before CPL Final: ‘Everyone’s just stepped it up’

So, how do they do it? Certainly, Forge won’t be keen on giving up their trophy, and they have yet to lose to Pacific in their history (they won all three meetings in 2021). However, Pa-Modou Kah’s side are deserving finalists for a reason; there are ways they can hurt Forge and win this game.

Here are three potential reasons why Pacific could win the CPL Final.

Forge are a possession-heavy, methodical team that like to establish their own tactical blueprint and play the game on their terms. So, how can Pacific throw them off? By pressing Forge from front to back and refusing to allow them to settle themselves in possession. It’ll require a 10-man effort from Pacific’s outfield players to close down space and restrict decision-making time for any orange-shirted player on the ball, but that’s not outside of this team’s wheelhouse.

An aggressive pressing style like that is more or less how Pacific beat the Vancouver Whitecaps earlier this year in the Canadian Championship; the front three closed down defenders quickly, while midfielders moved in behind to intercept any sloppy or rushed forward passes. In that game, the front three was Josh Heard, Terran Campbell, and Gianni dos Santos, though Kah might well change that combination for Sunday.

Some of the greatest football coaches in the world — Pep Guardiola in particular — instill their teams with a principle of quick reactions to press effectively: at Guardiola’s Barcelona, he told his players that whenever they gave up possession, they needed to immediately press to win the ball back or force a mistake within six seconds. Such a strategy can be effective for presenting a team quick in transition (i.e. Forge) from establishing an attack. Current Liverpool boss Jurgen Klopp has similarly developed a counter-pressing philosophy, wherein his teams press after losing the ball and use that pressure as a way to create attacking opportunities high up the pitch.

Thanks to Centre Circle Data, we know Pa-Modou Kah might have taken some inspiration from those high-level tactical principles. Pacific were among the CPL’s elite at retrieving a lost ball quickly, regaining possession within six seconds of losing it 37.9% of the time — second only to Cavalry’s 39.9. Pacific were also joint-first in the CPL with Forge in total recoveries within the opposition half (481). Heard, Campbell, Alejandro Díaz, and Manny Aparicio all have excellent individual figures for pressing quickly, as well.

Despite the results, this is a strategy Pacific have used to some effect in recent meetings with Forge. In all three games against the Hammers in 2021, Pacific out-possessed their opponent, and held Forge to a pass success rate below 80% (which is unusual for Forge, who led the league with 83.2% average accuracy over the season).

Pacific need to be direct and aggressive in their approach against Forge; it’s a one-game final, which means anything can happen and there’s no reason not to go all-out. If the Tridents can suffocate Forge’s outlet options from the back to both prevent the transition and create opportunities for themselves, they’ll have a good chance on Sunday.

2. Difference-makers in attack can step up

A major storyline that’s been hanging over Pacific for several weeks now is the fitness of star attacker Marco Bustos. The winger has been one of the best players in the CPL this year, but he re-aggravated a knee injury against Toronto FC in the Canadian Championship and hasn’t played since — it’s unclear if he could play Sunday, but it seems unlikely at this point.

However, that won’t be a death blow for Pacific. Their biggest win of the season — the aforementioned Whitecaps tie — was earned without Bustos, as have many of their results down the homestretch of the season. The burden falls to other members of this team’s talented attacking core to make the difference against Forge, and they’ll surely be up for the challenge.

Terran Campbell and Alejandro Díaz have been among the CPL’s elite in attacking potency this year: in terms of non-penalty expected goals, Campbell was second in the entire league (9.29), with Díaz right behind him in third (7.54). Only five players in the league scored 10 or more goals this season, and Campbell (11) and Díaz (10) are among them.

Josh Heard will probably be the key third member of that front three, and the fullbacks — Kadin Chung especially — are critical to the way Pacific go forward, as well. Even at the back, the return of Lukas MacNaughton in the middle of their defence will boost Pacific’s ability to get the ball forward.

Forge have a deeper attacking group and thus have scored more by committee this season, Mo Babouli and Woobens Pacius being their joint leading CPL goalscorers with seven each. They of course have plenty of high-impact attacking players, but they’ve seen much more rotation up front.

It’s very apparent who Pacific must turn to in this final. Both players stepped up in a big way both against the Whitecaps and in the semi-final against Cavalry; if the Tridents are to get over this final hurdle, both Campbell and Díaz must be at the top of their game.

There’s no denying it: this has been a gruelling season for every CPL team. Since starting the season in a bubble in Winnipeg at the end of June, clubs have all had to contend with a jam-packed schedule. Of course, no team has played as many games as Forge (with their travel to Central America compounding the issue), but Pacific themselves have played 32 games in just under five months.

So, it may work in Pacific’s favour that they’ve had the last two weeks since their November 20 semi-final to work toward this final. A regular matchweek cycle was hard to come by in 2021, with games coming so quickly that teams rarely had time to fully train and prepare a detailed game plan for a specific match.

The fact that Pa-Modou Kah and his staff have this runway heading into a championship game will mean they’ll approach it comprehensively, ensuring the players are as ready as possible for any situation. They likely used some of the first week for much-needed rest and recovery before diving head-on into the question of how to win this game, which has surely consumed the players and coaches for some time now.

This is all in direct contrast to what the last two weeks have looked like for Forge. After their semi-final win over York United, they turned their focus immediately to the Concacaf League semi-final against Motagua. They played Leg 1 at home last week, and they spent much of this second week in Honduras for the return fixture, only returning to Canada from the much warmer climate on Thursday.

Forge will enter the final less rested than their opponent, with less time to prepare specifically for the game. That’s nothing new to them, having played twice a week pretty much non-stop this year, but it still could give Pacific a slight edge, if they’ve used the extra time to their advantage.