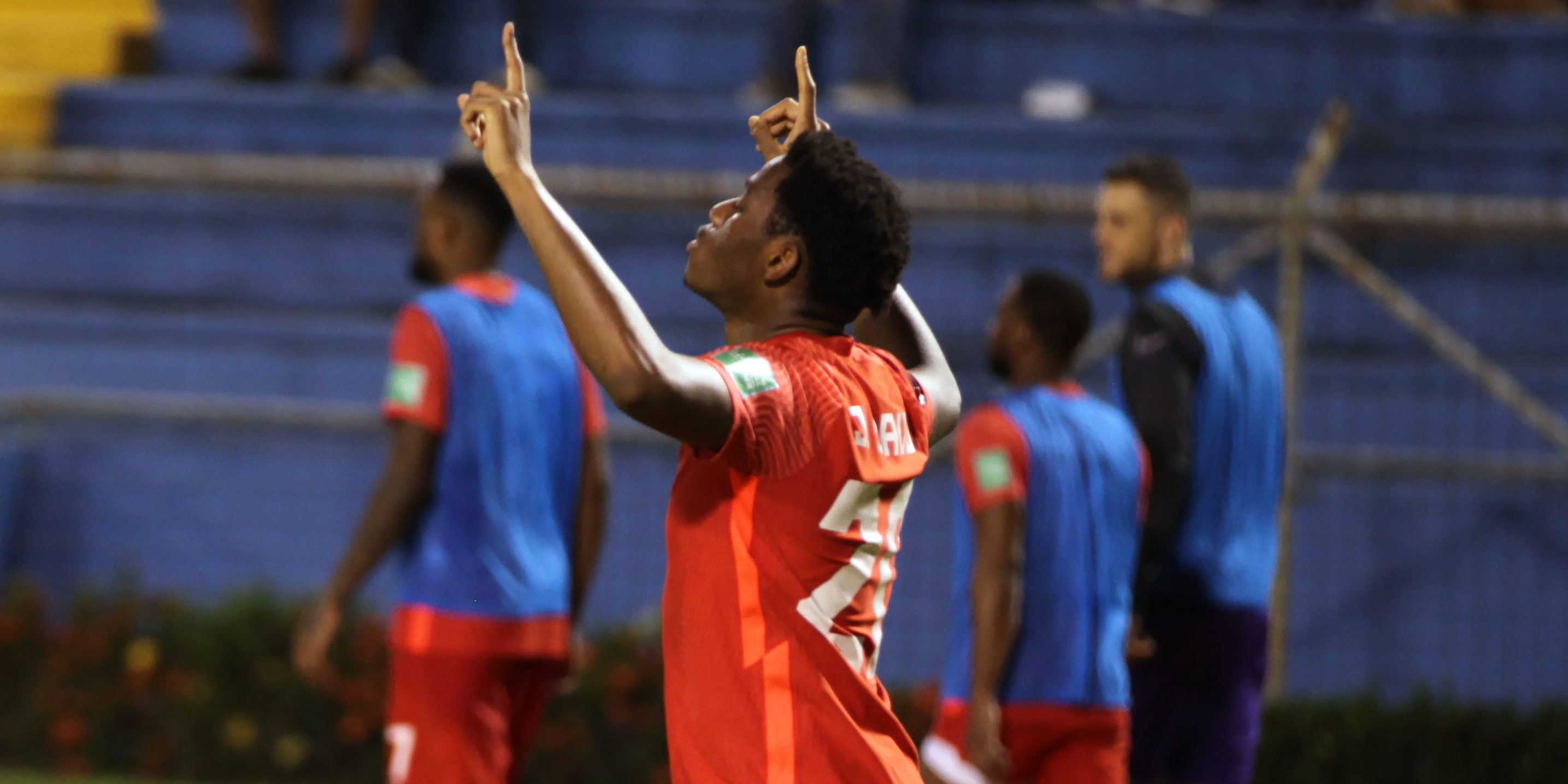 For the first time since 1985, the Canadian men’s national team won away from home in Honduras, as they beat Los Catrachos 2-0 on Thursday to remain top of the Concacaf World Cup Qualifying group with 19 points.

Tajon Buchanan got Canada on the board early, surging into the box from the right flank before flicking a cross off Honduras defender Denil Maldonado and into the net just 10 minutes in. After a scrappy middle section of the game — where the visitors needed some massive saves from Milan Borjan to stay in front — it was Jonathan David who produced the heroics to see things out. He got on the end of a gorgeous long-range pass from Liam Fraser to put himself on goal alone, chipping the keeper to make it 2-0 with 15 minutes to play.

As expected, the Hondurans did not make it easy for Canada on their turf. Though the atmosphere wasn’t necessarily as raucous as it might’ve been, with COVID-19 restrictions limiting the Estadio Olímpico Metropolitano to half capacity, this was still hostile territory. The grass was long, slow, and bumpy, which made it difficult to play quick ground passes and establish comfortable possession, which forced both sides to play direct and over the top — just as the Hondurans wanted.

Canada could cope with that, of course, but perhaps the bigger issue was the intense physicality of the match. Similarly to the home game against Panama in October, Honduras came into this match with tackles flying in from all angles. Tajon Buchanan and Sam Piette, in particular, seemed to take a beating in the first half, with the former’s speed and the latter’s strength on the ball prompting the Hondurans to chop them down repeatedly. Piette took the brunt of a challenge from behind not long before halftime, and the knock was hard enough to rule him out of the rest of the match — a major blow to Canada’s game plan, considering Piette’s ability to hold up the ball and break things up in midfield.

“It wasn’t gonna be that night where the perfect night was there, we had to make it a good bad day,” Canada coach John Herdman said postmatch. “That was the mentality I was setting them up with. There’d be all sorts of things, and we did face a few things while we were here, even prior to the game. We weren’t looking for a perfect performance, but we wanted that discipline and professionalism.”

Referee Daneion Parchment certainly let Honduras get away with some crunching tackles, though the yellow cards did begin to come out in the second half — albeit equally between the two sides, with Canada and Honduras each going into the book three times. Still, at least none of Canada’s cautions went to players at risk of suspension.

The physical play from the hosts definitely hurt Canada’s rhythm at times, and on the narrow pitch there wasn’t much space to avoid such collisions, but the Canadians were certainly prepared for the battle. Piette’s health will definitely be a concern heading into Sunday’s game — especially considering Stephen Eustáquio’s unclear status and Mark-Anthony Kaye’s mysterious absence from Thursday’s matchday squad.

Hesitancy in front of goal a concern, but individual quality saves the day

This was a game that could’ve had a lot more goals in it (for both teams, in fairness). Canada created some excellent chances from quick play into the strikers, creating some numerical overloads and clean looks at goal, but on a few occasions they were a little hesitant to shoot. Cyle Larin, in particular — despite his clinical finishing in previous contests for his country — looked to make an extra pass several times despite a decent look at goal, and Jonathan David produced a fairly weak shot one-on-one with the keeper just minutes before he redeemed himself with his spectacular goal.

Canada could probably stand to simplify things in front of goal and just drive a shot on net rather than look for the perfect opportunity, particularly when they create such chances from quick transitional play — better to get a shot off immediately rather than wait and allow defenders to get back. They had just seven shots on the night despite several more opportunities where they didn’t trouble the goalkeeper.

Perhaps that’s a concern going forward, but it didn’t matter on Thursday night. Tajon Buchanan’s individual brilliance created the first goal — which wasn’t even finished by a Canadian player — and David found his world-class scoring touch with his extraordinary second-half goal. Those skillful elements have often surfaced when Canada have needed them most in this World Cup Qualifying cycle, setting them apart from opponents.

“Watching (David) on that transition, and the goal that he scored — I mean, that was special,” Herdman said of his striker. “I think that’s what this team is, it can balance it out; it can grind and defend, they can hit teams on the counter attack, and on other days it can play. I think we were able to create the mentality that’s required for the moment, and that mentality tonight was to make sure we came out of here, no matter what it took, with a win.”

On David specifically, Herdman added: “He’s a top player in Europe, and to find that player to do the dirty work when they’re coming into environments like this, that’s not easy. I take my hat off to him, you see his running stats they’re right up there, but then he can produce that moment. And it was late, it was quite late in the game, he put a big shift in and he’s still there ready to bring that — I’ve called him it before, that Iceman, that ice in his veins in big moments.”

In the frozen encounter with the United States on Sunday, Canada may look to be more clinical and simplify things in front of goal, as they did in the two games against Costa Rica and Mexico in Edmonton, where they seemed more keen on getting shots off. Either way, though, this side has the talent to create exceptional chances.

Herdman seems to have done his homework before this game, identifying exactly how he expected Honduras to play and delivering a plan to stop them. He knew the hosts would try and strike in transition with the pace and quality of Romell Quioto and Alberth Elis — which undoubtedly did prove to be their plan with dangerous balls over the top for the quick forwards to chase.

However, Canada did an exceptional job of breaking up those transitional efforts before they could become an issue. Atiba Hutchinson (one of the few remaining players from the now-exorcised 8-1 game in 2012), in particular, was a hurricane in midfield, reading spaces well to get in passing lanes and take away opportunities for quick balls forward. Both Piette and Fraser did well in that respect too (though the ball-winning is perhaps more Piette’s forte than Fraser’s), and the front line was able to force rushed balls by running at defenders — Jonathan David in particular covered extraordinary ground without the ball.

Opting for a back five in this game, Herdman gambled somewhat by placing Tajon Buchanan at right wingback, but it paid off in spades. Buchanan was one of the few players on the pitch who could match the Honduran wingers for pace, so he was very capable of getting back in transition and cutting off some of the balls out wide that Honduras tried to play. He was caught upfield a few times, which left defenders Scott Kennedy, Alistair Johnston, and Steven Vitória exposed — and none of them could keep up with Elis or Quioto in that phase — but for the most part Canada kept a very strong shape and limited the threat.

“They’ve never really put (Anthony) Lozano, Elis and Quioto on the field together, we’ve never seen that sort of trio and tonight we did,” Herdman pointed out postgame. “We knew it was coming, and from that perspective we had to match that quality. That back five tonight I thought stood strong; they had some good moments from flank areas, but the thing that they never did — which is what we’ve seen time and time again — is hurt us in that transitional moment.

“Their last five goals have been almost carbon copy, with that one pass in behind to Quioto or Elis, and we never gave them that tonight, and that was the key. We said we would not give them that goal in transition, they’d have to really earn it tonight.”

Of course, Canada needed a few jaw-dropping saves from their goalkeeper to keep their heads above water at times, but Borjan’s experience and talent kept everything together at the back.

Were it not for a few unbelievable saves (none more impressive than his diving free kick stop near the 70th minute), this could’ve gone a very different way. The Red Star Belgrade keeper was a hero for Canada in this match, keeping a glorious clean sheet and leading the team from the back.

After this match, it’s a long trip back up to Canada for Les Rouges, where they’ll take on the United States at Hamilton’s Tim Hortons Field this Sunday, January 30 (3:05 pm ET).