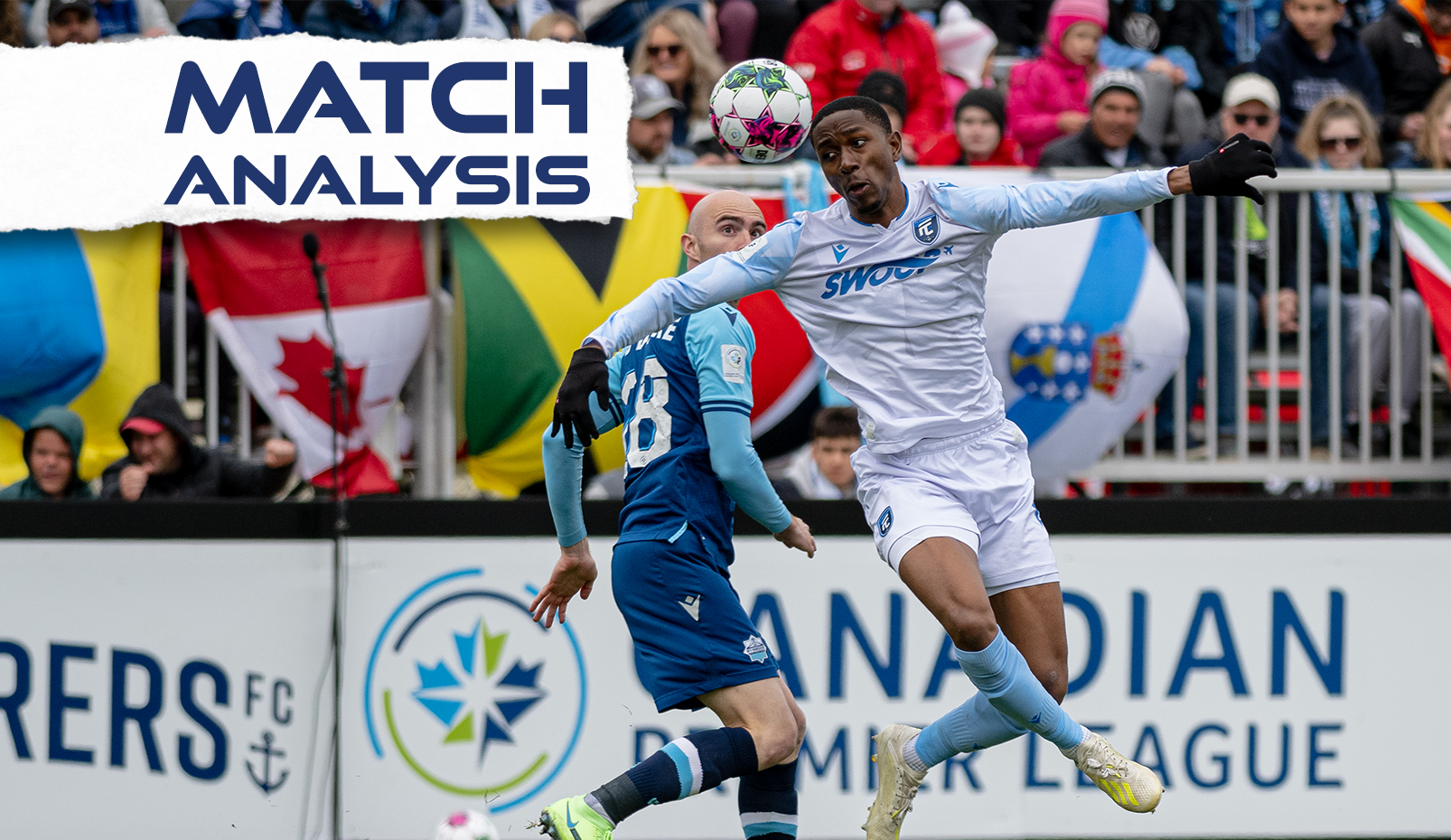 Match in a Minute or Less:

HFX Wanderers opened the home portion of their 2022 season with a victory on Saturday afternoon, beating FC Edmonton 3-1 at Wanderers Grounds.

The Eddies took the lead just nine minutes into the match, as Julian Ulbricht converted a penalty for his first goal of the season, but eight minutes later the Wanderers equalized thanks to a play finished off by Cory Bent. In the second half a goal from Sam Salter and a penalty from Akeem Garcia — both of their first tallies of the season — earned their side a 3-1 victory.

With the win, HFX jump into third place in the table, while Edmonton sit at the other end of the table in seventh.

Zachary Fernandez shines, can follow in the footsteps of some of the league’s best

Young Wanderers right back Zachary Fernandez continued his strong start to the season on Saturday, and played a big part in both of HFX’s second half goals. It was his header on a pass from Pierre Lamothe that set up Sam Salter’s winning goal, and he also drew the penalty that led to Akeem Garcia’s first of the season later in the half.

It wasn’t the first time Fernandez has played at Wanderers Grounds, which he was quick to note in his postgame press conference, as he played 86 minutes in AS Blainville’s Canadian Championship tie against the Wanderers in Halifax last August, and he joked after the match that this time he was “on the good side”, and added that playing at home for the first time this season “was very nice, the crowd was behind us”.

A beautiful ball from Lamothe off of the head of Zachary Fernandez gives Samuel Salter the goal to give @HFXWanderersFC
the 2-1 lead over @FCEdmontonNow
in #CanPL action!

On the other side, Obeng Tabi had a difficult start to the match, giving away a penalty for the second consecutive game, but recovered well and put in a strong performance. The 21-year-old was sharp offensively in particular, and played in a few dangerous crosses, including the one that would lead to the equalizing goal in the 17th minute.

Equalizer for @HFXWanderersFC
as Cory Bent puts one home against @FCEdmontonNow
in #CanPL action!

“I think Fernandez was fantastic,” Stephen Hart said with a smile after the game. “Fantastic. Defensively, and in offence, he was fantastic. Once he learns to deliver that final ball maybe a little bit earlier, or be a bit more patient and look for somebody in the box rather than just whip it across, I think that boy has a big future.

“He has to keep playing, he has to keep fighting, the same thing with Tabi. Tabi is a converted player to the position, so he’s still learning the position. At times he’s a little bit overenthusiastic and it happens a lot with players that are very athletic. Sometimes they don’t recognize that maybe positioning is better than having to chase, but he will learn, and again he needs better final ball delivery. Sometimes he played it across the goal and we couldn’t get on the end of it.

The duo are looking to follow in the footsteps of a handful of previous fullbacks from Quebec who have done big things in the league, including York United left back Diyaeddine Abzi and former Cavalry right back Mo Farsi. Like Fernandez, those two are also former Blainville players.

They both caught people’s eye due to their attacking prowess, but it’s the ability to develop and become strong players on both sides of the ball that turned them into stars in the CPL.

Busy week catches up to The Eddies

After three games in three cities in eight days, FC Edmonton showed some signs of fatigue on Saturday. It isn’t easy to play three games in three days at the best of times, let alone when you have to travel to Ontario, then back west to Alberta, and then all the way east again to the coast.

They took on three difficult opponents as well, facing Forge FC, Pacific FC and then HFX Wanderers – the three finalists from the past two CPL finals. They came away with one point in that span, a 0-0 draw with the reigning champions Pacific at home on Wednesday.

Some rotation was needed, star attacker Tobias Warschewski was among the players that began the match on the bench, but it was undeniable that there were some tired legs by the end of the match. Eddies forward Gabriel Bitar acknowledged the travel after the match, but insisted that it shouldn’t be an excuse for a team that were off to an early 1-0 lead.

An early foul in the box gives @FCEdmontonNow a pen to take the lead over @HFXWanderersFC early in #CanPL action.

“That is our third game in a week, so we did feel a little heavy in the legs,” Bitar said. “We did get off to a good start, scored an early goal, and I feel like we relaxed a little bit in terms of composure. This was our first time going up all season, so I feel like we got pretty riled up and we’ve got to learn from these moments and progress hopefully.”

Bitar is confident in the abilities of his team, and says that with more games together under their belt, they’re hoping to do big things.

“This is our fifth professional game together, we didn’t have a lengthy preseason like other teams, so we’re still trying to get to know each other, our chemistry is still growing,” he added. “We do have a very special group, there’s a lot of talent in this group, and I feel like once we figure it out we’ll be a very good team in this league.”

Pierre Lamothe doesn’t grab the headlines, but is very reliable in Wanderers midfield

Pierre Lamothe may not be the flashiest player in the HFX Wanderers team, but he has the potential to be one of the most important. On Saturday he showed flashes of brilliance once again. He’s a reliable member of the team, and if he takes another step forward this year will become one of the first names on the team sheet.

On Saturday he was part of a midfield trio with Jérémy Gagnon-Laparé  and captain Andre Rampersad, and was a leader on both sides of the ball. He led the team with a passing accuracy of 88%, and also finished first for HFX in tackles won (4) and total times winning back possession (9). Offensively, he was also tied for second on the team for final third entries (9).

It was his brilliant pass over the FC Edmonton backline that created the winning goal for his side. Spotting the run of Zachary Fernandez down the right flank, he lofted the ball on the right back’s head, who  redirected it into the path of Sam Salter for a tidy finish and a 2-1 lead.

A beautiful ball from Lamothe off of the head of Zachary Fernandez gives Samuel Salter the goal to give @HFXWanderersFC
the 2-1 lead over @FCEdmontonNow
in #CanPL action!

Wanderers head coach Stephen Hart wants to see more plays like that from the 24-year-old. He clearly has the ability to play passes like that, but as Hart said in his press conference after the match, he sometimes seems hesitant to take the risk and deliver that final pass.

“He’s a player that doesn’t recognize the qualities that he has,” Hart said. “Sometimes he will give up a pass to one of the more senior players rather than take the initiative himself. I want him to take that initiative.

Fernandez impressed all afternoon from right back, and played a big part in both of the second half goals — assisting the winner and drawing the penalty for the third.

Up next for the HFX Wanderers is an away trip to IG Field to take on Valour on Saturday, May 7 (2 pm CT/4 pm AT). The Eddies return home for the first AL Classico of the season, against Cavalry FC on Friday, May 6 (8 pm MT).