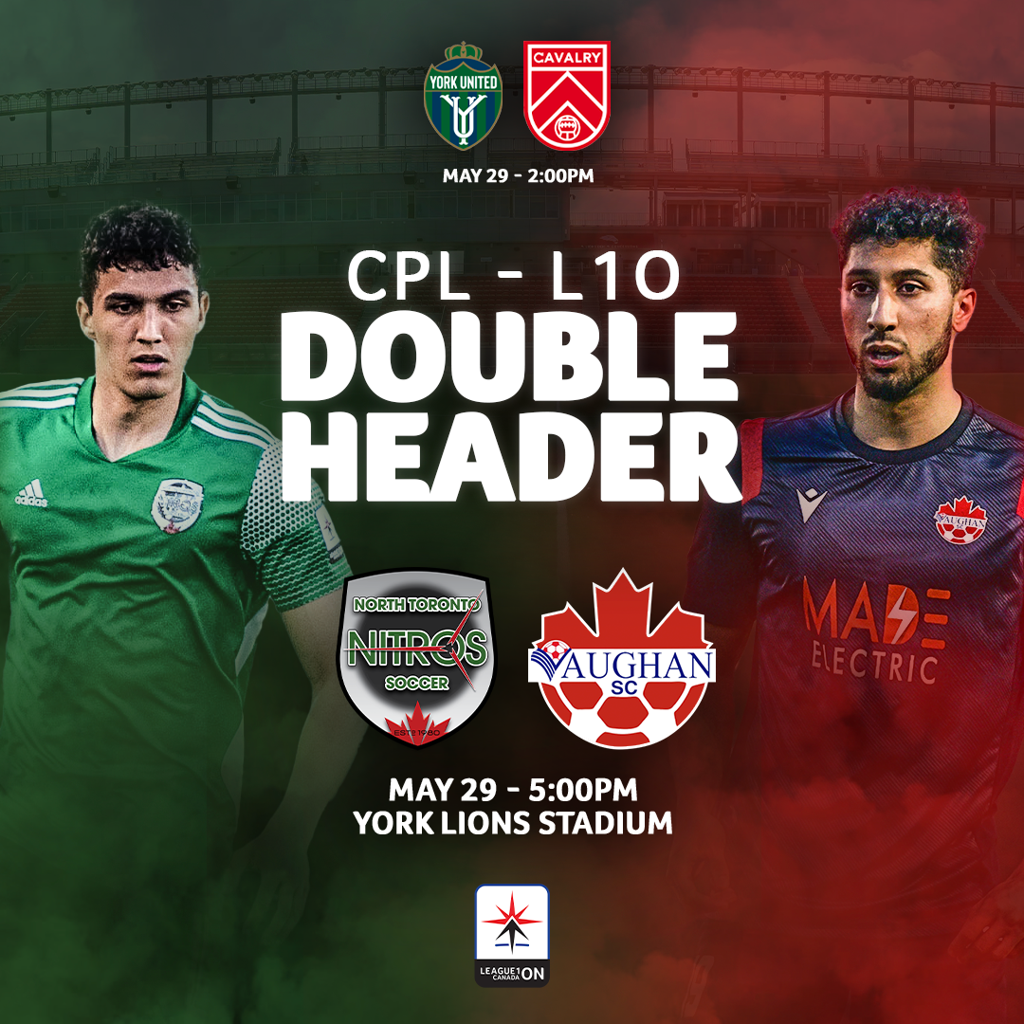 League1 Ontario and the Canadian Premier League have joined forces to stage an exciting doubleheader at York Lions Stadium on Sunday, May 29.

York United will kick off the afternoon’s action against Cavalry at 2pm ET, before North Toronto Nitros take to the field against fellow in-form side Vaughan Azzurri in the L1O Men’s Premier Division at 5pm ET.

The two CPL teams currently share the same record after six matches each with two wins, two ties and two losses, but a run of positive results could help either of them close the gap to early frontrunners Pacific FC.

Meanwhile the Nitros and the Azzurri are currently the two leading teams in the L1O men’s league; the former has a perfect record from their first five games and Vaughan are just two points behind.

The York Lions Stadium was opened in 2015 and is situated on the York University campus. It seats 4,000 people and is used by the university’s varsity teams as well as York United, Toronto FC II, and Major League Rugby side Toronto Arrows.

Tickets for the doubleheader are priced from $18 for adults and $9 for youths. Please click here to buy your tickets: https://l1o.ca/YUdh522

Angus McNab, CEO and General Manager of York United, said: “The opening fixtures in League1 Ontario have been full of excitement and some incredible moments, and we are delighted to host the Men’s Premier Division match between Vaughan and North Toronto.

“I hope it’s the first of many League1 games, including those in the Women’s Premier Division and the reserve competitions, that we host and showcase as doubleheaders this season.”

Marko Milanović, North Toronto Nitros head coach, said: “We welcome the opportunity to play at such a great venue and to be a part of this special event.

“Being one of the youngest teams in the league, many of our players are aspiring to play in the CPL one day. The team enjoyed playing at Tim Hortons Field last weekend, and we’re hoping for a similar experience at the York Lions Stadium.”

Patrice Gheisar, Vaughan Azzurri head coach, said: “Our players, staff and club are so excited about this upcoming doubleheader. We are certainly hoping this is the first of many more as our athletes get the opportunity to play at an elite CPL facility.

“We also hope these events will bring more eyes to these games from CPL coaches as most of our players seek to find a home in that wonderful league. It also shows them there is a real pathway between CPL and L1O and that our league wants to promote its players.”

For more information about what you can expect at York Lions Stadium, please visit the matchday section on the York United website.