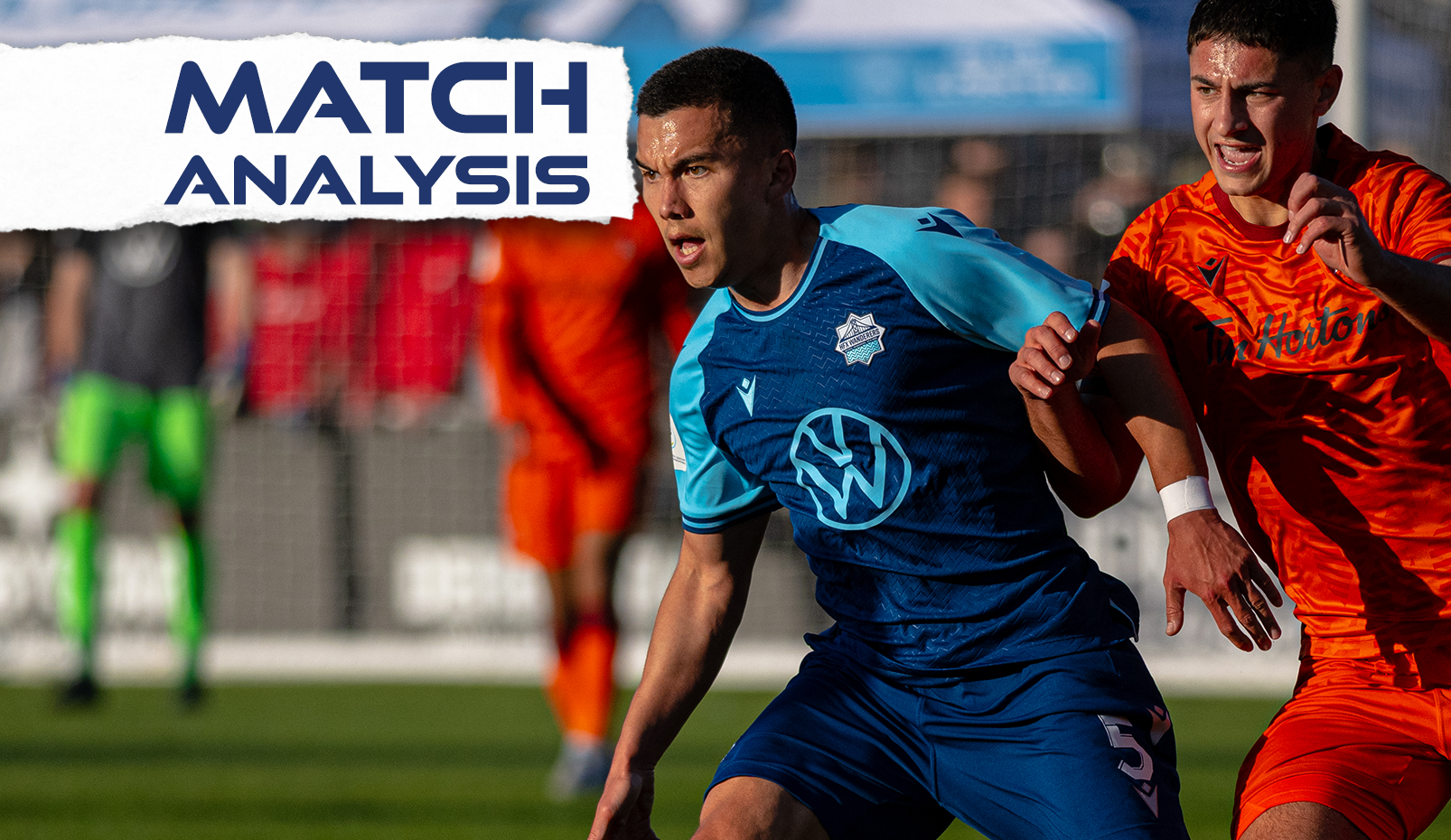 Forge FC were in control in Nova Scotia on Friday night, as they put four goals past HFX Wanderers en route to a very comfortable victory — just their second of the CPL campaign so far. David Choinière put the Hamilton side up 1-0 midway through the first half, but it was in the second frame that the floodgates truly opened, as the Québecois winger added another goal — as did Emery Welshman and Woobens Pacius — and Forge sailed on to win at Wanderers Grounds, just days before both sides move on to play MLS opposition in the Canadian Championship quarterfinals.

Wanderers Grounds has developed a reputation over the years for being one of the most difficult places for a visiting team to go in the CPL. HFX have an excellent home record historically, losing just three of 21 league matches in Halifax heading into Friday night.

That’s partly why it comes as such a shock to see them beaten so handily in front of the Kitchen. Wanderers boss Stephen Hart was, understandably, sombre postmatch, taking the opportunity of his press conference to apologize to fans for a flat performance.

“It wasn’t a tough loss, it was embarrassing,” Hart said. “We were at home. We needed far too many touches to play, we didn’t find the front players, and then when we did have possession of the ball we gave it away cheaply and paid the price for it. We sort of got caught up playing in small spaces and they were way more aggressive, and we sort of played into their hands. They probably won every 50-50 battle out there today.”

Hart’s suggestion that his side couldn’t find the attacking players in dangerous areas well enough was an accurate one; they had just seven touches in the box despite entering the final third 51 times. Forge won the duels battle with 54%, and they were often quicker to get to second balls.

Halifax seemed to really struggle against Forge’s press, in the first half especially, as the Hammers gave them very little time on the ball and stepped forward to defend in unison to remove passing opportunities — although the hosts did manage to break the press a couple of times with long balls up to the wingers, which they never quite managed to convert into dangerous shots.

The Wanderers coach added: “We have to look inwardly. We owe our fans an apology and we let ourselves down. If you look at the performance and you’re truthful with yourself, you will tell yourself, look, we have to do everything to make amends Tuesday.”

Indeed, the Wanderers do not have much time to dwell on this defeat — which might be a good thing. They’ll be back in front of their home fans on Tuesday night when they play Toronto FC in the Canadian Championship quarterfinal. That’s sure to be one of the most difficult contests of the year for this side against MLS opposition, but it would undoubtedly be a perfect opportunity for them to redeem themselves.

The visiting side had a heavy advantage in possession in the opening 45 minutes of this game, and they made excellent use of it, advancing the ball quickly over the halfway line and trying to pick the Wanderers apart with incisive passes.

Forge found a lot of joy in the first half on the right side of the attacking half, playing well over 50% of their time in possession along the right flank. Aboubacar Sissoko, playing as a right wingback once again, pulled the strings down the side and frequently sought to feed it to one of the front three in a dangerous position in the half-space or to the side of the penalty area. Alessandro Hojabrpour, as well, drifted frequently out to that side to help create from just above the box on the right side.

At first, it was David Choinière and Terran Campbell making runs in behind, looking for through balls between the Wanderers’ fullback Obeng Tabi and centre-back Kareem Sow — and both players received excellent service to that area. After about 20 minutes, though, Forge opted to swap Choinière and Emery Welshman to opposite sides — for which they were rewarded with a goal.

Campbell actually spent a lot of time in this match operating as a false nine, drawing Wanderers players out of position and helping open up the space between defenders with his runs.

The opening marker came, predictably, from a ball through the right half-space. This time, it was centre-back Rezart Rama who picked up the ball in the attacking half, and he put Hojabrpour through on goal. The midfielder, finding himself a lot of space by making his run inside the left-back, was able to spot Choinière at the back post.

“We knew that at least one side was always going to be open, having watched them in the past game,” Forge coach Bobby Smyrniotis explained. “It’s the decision of the players to find that area, it wasn’t specifically one side; they had to find that area we could expose, and that’s how it worked in that first half. They gave us a lot of space on the right side and Sissoko and Choinière were excellent in looking at that. The one thing we asked of the guys was that if that side kept on being there, we just have to keep going to it until the opponent adjusts.”

Part of the reason for Forge’s dominance in that specific area was perhaps down to Halifax giving them too much space and failing to cover passing lanes. On more than one occasion, defending players over-committed to a Forge player with the ball, which opened up massive space in behind for another attacker to run into — which Forge took advantage of with a quick pass more often than not.

After playing last weekend against Atlético Ottawa with no natural centre-backs in the lineup, Forge were still a little shorthanded at the back with Dom Samuel and Ashtone Morgan unavailable. Mercifully for them, though, they had a few reinforcements step up in the form of recent signings Malik Owolabi-Belewu and Rezart Rama, who made their first starts for the club.

Owolabi-Belewu lined up at left wingback in Forge’s 3-4-3 formation, while Rama played on the right of the back three alongside Garven Metusala and Alexander Achinioti-Jönsson. It’s remarkable how quickly both were able to find their tactical footing in the team — especially Rama, who only began training with the team this past week — but Forge have proven in the past that they can integrate new players very quickly midseason (as they did with Woobens Pacius, Joshua Navarro, and Omar Browne last season).

Although much of Forge’s attack went down the right side and Aboubacar Sissoko, Owolabi-Belewu still saw plenty of the ball out on the left. He won a team-high 11 duels and had three successful dribbles, winning three tackles as well. One of his runs in particular in the second half nearly created a goal for Forge, as he looked confident on the ball and hungry to contribute to the attack.

Rama, as well, was impressive — and not just because of the secondary assist he provided for Choinière’s first goal (although that pass to Hojabrpour does deserve praise). The young defender was comfortable on the ball, passing with 88% accuracy — 91% in the attacking third — and he won possession six times.

Forge are a team whose tactical identity is founded on their ability to play out of the back, regardless of formation. So, seeing that these newcomers are able to progress the ball confidently and accurately and fit into the required structure of the team is incredibly positive news for Bobby Smyrniotis — who will undoubtedly have scouted both players and brought them in specifically for their ability with the ball.

“Last game against Ottawa we had no natural centre-backs, so it’s good to get one in the lineup,” Smyrniotis quipped when asked about Rama’s debut. “He’s come over, trained this week, and he’s fit in great with the group. He’s a player that we’ve scouted well, watched very well over the last year or so, and the opportunity came up to bring him over here. He’s a quality player, today’s a small glimpse. This young man is excellent and we expect him to be an important piece of how we defend and also how we play out.”

It’s hard to earn this nod from just 65 minutes of work, but Choinière was brilliant on the wing for Forge, scoring twice and helping set up another goal. He had eight touches in the box (more than HFX’s entire team), four successful dribbles, and he won five out of seven duels.

Up next for both teams are massive Canadian Championship quarterfinal ties against MLS opposition in midweek. The Wanderers will host Toronto FC on Tuesday (6 p.m. ET/7 p.m. AT), while Forge will head to Québec to take on CF Montréal on Wednesday (7 p.m. ET).