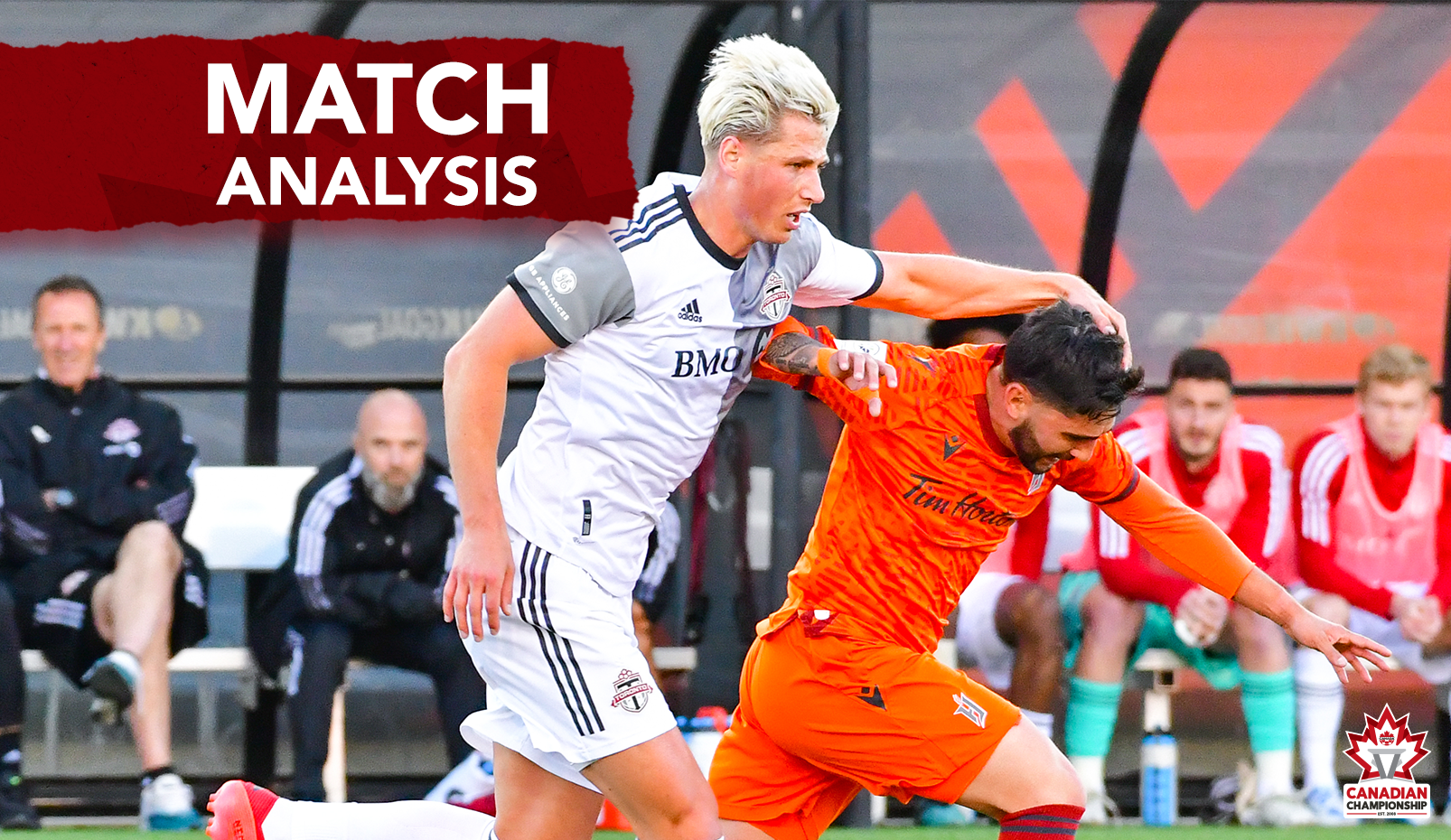 The Voyageurs’ Cup has returned to Toronto for the eighth time, as Toronto FC defeated CPL side Forge FC on penalties at Tim Hortons Field on Saturday in a contest for the 2020 Canadian Championship Final.

After a back-and-forth first half which saw Forge denied from the penalty spot, TFC took the lead shortly after halftime thanks to a long-distance strike by Alejandro Pozuelo. Just over two minutes after, though the Hamilton side drew level thanks to a sizzling strike off the left foot of Tristan Borges.

With neither side managing to find the net again in the 90 minutes, the game proceeded to a penalty shootout. Though Forge took a brief advantage with Deandre Kerr’s miss, TFC came back into it when Kyle Bekker’s attempt was saved. In the first sudden-death round, it was heartbreak for Forge as Kwasi Poku’s shot came off the bar and just barely missed crossing the line, as TFC were crowned Canadian Champions.

Just as it was last time Forge hosted an MLS team in Hamilton, an incredible performance went ultimately unrewarded on Saturday as the night ended in penalty shootout heartbreak.

This feeling is all too familiar to the handful of Forge players who were with the club for both their loss to Arcahaie in the Concacaf League and to CF Montréal in last year’s Canadian Championship, though the past stings will take nothing away from that of this particular night. Still, it must be with immense pride that Forge’s players left Tim Hortons Field on Saturday night.

Bobby Smyrniotis echoed that sentiment in his postmatch comments; he went as far as to say that Forge dominated significant periods of the match, which they undoubtedly did — particularly in the middle of the pitch (more on that later). They’ll certainly be left contemplating what could have been, particularly after Tristan Borges’ early missed penalty and the breakaway chance in the second half that Terran Campbell couldn’t convert, but it’s not what they’ll dwell upon.

Instead, Forge is sure to dwell on the fact that they took an almost full-strength Toronto side to penalties and delivered likely their best performance yet in 2022 on a massive stage.

“I think we’re the dominant team on the field for 90 minutes,” Smyrniotis told reporters. “The guys were excellent; tactically we were very good, I don’t know what the shot count is but if you look at the chances both on goal and off the goal, especially in the zones we were getting at out there it was a very good performance from the guys.

“I just talked to them and they have to be proud of it. It’s going to be tough for this evening, but you perform like this, you win a lot of games, that’s for sure. It stings in the end, the way the result goes, but that’s the cruelty of this beautiful game. That’s why we love it and that’s why I think for a lot of the people sitting in the stands today, they walk away from here being quite entertained.”

On the other side, TFC will leave with a trophy they’ve now won eight times. This one, though a strange situation, is nonetheless meaningful — especially given that they claimed it in a penalty shootout, earning a modicum of redemption after several heartbreaking losses of their own the past few years (from MLS Cup in 2016, to the 2018 Concacaf Champions League Final, to the 2019 Canadian Championship).

TFC manager Bob Bradley added that winning a trophy — especially for a young team like his going through a rough patch in league play — carries monumental significance.

“It’s important. There were guys that were here in 2020, so obviously they are responsible for getting a team to a final, and then you have a new team right now that has a chance all of a sudden early in the season to play in a final,” he said. “Coming here to play against Forge is always going to be hard, they’re a good team. They’re experienced, with the games they’ve had in Concacaf League and the Champions League, they’re tested in these kinds of games.

“The experience for the group is really important, and for the club and its supporters; the history of TFC in this last stretch in the Canadian Championship, being able to add to it today, those are all great things.”

Knowing that this match could be won or lost in midfield, Forge gaffer Bobby Smyrniotis opted for an interesting tactical tweak in the centre of the park to try and create some space and free up certain players to slip in between lines.

Similar to the setup they used on Tuesday against FC Edmonton, Forge’s midfield consisted of a trio with Alessandro Hojabrpour and Kyle Bekker at the base and Aboubacar Sissoko usually a little further forward, almost playing as a number 10. However, the directive seemed to be for Hojabrpour to primarily hold things down at the back and allow Bekker to roam, especially toward the left half-space where he could link up with Tristan Borges.

The main benefit to this system, for Forge, was a numerical advantage in the middle that divided the attention of TFC midfielder Michael Bradley. The Toronto captain spent much of his time marking Sissoko, which gave Bekker more freedom to drop into open pockets and find good places to receive the ball.

“They were very good in their movements, their pressing points,” Smyrniotis agreed. “Abou is a very good midfielder, we’ve seen him playing especially in the past in this league and in that role in his university career, he’s a midfielder who comes in here and he’s playing right-back and everyone forgets about how good a player he is — and he’s one of the best right-backs in the league while he’s doing it. We’ve slotted him back into midfield, and it’s very good.”

Both midfielders were exceptional on the ball; Bekker created five chances and Sissoko created four (including the assist on Borges’ goal) and their pass success rates were 93% and 97%, respectively. With Michael Bradley pulled between the two midfielders — and no Jonathan Osorio to take some of the load off the captain — Bekker and Sissoko had a lot of room to operate and create.

Smyrniotis added: “I think tactically we read the game and the guys executed very well. The first 25 minutes TFC was in a diamond, so we had prepared for a diamond and in a three, and I thought we were dominant while they were in a diamond because the guys did excellent getting into the right zones, and then we did the same thing once they switched into a three.”

Unfortunately for Forge, they weren’t able to convert more than one of their chances generated from the positive play in the middle, but they’ll nonetheless be extremely heartened by the positive signs from this midfield trio they’ve clearly wanted to establish since the beginning of the season.

After struggling for stretches in the first half, Toronto FC came out of the break red hot. Bob Bradley altered his system a little by putting Jacob Shaffelburg into the game in place of Jayden Nelson, but the greater change was in their tempo and intensity.

The Reds began to be much more direct with the ball, trying to attack Forge’s fullbacks more aggressively, and the energetic tactic certainly paid off quickly — Jesús Jiménez nearly scored just a couple minutes in with the ball loose in the six yard box, and again five minutes later Malik Owolabi-Belewu had to make a perfectly-timed slide tackle to turn away a chance. The second phase of that play, though, resulted in the ball coming to Alejandro Pozuelo at the top of the box (with TFC getting a lot of numbers forward), and the Spaniard blasted into the goal from distance.

To Forge’s immense credit, though, the goal seemed to bring them back to life. It took them two minutes and thirteen seconds to get back up to the other end of the pitch and equalize, thanks to Aboubacar Sissoko’s perfect ball over the top and Tristan Borges’ powerful finish — though recognition must also be given to Alexander Achinioti-Jönsson’s dummy run into the box, which attracted the centre-back’s attention and kept Borges unmarked.

“We’ve got to have a mentality to stick together and find ways,” Bob Bradley said. “I thought we started the second half really well, scored a really good goal; I hate to see us then so quickly give up the next goal. We just didn’t do well sorting things out between Lukas (MacNaughton) and Kosi (Thompson) and now Tristan is able to slip in there; obviously if you let him take a ball down in that spot, he’s a good finisher and he’s got a great left foot.”

After Forge’s equalizer, the hosts once again took control of the game and dominated, enjoying the majority of chances for the final half-hour. Though they had slightly less possession overall than TFC, Forge outshot their opponents 18-11 (10-5 in the second half), and had a heavy advantage in expected goals in both halves.

“A lot of times when things aren’t going well in a game, players and teams have the tendency of going away from it. It’s one thing I’m trying to instill even more in the players is to stick to what we do. If 95% of training we do certain things, why are you going to change that 50% of the time in the game?”

Forge had to survive multiple moments of adversity in this match, of course; Tristan Borges found himself redemption by scoring after missing his early penalty — a disappointing moment that could have dampened Forge’s spirits — and the side in general fought tooth-and-nail to re-establish dominance after TFC came at them so hard in the first 15 minutes of the second half.

The midfielder was astonishingly dominant in midfield, finishing with four chances created, a 97% pass accuracy, three successful dribbles, and seven duels won. He also picked out a tremendous pass to Tristan Borges to assist Forge’s goal in the second half on an altogether impressive night for the 25-year-old.

Watch all CPL and Canadian Championship matches live on OneSoccer. In addition to its website and app, OneSoccer is now available on TELUS channel 980 and on Fubo TV. Call your local cable provider to ask for OneSoccer today.