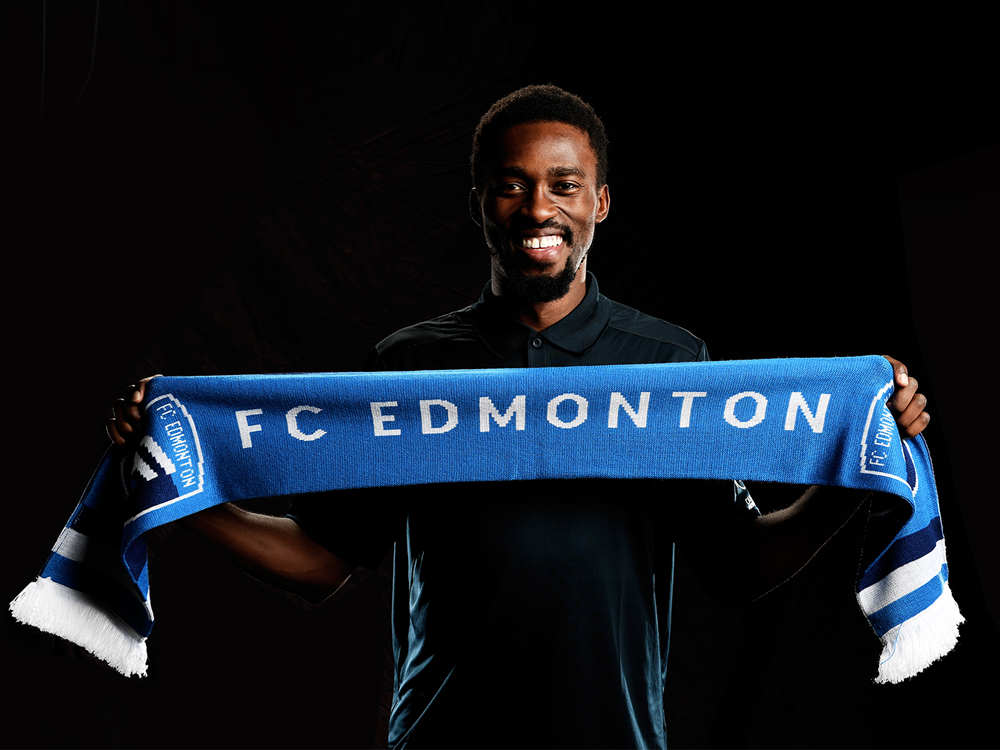 When Tomi Ameobi arrived in Canada in 2014, there was just something about the place that felt like home.

“I had a feeling that I was going to be here for a long time,” recalled Ameobi, who arrived to begin what would be a four-year spell in the NASL with FC Edmonton.

Five years later? He’s working on his permanent residency. He and his Canadian wife, Andrea, have a six-month-old daughter, Grace. He’s currently living with his in-laws on an acreage in Sturgeon County, a rural area north of the Alberta capital.

Five years ago, he had a feeling that Canada was going to be a special place — but could he have ever imagined he’d start a family here?

“If you would have told me that, I would have said, ‘you’ve got the wrong guy!'” laughed Ameobi.

After spending the 2018 season with FC Cincinnati of the USL, Ameobi has returned to FC Edmonton. He was one of five players unveiled by the club on Thursday.

Jeff Paulus said that on the very day he was named head coach, he knew he wanted to bring Ameobi back.

It wasn’t just that Ameobi is great at holding up the ball and will be needed to play with his back to goal. It’s not the fact he scored many of his 21 career NASL goals with FC Edmonton with his head, leaping over opposition defenders. It was about what Ameobi could bring to the club not only in the inaugural Canadian Premier League season, but after that, as well.

“When you are building a club, there’s a danger that you can go all out in year one and ignore the big picture, which is the long-term development of the club,” said Paulus. “You want to be competing in year one, but building a foundation for future years, as well. You want the club to develop a culture. And Tomi brings that immediately.”

After the NASL went on hiatus at the end of the 2017 season, and FC Edmonton paused its first-team operations, Ameobi eventually found work in Cincinnati. But, he said that by the time he got to camp, the roster was pretty well set, and he had to spend much of the year biding his time on the bench. While he was in Cincinnati, he kept in contact with his Alberta-based former FCE teammates, getting status reports on the nascent CPL.

“I think footballers get a feeling of entitlement sometimes, especially when it comes to playing time,” said Ameobi. “Cincinnati was a good lesson for me — that I’ve got to work hard every day. Nothing is going to be handed on a silver platter to me.”

Fans in Edmonton are very familiar with Ameobi; but for those who will see FCE for the first time in the new league, that last name sure sticks out. Yes, he’s part of Newcastle United royalty — his brother Shola made more than 300 appearances for the Magpies. Brother Sammy played more than 50 times for Newcastle United, and is currently with Bolton Wanderers.

Does that surname bring any extra expectations?

“I try not to think about that side of it,” said Ameobi. “It can really put unnecessary pressure on myself, and I have let it get to me at times in the past. I look at my brothers as role models, and I can pass some of that knowledge onto the next generation of footballers.”

One thing neither Sammy or Shola can match is Tomi’s excellent goal-scoring record in the Canadian Championship. With five career goals, he’s tied for second behind Sebastian Giovinco (six goals) for the all-time lead — at least since the Voyageurs’ Cup was awarded through a free-standing tournament. He’s tied with the likes of Toronto FC’s Jozy Altidore and Jonathan Osorio.

“I think it’s an experience that can’t be matched, playing on a weeknight under the floodlights,” said Ameobi. “It reminds me of the big matches back in the U.K. … It’s something we’re going to take very seriously, and I want to do my part to help the team advance. And that means I need to get on the end of balls and finish the chances.”

Not only is Ameobi a father, husband and professional footballer, he’s a student, as well. He’s got about a year and a half’s worth of online classes left before he can get his law degree.

But, before Ameobi takes to the courthouses, he’ll be on the pitch again, sporting the blue of FC Edmonton.