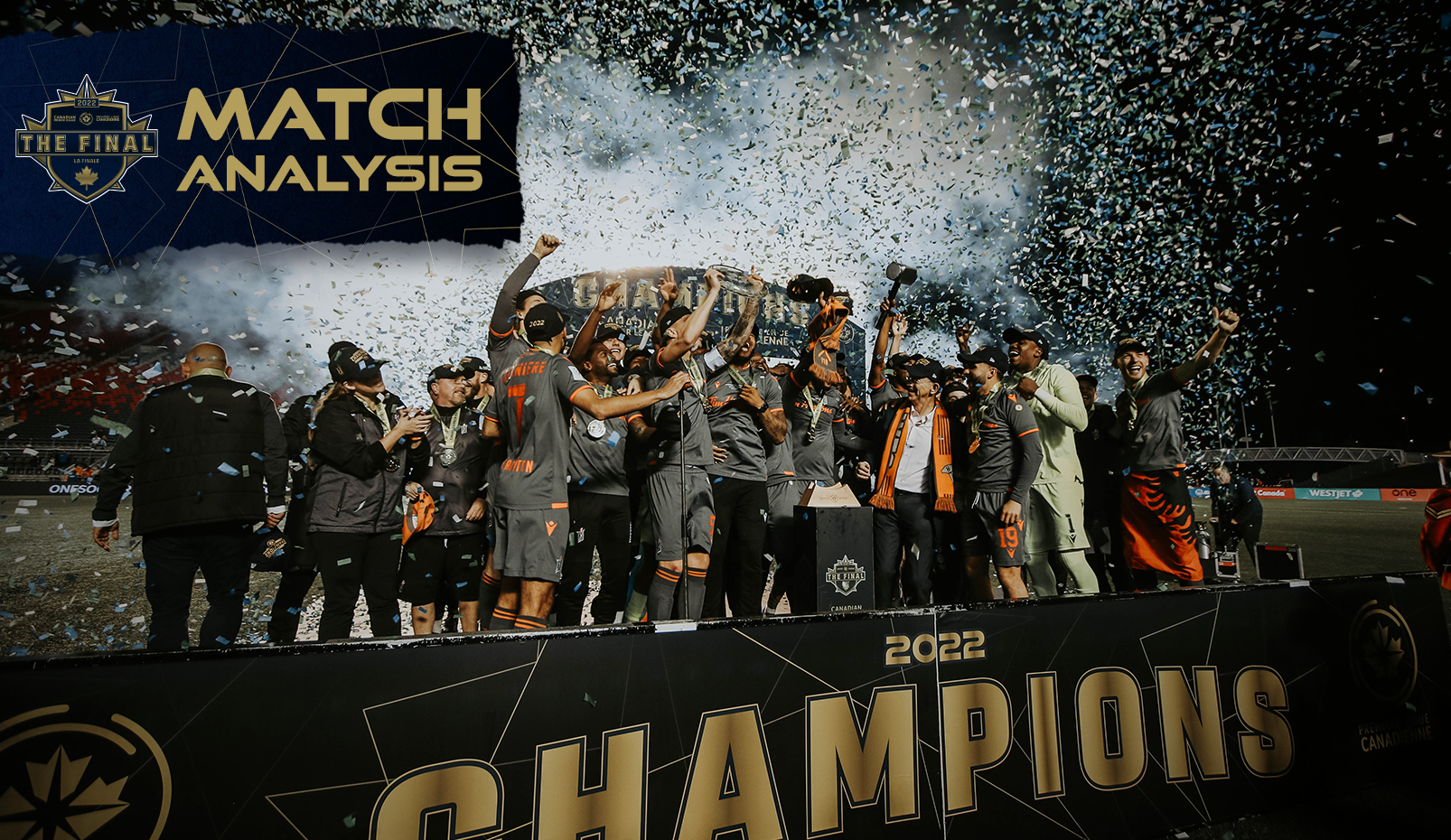 Forge FC lifted their third North Star Shield in the Canadian Premier League’s four years after a 2-0 victory against Atlético Ottawa in the 2022 final.

For the second straight final, Alessandro Hojabrpour opened the scoring from a header off of a free kick, however this time to the delight of the Hamilton side’s supporters after scoring an eerily similar goal against them in last year’s final. David Choinière put the match to bed in the dying moments after a brilliant bit of dribbling.

Despite the loss, it was an excellent season for Atlético Ottawa. After finishing last place during the 2021 season, they won the 2022 regular season title, and made it all the way to the league’s final. The impact that the side has had on the Ottawa community was evidenced by the incredible crowd of 14,992 that was in attendance for the final at TD Place Stadium.

Hojabrpour, Choinière step up again in the big match as Forge win their third title

“Everyone is unique in its own way,” said Forge FC head coach Bobby Smyrniotis at the full-time whistle. “First of all, it is the players, the group that you have. Each year it is a little bit different, this year it is a lot different than last year. And it is fantastic. It is a great feeling, and it is a feeling that we have been blessed to have over these last four years quite a few times and we want to keep it going.”

In a match that was always going to be tight between the league’s two best defensive teams, this year’s final was always going to take a few moments of magic to open it up. Forge was able to create one on either side of half-time. One came from Hojabrprour, who scored in last year’s final, while the match was put to bed by Choinière, who has now scored his ninth goal in knockout football for Forge FC.

“You see Choinière, he has been doing it for four years,” said Smyrniotis, who called also his attacker the ‘magic man’. “You know on a day like these you need guys like him, Tristan Borges, to be really good, really be good on the ball in the attacking moments because that would be able to drive them a little bit further back in the box.”

For his part, Choinière was also asked after the second leg of this year’s semi-final against Cavalry, in which he also scored, why he is able to consistently step up in these big matches. He still doesn’t really have an answer but says that crowds like Sunday’s have always helped raise his level. Not only that, but they will continue to raise the level of soccer in this country.

“I think the more stress there is, the calmer I am,” said Choinière.”I love a full stadium, it was a beautiful night. I don’t know how many people there was in the crowd but if we can play every game like that in a couple years it is going to be amazing for soccer in Canada. That is what we should look for, and those are the best games. The crowd, having Forge on one side, Ottawa on the other side it is just amazing for soccer in Canada.”

Going into the final, Smyrniotis mentioned he can sleep easy at night knowing that he already has two Canadian Championship titles. Now that he has collected a third, and knowing all the work that went into this long season for the club, he says those sleeps are going to get even easier.

“I’ll probably sleep for two days straight,” said Smyrniotis. “We have been going for a while here. If you take the end of last year into this year, short turnaround in the preseason, Champions League, what a fantastic season for the club. Today is great but you look at where we started, playing against Cruz Azul, playing in a Canadian Championship final in the middle of the season. We keep on doing great things as a club, and we want to continue.”

There were no real secrets coming into this match as to how Atlético Ottawa was going to hurt Forge. It would be how they had done it all season, absorbing pressure and then finding their key attackers in transition when the Hamilton side made mistakes.

Forge, however, countered this brilliantly over the course of 90 minutes by remaining patient and making sure that even when Ottawa got the ball, they had plenty of players behind the ball. Ultimately, they limited the hosts to just three shots on target and 0.33 expected goals.

“We just needed to be patient, the one thing I asked the guys was to be patient,” said Smyrniotis. “There were two moments in the match where we weren’t and we gave up the ball, and that is what Ottawa feeds off of.”

A side that usually likes to be on the front foot for most of the match, Forge also showed good patience when they didn’t have the ball. Ottawa had a somewhat surprising 45.4 per cent possession, given the history of the fixtures between these two sides, but was more often than not unable to get into truly dangerous areas.

“If they were put together a five-ten fifteen passes, just be patient,” said Smyrniotis. “We thought that that ball would come back to us, whether it be from a miss pass or something. That is something they aren’t used to in their game to do for long periods of time. So as a team, you have to be comfortable doing that, and I think that is tactically something that the boys got right on the pitch today. They kind of sat, they were patient with it, closed up the areas and really made it difficult for guys like Ballou [Tabla] and Ollie Bassett to find spaces in between the lines.”

Even when Forge had the ball, they had to constantly be aware of Ottawa’s danger men. Rezart Rama, particularly in the first half, did an excellent job of marking Tabla and making sure he was there to put pressure on the Ottawa attacker should he receive the ball.

“We had to know where those two players were on the pitch in transition moments,” said Smyrnotis. “You have seen time and time again throughout the season that has kind of been their major way to get out, and they have been absolutely lethal in doing that in games. So when it comes down to a game without tomorrow and that’s what these championship games are, those are the little differences and the little nuances that make the big difference in the games.”

Choinière echoed his coach’s thoughts, he said that given the number of times they met their opponent this season, they were finally able to perfect this approach for the final.

“We play them four times this season, we knew exactly what kind of game it was just about getting in behind, getting our corners, getting our free kicks, just getting in behind and obviously they were going to try to go on counterattacks against us. It was just about having good shape, and making sure they don’t hurt us, if we kill that, we were going to win that game, and that is what happened today.”

Atlético Ottawa outdone by Forge on the ‘details’, but take pride in growth of soccer in the city

Knockout matches like Sunday’s often come down to which side can control the details better, and the 2022 Canadian Premier League final was no different.

“I think they have been much better his than us in the details,” said Atlético Ottawa head coach Carlos González. “We conceded too many set pieces in the first half, this was one thing that we knew couldn’t happen because we were going to give them the chances to score in that way. We conceded too much, and then once you receive one goal against Forge, they start to play the game that they want, because we start to concede more spaces. We knew that taking risks in some moments, these types of chances, like the chance of the second goal, could appear.”

Atlético Ottawa captain Carl Haworth agreed with his coach’s assessment of the match. He said that in moments, Atleti’s defensive culture which has been their hallmark all year let them down.

“They were very good in those moments that could have gone either way, and we didn’t defend great as well as we probably should have,” he said. “So we knew coming it was going to be a very tight game, very few chances were going to be in this and it was going to be decided by those small moments, and those little details that went their way today.”

Regardless of the way it ended, both Haworth and González said this was a special season for the club, one where they took a significant step forward. The goal now will be to build on this progress for next season.

Seeing the way the crowd grew from the club’s first match of the season to the final was incredibly special, and a sign of the growth of the club both on and off the pitch.

“I think that what we created in the city has big, big value,” said González. “I think that it has to be the base for the next season, and for the growth of the club.”

González says his staff and players will take a bit of a break after a long reason, before coming back in a few weeks to learn from this experience. He truly believes it won’t be long before they reach another final.

“We have to learn, because it is true that maybe we have players with a little bit less experience in these situations,” he said. “So it is a thing that we have to acknowledge, to learn and to improve for the next season. Because the next season we are going to be back I am sure.”

In big games, there is no Forge player who has shown up as consistently as David Choinière. The attacker scored a critical late goal to cap off an excellent overall performance that saw him make 21 passes into the final third, complete three successful dribbles and won 11 of his 15 duels during the match.

This concludes the 2022 Canadian Premier League. Both sides will take to the pitch to start the 2023 campaign next year.