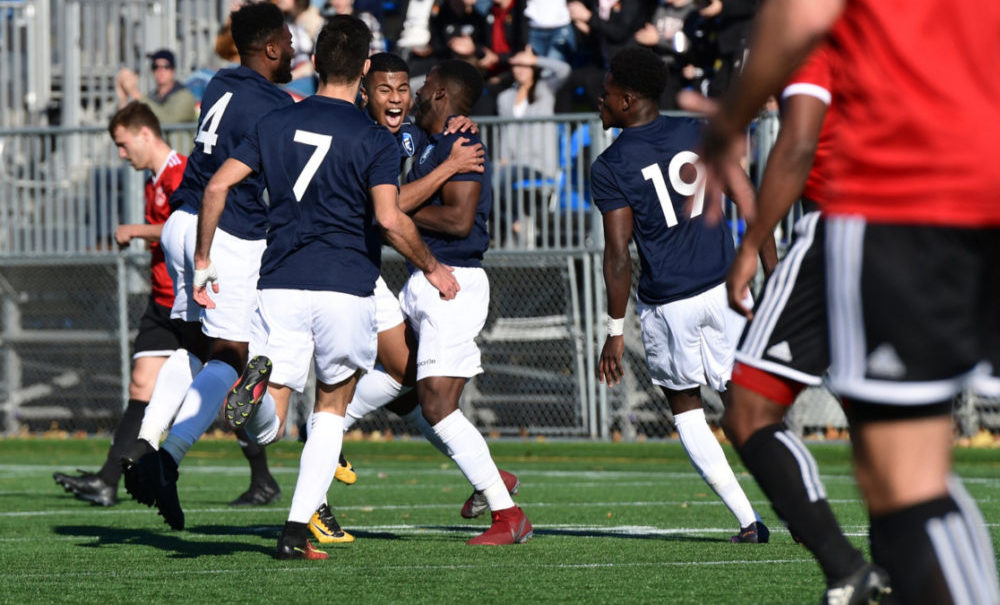 Rob Gale’s side opens its home slate at Investors Group Field with a crucial CPL fixture that doubles as a CONCACAF League qualifier in an expedited, 10-match Spring season in which every match matters as clubs pursue a guaranteed berth into the league’s inaugural championship. Out of breath yet? Plus, FCE coach Jeff Paulus has pumped up his players more than any of his colleagues — a subplot that makes me even more interested to see how FC Edmonton competes in its first league fixture.

The first Al Classico at Spruce Meadows will be something to behold. Distance is no longer a factor for FCE fans willing to travel to support their club. I envision a packed venue for the occasion, and this match meaning quite a bit more regardless of where these two sides sit in the standings after three weeks of play. If one of these sides enters May 18 without a win it could provide an opportunity for a rival to spoil their opponent’s Spring season.

The secondary prize three CPL clubs are chasing in May and June is a spot in CONCACAF League, meaning this final Spring tilt between two clubs involved in the qualification process could be massive in terms of determining both a Spring winner and a CONCACAF qualifier. A dream scenario would see these clubs sitting Nos. 1 and 2 in both the Spring standings and the CONCACAF League qualification standings entering this match.

The talk in Toronto building up to the start of the Canadian Premier League, in regards specifically to most desirable away trips, is almost entirely circled around a visit to Halifax, especially in the summertime. So, for my money, this mid-summer clash between big-city York9 and the humble Wanderers of Halifax isn’t just a chance to see Jimmy Brennan take on his mentor Stephen Hart on the pitch: It may also be the funnest and most festive fixture of the season. Hopes are renewed on July 6 as the table resets for Fall, so spirits should be high regardless of previous results, too.

To be perfectly honest, Rob Gale’s outfit remains a mystery to me. But, I figure this match is a good mid-point mark where a decent assessment of Valour FC can be made, and the end of July should set the tone for the rest of the season, too. This particular clash pits together two teams who have taken local representation to another level – community is a huge point of focus for both. So there’s pride on the line in Winnipeg, and if Gale’s got the sort of coaching chops suggested through his early interviews, this could be the day he and his team emerge atop the pile.

Second-last matchweek of the season, and, based on how these (albeit still incomplete) rosters are shaping up, I reckon Forge and Cavalry could be in a close Fall title chase down to these final few matches. As such, this could prove a crucial fixture in the standings, where points are sparse and any wiggle room clubs had in the table has almost certainly vanished. Tommy Wheeldon Jr.’s side will be tested away from home, but if there’s a “title-watch” on offer this late in the season, this might be it.

HFX Wanderers are too special to ignore. There are no other stadiums, supporters, cities or clubs I’m more excited for. Wanderers Grounds is going to be incredible, and this home opener against Forge FC will be the cream of the crop. I’d take Stephen Hart and co. to get a result here, too. Forge will certainly be talented in 2019, but the Wanderers will have magic (and the force) on their side on May 4.

Canada Day, the final day of the Spring season, is going to be a massive day. Of the three simultaneous kickoffs that afternoon, Pacific-Cavalry is the one to watch. I like the way these clubs are coming together — and I predict they will both be in the hunt on that final day. With tensions high, it will be up to the clubs’ veteran leadership, the likes of Nik Ledgerwood (Cavalry) and Marcel De Jong (Pacific), to try and focus their sides in the pursuit of what could be a season-winning result.

Al Classico? On the last day of the Fall season? On a potentially windy, cold day in Alberta? I love it! FC Edmonton and Cavalry FC will compete in the longer of the two seasons, giving this matchup championship implications. This is also set to be the fifth and final league match between the Al Classico rivals, meaning we could see bragging rights awarded to the winner.

For my money, these sides are the two most ready-made. Cavalry ride into the debut CPL season having absorbed a 2018 PDL Championship-winning Foothills FC team; York9’s roster has added pedigree to the skeleton of the 2018 League1 Ontario champions, Vaughan Azzurri. Both have made very shrewd player acquisitions and maintained their title-winning coaches in some capacity as well.

Yes, two of my tips are for Calgary at the Spruce, but who can resist the mystique captured in the term ‘Al Classico’? FC Edmonton joins the CPL with a very robust organization and raucous fan base following their NASL days. Calgary, as mentioned previously, are 2018 PDL champs and look like stone cold quality to me. Anyone that has spent any time in Alberta knows the rivalry between these two cities.

It’s being called the 905 Derby but let’s see if there’s a bit of Route 66 involved. My feeling is that when Forge hit full stride by mid-summer, in front of a packed house at Tim Hortons (buzzing from an afternoon on the local patios), we will see the massive potential of this Southern Ontario rivalry in technicolour.