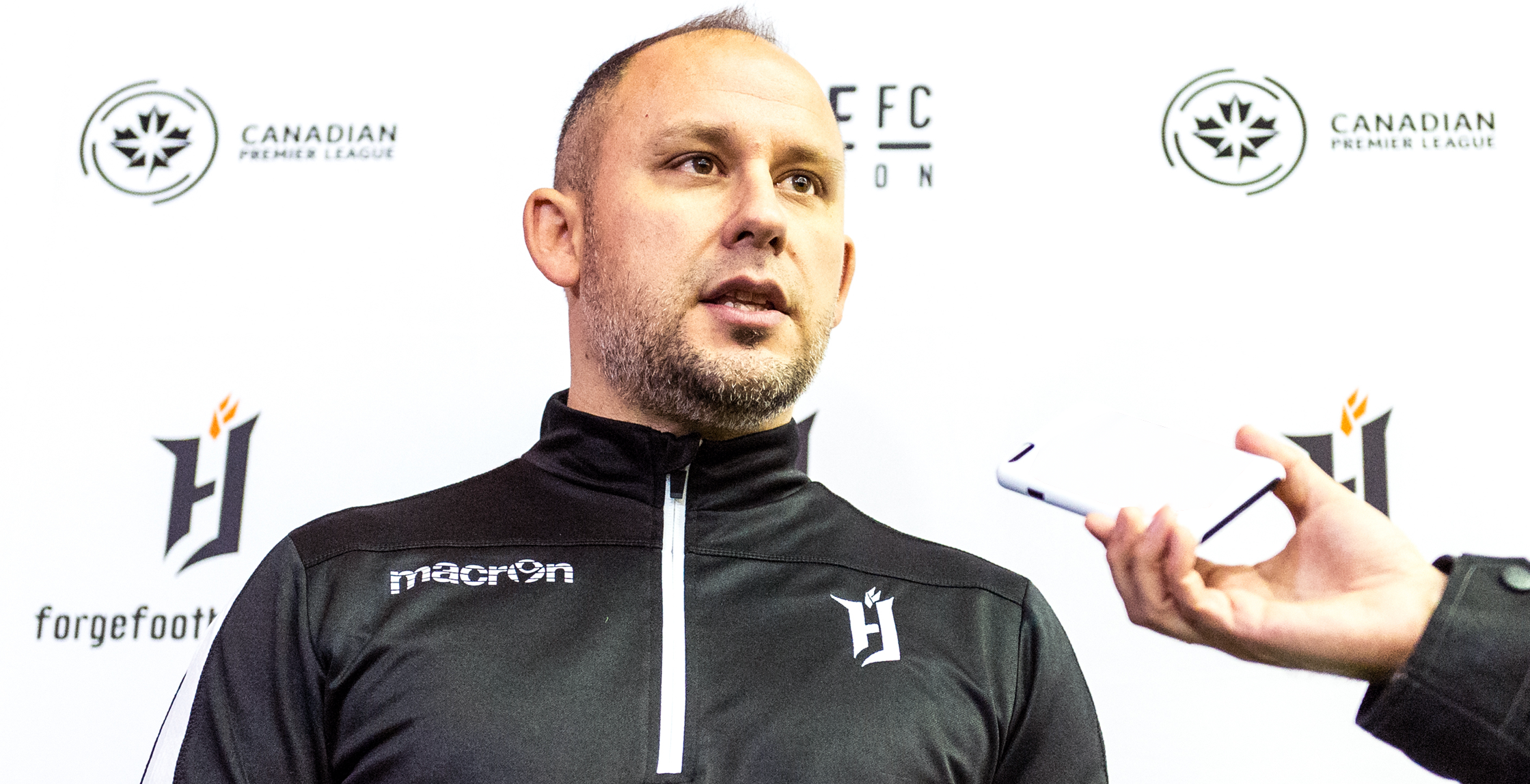 HAMILTON – If you walked by Tim Hortons Field on Thursday, you may have thought the Canadian Premier League’s inaugural match was going on right then and there.

Forge FC head coach Bobby Smyrniotis had automated crowd noise pumped through the speakers at Forge FC training, getting his players used to working and communicating through the noise.

Smyrniotis and many of his players haven’t experienced a crowd as large as what is expected at Tim Hortons Field on Saturday when York9 FC comes to visit in the CPL’s first match (Saturday, 1 p.m., CBC, OneSoccer). However, just the noise of the crowd is hardly a substitute for a crowd like that, especially considering the occasion.

Is Smyrniotis feeling any nerves for Saturday?

“We’re playing soccer,” Smyrniotis told CanPL.ca in response, coupled with a hearty laugh. “I tell the guys, whether its 25,000 in the crowd or nobody in the crowd, it’s 22 guys on the pitch kicking the ball.”

With little to no nerves heading into Saturday’s tilt, Smyrniotis must make sure he and Forge FC are laser-focused.

“From my aspect, I’m very low-key. I’m focused on the team and focused on what we need to do and that’s all we’ve been talking about,” Smyrioptis continued. “But at the same time, it’s a special moment. No one is going to be able to live the inaugural game of a brand new league again in Canada, and we’re all apart of that.”

That crowd is what Bobby Smyrniotis thinks will be his team’s biggest advantage come Saturday.

“We’re playing in a packed stadium on Saturday and if that crowd is a sea of orange, it gives you a very good push in the back as a player,” Smyrniotis said.

“I think it’s the one thing you want when you start playing this game, to play in front of a crowd that’s supporting you for the full way and I think we’re going to take that to our advantage on Saturday.”

“Those are the environments we want to be in, we live for that and we’re are going to feed off of the energy (Tim Hortons Field crowd) can bring,” he said.

Smyrniotis’s week-by-week training method this pre-season has, obviously, came down to its last week. The focus of this final pre-season stretch? York9 FC – the Nine Stripes.

“We started to prepare in regards to out our opponent this past week,” Smyrniotis said. “We have been working on all the components, the free-flowing play, the attacking aspect, and obviously the set pieces is something the very important from an attacking and defensive aspect and the guys have bought into the concepts.”

Forge announced Kyle Bekker as their inaugural captain on Wednesday, also appointing Nanco, Giuliano Frano and Tristan Borges as vice-captains. With Bekker set to lead the side onto the pitch for the first time, Smyriotis insists the pressure of the day is shared equally across all 18 players.

“There is no player we put on top of anybody else, from that aspect, it’s easy to say sometimes and cliche to say but we believe in it and it comes down from the leadership from our players.” Smyrniotis affirmed.

“What we’re looking for is a well-rounded performance, at the end of the day the guys just want to play in front of this crowd and get three points in the table.”

Like many players and coaches set to feature on Saturday, Smyrniotis is expecting family from around the area to be in attendance for the historic match, making it that much more special.

“We are going to be a part of something historical and monumental. It makes it that much better if those people who have supported me from the beginning can join me.”

Another chapter opens up Saturday for Bobby Smyrniotis and his soccer career, while the introduction to the Canadian Premier League finishes and the real story begins.