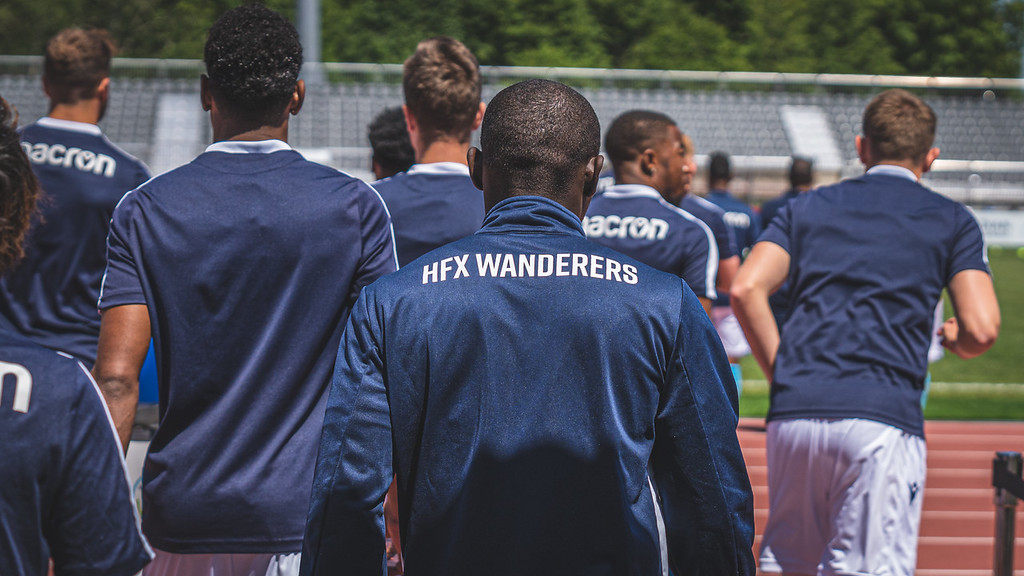 HFX Wanderers players walk out on the pitch at York Lions Stadium. (Photo: Chant.ca).
‘I wish I had an answer’: Injuries mount for HFX as Spring nears close
2019-06-23
by
Marty Thompson, Digital Content Editor (@martythompson_)
News

HALIFAX – Where would HFX Wanderers be in this inaugural Spring campaign without injuries?

It’s a question worth asking after Saturday’s result in York Region; a 0-0 stalemate with York9 FC, putting the side at fourth with eight points from a 2-4-2 record.

“I’m starting to get a little frustrated,” head coach Stephen Hart admitted. “But we’re working with what we have.”

Perea has made all three of his appearances at home, scoring twice and showing quality. Gutierrez, a speedy, creative attacking midfielder, hasn’t played since May 25. Kourouma, the more proven of the three attackers HFX, has been electric on the wing.

It’s those missing attacking pieces that put HFX second-bottom in goals scored in the CPL, averaging 0.75 goals per match through their first eight.

“I can get them close to goal, but I can’t score, I can’t make the final pass,” Hart said. “I think, at times, our game has been about wide penetration.

“Sometimes you can understand the players thinking, ‘Well, how are the goals going to come when we’re dependent on one or two players to get the goals for us?’ You just have to keep plugging away.”

Kourouma, Perea and Gutierrez have featured together only once: HFX’s 2-1 home-opening win over title challengers Forge FC. Yes, a full-strength HFX has beat Forge this season.

Since that early-season win over Forge, Thomasz Skublak has emerged as an effective stand-in for Perea. Netting twice in the Canadian Championship and nearly scoring on Saturday, the 21-year-old has performed well in the Colombian’s absence.

“We are starting to show, at times, that we have a good understanding,” Hart began. “Skublak plays differently than Perea. When we don’t have certain players in the lineup, I think he plays closer to the penalty area than I would like. But, we just don’t have the players that can get him in the ball in those areas, where he’s most effective, all the time.”

Hart offered an update on Perea – who has been out with a hand injury – saying the 32-year-old centre-forward had an x-ray done on his left hand this week.

So, any idea when HFX reset to a full bill of health?

“I wish I had an answer for you,” Hart admitted.