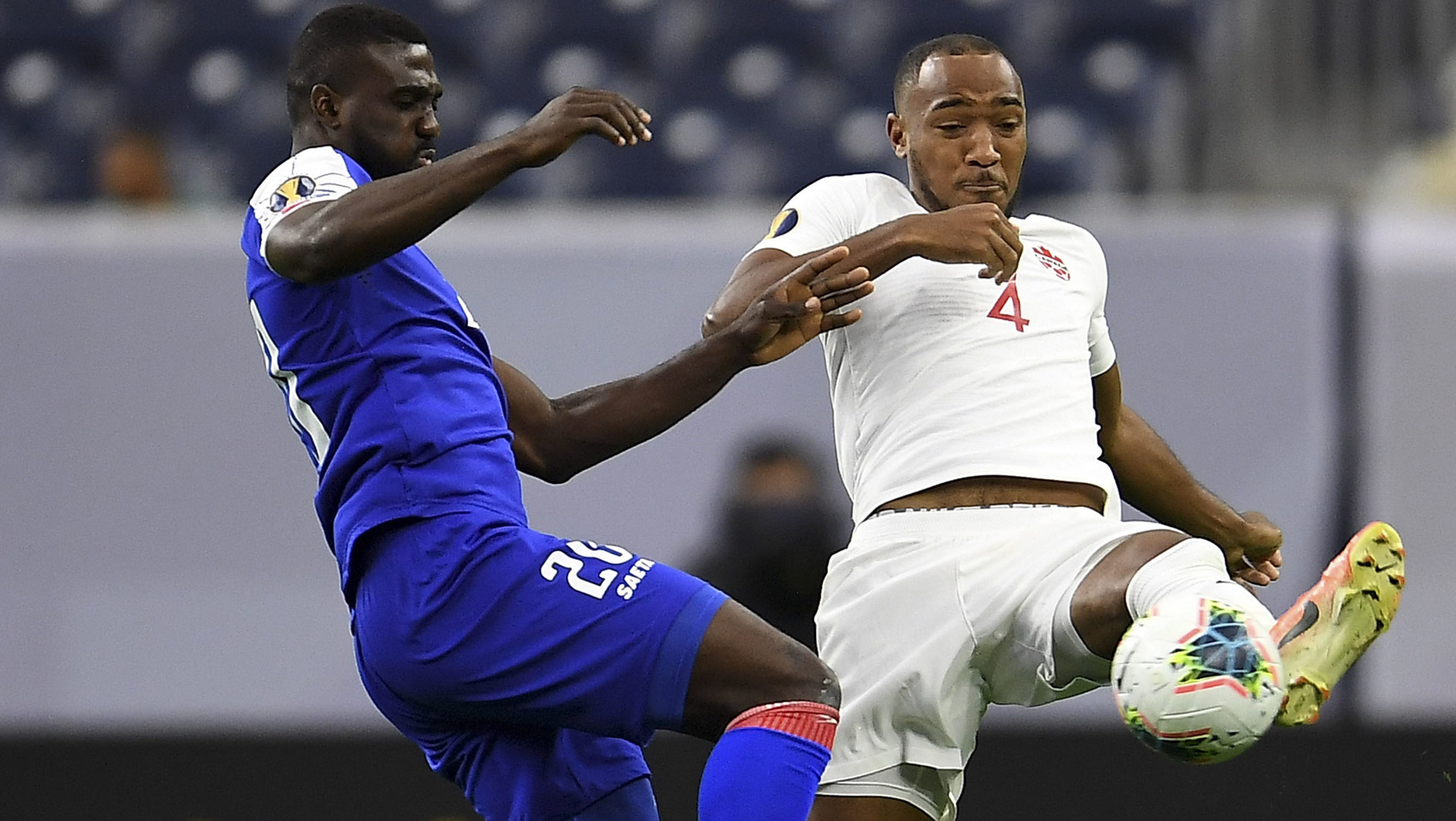 Derek Cornelius fights for the ball against Haiti at the 2019 CONCACAF Gold Cup. (Frantzdy Pierrot/Canada Soccer).
CanMNT eliminated from Gold Cup after 3-2 loss to Haiti
2019-06-29
News

Canada led 2-0 on goals by Jonathan David and Lucas Cavallini before Haiti’s Duckens Nazon, Hervé Bazile and Wilde-Donald Guerrier reversed the scoreline for their fourth consecutive win at the 2019 Concacaf Gold Cup. Canada thought they scored an equaliser just five minutes from full time, but captain Atiba Hutchinson was just offside before he beat the goalkeeper Johny Placide.

“We are all gutted,” said John Herdman, Canada Soccer’s Men’s National Team Head Coach. “We are disappointed in that second-half performance because we gave Haiti everything that they wanted. We’ve got all the talent here, but at the end of the day Haiti were very direct and made it difficult for us. That was tough.

The 2019 Concacaf Gold Cup has provided Canada with an opportunity to face top Concacaf nations for the first time since 2017, all with an eye on preparing for upcoming FIFA World Cup Qualifiers towards Qatar 2022. Canada won two of four matches and reached the Knockout Stage in back-to-back tournaments for the first time since 2009. Looking ahead to the Fall, Canada will next face Cuba and USA in a four-match home-and-away group series from September through November in 2019-20 Concacaf Nations League A, starting with a home match against Cuba on Friday 7 September at BMO Field in Toronto.

In the loss, both David and Cavallini scored their seventh goals of the 2019 calendar season, equaling the national record set by Igor Vrablic back in 1985. David also set a Canada record with six goals scored at a Concacaf Gold Cup and is now tied with Dwayne DeRosario and Ali Gerba for the most goals in the Concacaf Gold Cup. In all, Canada scored 14 goals and conceded six in four matches played across four states at the 2019 Concacaf Gold Cup in Pasadena, California, Denver, Colorado, Charlotte, North Carolina, and Houston, Texas.

“We have a young team and a lot of talent,” said Atiba Hutchinson, Canada captain. “This is a learning experience for everybody. We wanted to go into this tournament and make some statements and prove that we are here to play in Concacaf. We wanted to win this tournament but we were unfortunate. We know the qualities that we have, but there are some things to which we have to get better. We will pick ourselves up and move on from this.”

Canada’s starting XI featured Milan Borjan in goal, Marcus Godinho at right back, Doneil Henry and Derek Cornelius at centre back, Alphonso Davies at left back, and Atiba Hutchinson, Scott Arfield, Jonathan Osorio, Junior Hoilett, Jonathan David and Lucas Cavallini from the midfield up through to the attack. In the second half, coach John Herdman replaced Osorio with Mark-Anthony Kaye (64’) and Cavallini with Ashtone Morgan (80’).

Of note, Atiba Hutchinson made his 84th career appearance for Canada, moving him into a tie for second place on the all-time Canada list (tied with Paul Stalteri at 84, trailing Julian de Guzman with 89).