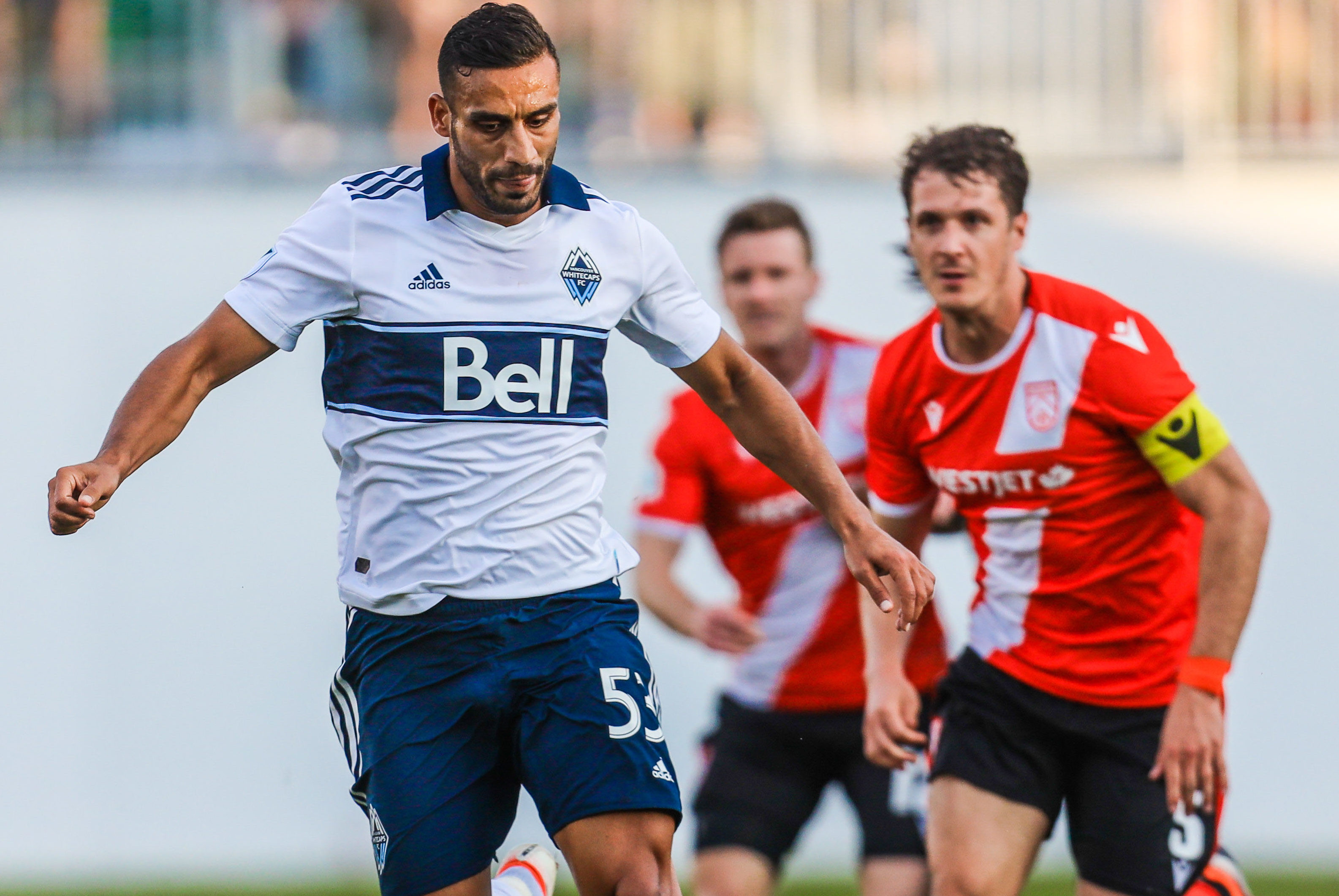 CALGARY – The Whitecaps go home to Vancouver for the second leg of their Canadian Championship third qualifying round tie with Cavalry FC with the score still at 0-0.

But, if not the fingertips of keeper Maxime Crepeau, the Caps would be going back down a goal. Crepeau made a spectacular leaping save on a curling shot from Cavalry sub Oliver Minatel late in the second half.

“I knew he was a lefty, I think I played against him before,” said Crepeau. “I just kept my eyes on it, shifted my feet, made the save.”

After a scrappy first 70 minutes or so, where chances were few and far between, the home side put on a late push in front of a raucous home crowd, and it was the MLS side that was hanging on. There was a series of corner kicks and deep throw-ins from Nico Pasquotti that the Whitecaps defenders had to scramble away — and Cavalry defender Dominick Zator labelled a headed effort that just missed the target.

As promised, the Whitecaps started a strong lineup, with the likes of forward Yordy Reyna and defenders Erik Godoy, Derek Cornelius and Doneil Henry in the starting XI. Maxime Crepeau got the start in goal.

Coach Marc Dos Santos said, as a Montrealer and proud Canadian, he wouldn’t use this country’s national championship as a platform simply to give academy kids some time. He said to not go with strong XI “would not be fair for the fans who were here today, it would not be fair for the opponent and their coaches. We have to take this tournament seriously.”

And they were greeted with a crowd that filled the seats and clapped and sang for 90-minutes plus. You simply couldn’t escape the sound.

“I have to say I was really impressed,” said Dos Santos. “I want to congratulate everyone in Calgary for this. They have to be proud. It is something I believe could grow even more. It was incredible, apart from the grass which was not at the standard of a professional game. All the rest was absolutely fantastic — the crowd, the environment, the setup.”

Dos Santos even joked about where he would want to sit at Spruce Meadows if he were to buy season tickets.
While Dos Santos talked about the choppy pitch, which hosted horse jumping the previous weekend, Crepeau said he scouted both 18-yard boxes before the game.

“I tripped once, going back to my net, because where the bump is. But it’s OK, it’s part of the game. Both teams deal with it.”

Dos Santos credited Cavalry for playing to its strengths.

“Where Cavalry made it very tough for us was every set-play situation, thee corner to the throw-in. The throw-in Pasquotti’s now-famous long throw) is almost better than the cross.”

And MDS had one final thought about his first clash with a CPL side.

“If the CPL is going to be at the standard of where Cavalry put the bar, well it’s heading in a very good direction. I didn’t see the other stadiums, I haven’t had the chance to see the other places. But if the ceiling and the standard is this, it’s very, very good.”