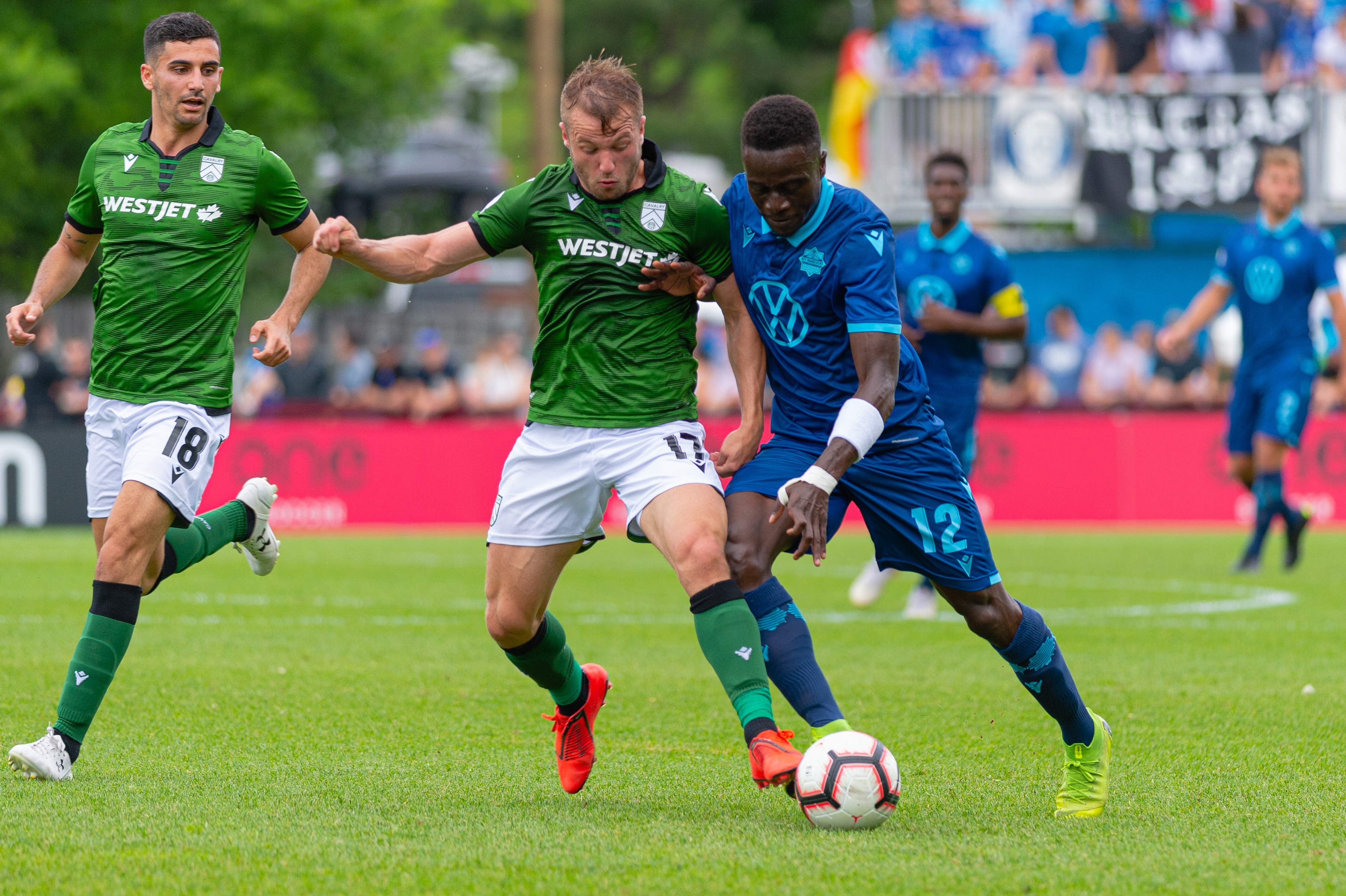 HALIFAX – It was a completely different looking HFX Wanderers FC on the Wanderers Grounds on Saturday afternoon.

After playing on the same pitch three days earlier in the Canadian Championship, the Wanderers rolled out a starting XI featuring five different players in a narrow 1-0 loss to Cavalry.

“I was a little bit worried about so many changes to the squad but they did very, very well,” said Wanderers coach Stephen Hart. “I have nothing but praise for the entire team today.”

Peruvian midfielder Juan Diego Gutierrez started the game after being out injured since late May and defender Chrisnovic N’Sa played a full 90 minutes as he’s slowly come back from injury.

“I thought they were fantastic. Guti gave everything. Alex (De Carolis), he gave everything and he stayed on the pitch. Excellent performance,” Hart said while praising the return efforts of Elton John, N’Sa and Christian Oxner.

“I think it’s the most complete game we’ve played for a while anyway.”

De Carolis made a start at the left fullback position and was busy all afternoon, leading the team with 71 touches.

“I was happy with my performance but at the end of the day, those three points we dropped at home,” said De Carolis while saying the Wanderers are on the right path.

“I thought we were the better team for the most part of the game. We just got unlucky at the end there. I mean Cavalry’s a good team as we all know but I thought we competed really hard.”

Neither team had the luxury of rest after playing mid-week games in the Canadian Championship. Hart’s tactics seemed to work in his favour early on, although the Wanderers were limited to three chances created and one shot in the first 45 minutes.

“Both teams were tired,” said Hart. “But I think they didn’t expect us to play past the press that early. The game was good to see both teams trying to go at it after a tough Wednesday game. It’s difficult.”

On the other side, two substitutions from Cavalry coach Tommy Wheeldon Jr. proved critical as Sergio Camargo created a scoring chance down the wing and Oliver Minatel added the finishing touch with the decisive goal at the 85th minute.

“Sergio is so good in those tight spaces, especially when these guys are tired,” said Wheeldon Jr.

“We knew the backline of HFX is tough to break down, but they’ve put in a lot of minutes.”

Defensive breakdowns and mistakes have been an issue with Hart’s squad all season but the coach had a little easier time on the sideline despite the loss as he said only two errors made his “heart skip a beat.”

“It was late in the game which is when it usually happens. But other than that I thought we were really good at recognizing the danger and relieving the pressure,” Hart said.

“So let’s just say we are learning, we only gave up two today and we got away with it.”