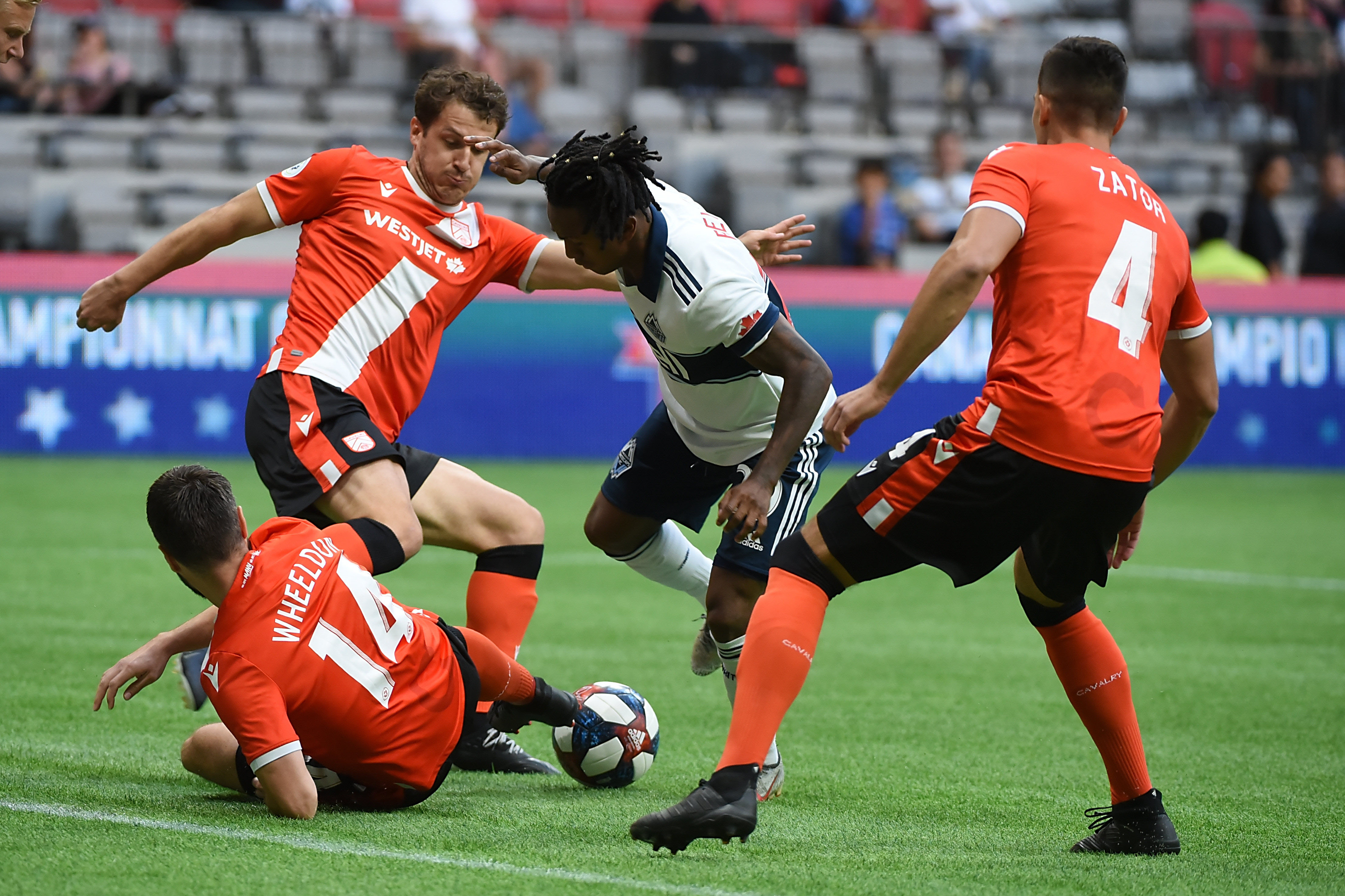 Cavalry defender Dominick Zator had one thing in mind when he stepped onto the field at BC Place on Wednesday night.

“Coming back here, one of the things I wanted was to score against them.”

Them, of course, being the Vancouver Whitecaps, Cavalry’s opponent in the third round of 2019 Canadian Championship action; them, also, being the team that Zator once called his own, now many a year past; them being the MLS “Goliath,” facing the “Davids” of CPL; them, being the team that Cavalry already held to a 0-0 draw at Spruce Meadows, two weeks prior.

Zator wasn’t alone in the sentiment, of course; many of Cavalry’s squad can trace their own footballing paths back to the Whitecaps. But, it was Zator’s powerful header that separated his current team from his former.

It was Zator’s header that saw Cavalry defeat the Vancouver Whitecaps.

“Our guys have got the heart of a lion,” Cavalry head coach Tommy Wheeldon Jr. said after the match. “It’s evident to see, in how we’ve done in the CPL. The CPL is for Canadian players, coaches, officials, administrators, the whole gambit. We’ve got a lot of Canadians playing, and we’ll keep forging ahead to 2026 and creating a bigger platform for Canadian players.”

His words are tinged in giddy excitement. He’s beaming from ear to ear. You can hardly fault the man. His Cavalry team, a side built on the skeleton of his PDL championship-winning Foothills, had just done the impossible – a 2-1 win over the Whitecaps, away from home, to win the series, to clinch a Semi-Final berth against the Montreal Impact, to become the first CPL team to defeat an MLS side.

To make, as Wheeldon Jr. explained, Canadian soccer fans across the country take notice of the CPL.

And, of course, to make history of his own – a Spring winner’s berth notwithstanding.

“I’m just proud of these guys,” Wheeldon Jr. said after his team’s historic victory. “Every single player out there have defied the odds over and over again; whether it was the guys who came with me from the PDL, or started from the CPL, all from the first leg at Spruce Meadows, this has to be up there with the greatest victories we’ve ever had.”

How do you topple a giant?

It’s the question Wheeldon Jr. and his Cavalry team had to figure out before this round of Canadian Championship action.

In the build-up to this third stage, Cavalry faced more familiar competition, taking on and defeating fellow CPL outfits Pacific FC and Forge FC in rounds one and two.

But, as a first-year club, success against an MLS team could easily be defined as simply staying afloat, going toe-to-toe … hell, not making a fool of themselves.

“Look,” began Wheeldon Jr..”We always talked about, ‘Let’s enjoy the occasion, respect our opponents, but let’s not fear it.’ We literally come into here and have nothing to lose. We’re not expected to win as a first-year professional club.”

Still, after a 0-0 opening leg, the mind does wander to more hopeful pastures, and dreams of away goal drama … or, dare you even consider, a win, outright.

So, for Cavalry, the game-plan was simple: Go into Vancouver in the 2nd leg, find an away goal or two, and force a Whitecaps team in miserable form to do something miraculous. As captain Nik Ledgerwood explained, the opening stanza of the match would be critical to their success, if any.

“What we talked about in the locker room was if we could come out strong in the first 10 minutes and weather their storm, that might change the atmosphere of the crowd,” Ledgerwood said.

“This wasn’t the loudest I’ve heard BC Place before; that’s something that we notice as a player. That pushes you, when you see the fans go against the home team at times. We did exceptional in the first 15, 20 minutes to kill the atmosphere.”

Too right they did; Cavalry striker Jordan Brown stunned the home fans with a goal just seven minutes in, assisted by Ledgerwood from midfield. The second goal, in the 73rd, came off a set piece. It was textbook stuff for Wheeldon Jr., from first minute to last. But, especially, from first.

“I’m a big believer in psychology,” Wheeldon Jr. said. “It’s the Mike Tyson line: ‘Everyone’s got a game plan until you’re punched in the face’ – what we wanted to do was lay the first punch, and fortunately that’s what we did.”

Ledgerwood adds: “I honestly believe the biggest difference between both teams tonight was that every player on our team believed we could win the game, and I don’t think that was the case on the Whitecaps. I honestly do.”

The boos that rang around BC Place were pointed not toward Cavalry (well, not always toward Cavalry) but to the Whitecaps, dead last in the Western Conference in MLS, struggling to impress, struggling to score, to win, to appear strong. The more ardent Whitecaps supporters will likely pinpoint their own team’s inability to secure a result of late as the reason for a loss to Cavalry.

But this is the first instance of an MLS outfit losing a two-legged draw to an opponent of a different league.

No excuse changes that.

“The boys have been working so hard,” Zator said on camera after the match, after being jumped by a teammate in jubilant cheer. “To be able to take down a team like the Vancouver Whitecaps is just phenomenal. We’re over the moon.”

With this win, Cavalry will now square off against the Montreal Impact in the Canadian Championship Semi-Final round, anticipating a final against MLS outfit Toronto FC or the Ottawa Fury of USL. The Impact defeated York9 1-0 at Stade Saputo on Wednesday, thus earning a 3-2 aggregate victory after nearly dropping the first leg at York Lions Stadium in an eventual 2-2 draw.

The Fury defeated HFX Wanderers FC over two legs, drawing 2-2 at TD Place on Wednesday for a 5-4 win on aggregate.

If the Whitecaps presented a wounded facade, the Impact will offer quite the opposite.

“We’ll study them the same as we’ve studied all our CPL opponents, and as we did with the Whitecaps – we look at everybody’s strengths, where they’re good; we try to nullify it and try and expose any flaws they have,” Wheeldon Jr. said of his team’s upcoming Impact clashes on August 7 and 14.

“Going into it now? The pressure’s off,” Wheeldon Jr. concluded. “We’re not expected to win. We’re a Cinderella story. So the boys are stepping up a gear. We’ve got a lot of (CPL) football to play between now and then, but (the Impact) is another great experience we’ll look forward to.”