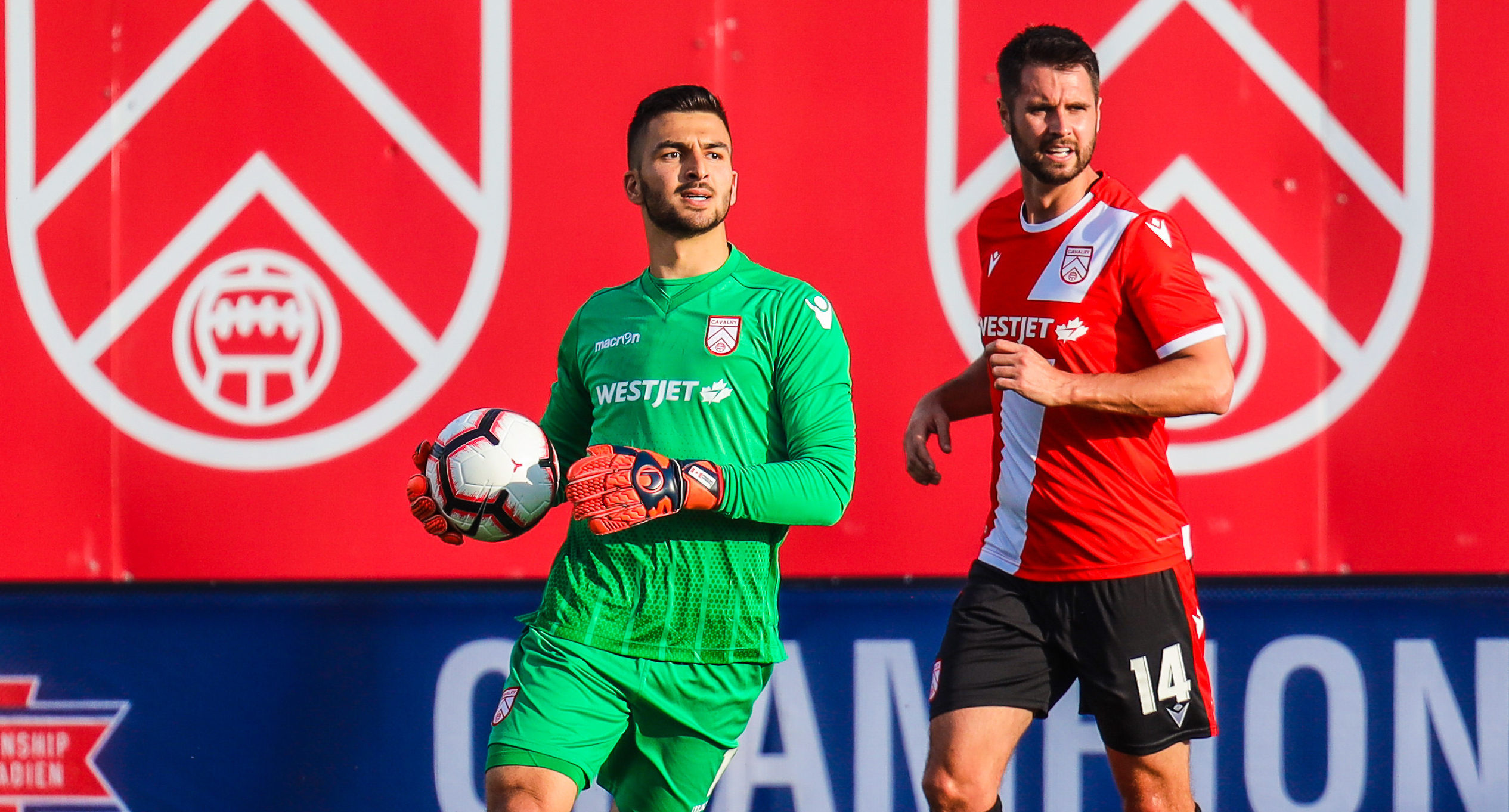 It’s a dream come true, both for the Canadian Premier League and one of its most promising young stars.

Cavalry FC goalkeeper Marco Carducci has been named to the Canadian men’s team roster for a pair of upcoming matches against Cuba, marking the first time a CPL player has earned a call-up to the senior side.

“Marco’s call-up is well deserved. I’m pretty excited to get him in and start working with him. You only have to look at the stats on Marco in the CPL,” Canadian coach John Herdman said during a conference call on Wednesday afternoon.

He later added: “What this speaks to is there’s almost a celebration for those people who have put some hard work into creating a platform for these players to get regular minutes.”

Herdman officially announced his 24-man squad on Wednesday morning for its opening, two-game set against the Cubans in the 2019-20 CONCACAF Nations League, which included Carducci, as well as a host of national team mainstays. Canada hosts Cuba on Sept. 7 at Toronto’s BMO Field. Three days later the teams meet in a neutral venue encounter in the Cayman Islands.

“We at the Canadian Premier League are extremely proud and thrilled for Marco Carducci to be called up to the Canadian men’s national team,” CPL Commissioner David Clanachan said. “This represents another first for our league and validates the reason for Canada having its own professional Premier League.”

Carducci took to social media several hours after the news came out, tweeting:

So excited and proud to get the call up to the #CanMNT squad. It is always an incredible honour to represent Canada ??⚽️

A huge thank you goes out to the entire coaching staff at @CPLCavalryFC and my teammates; wouldn’t be possible without you guys! https://t.co/QC1gbj3nKy

A summons to Canada’s national team is just reward for Carducci, who has shown great character and determination for Cavalry during the inaugural CPL campaign after experiencing setbacks earlier in his pro career.

Carducci, a 22-year-old native of Calgary, toiled in the Vancouver Whitecaps youth system for three years before parting ways with the organization and joining USL side Rio Grande Valley Toros FC in 2017. Carducci returned home in 2018 to play with Tommy Wheeldon Jr. at Calgary Foothills FC, where he saw significant and meaningful minutes, before signing with Cavalry last December.

He has repaid Wheeldon’s faith by establishing himself as one of the top goalkeepers in the CPL, and he is a major reason why Cavalry won the Spring season, and are in contention to win the Fall championship. Carducci currently leads all CPL shot-stoppers with eight clean sheets across both seasons, and he ranks third in saves (43).

Massive Congratulations to @mcarducci96 on getting the call up to the @CanadaSoccerEN Men’s team for the next round of qualifying!!

One of the primary goals of the CPL when it launched earlier this year was to develop and give professional opportunities to young Canadian players, while also widening the player pool available to Herdman as the country prepares to co-host the 2026 FIFA World Cup alongside Mexico and the United States.

Wednesday’s roster announcement is a landmark moment for Carducci and the CPL, the first realization of the league’s mandate of providing talent to the national team.

“What the CPL is certainly creating for our domestic players, and particularly our young players like Marco … are those opportunities to play regularly, and to grow and develop,” Herdman stated.

Carducci’s inclusion in Herdman’s roster also gives hope to the CPL’s crop of young prospects who harbour dreams of one day playing for Canada – that there is a direct pathway that leads them from CPL to the national team.

In fact, Herdman admitted that Carducci, as well as Tristan Borges of Forge FC and York9 FC’s Ryan Telfer, are on his radar and of his coaching staff, including assistant Mauro Biello who has overseen the scouting of CPL players.

“Those names have been part of these selection discussions, and that’s exciting because in the past they’d be sitting on the bench somewhere and not anywhere near the [national team] conversation because they weren’t getting regular minutes and a chance to perform,” Herdman explained.

Carducci has previously represented Canada at the under-23, under-20 and under-17 levels. But he’s had his eye on breaking through to the senior team ranks for some time now, especially with the 2026 World Cup looming.

“I’m confident in the goalkeeper I am, that I’m right there with the best of them for the next generation,” Carducci told CanPL.ca last December.

His call-up means he’ll be unavailable for the Cavalry when they visit provincial rivals FC Edmonton on Sept. 11 for the latest version of Al Classico.

Carducci was called up by the senior team once before, by former coach Michael Findlay, in January 2017 for a training camp. He is one of three uncapped players named to this Canadian roster. Toronto FC fullback Richie Laryea and midfielder Liam Fraser are the others.

Canada is 78th in the current FIFA world rankings, 101 places above Cuba.

Canada breezed through the qualifiers for the Nations League, finishing in second place with a 4-0-0 record, 18 goals scored and just one against. However, the Reds were barely tested, with their victories coming over minnows the U.S. Virgin Islands, Dominica, Saint Kitts and Nevis, and French Guiana.

Herdman’s men found the going much tougher at this summer’s CONCACAF Gold Cup, where they finished second in their group behind Mexico, and then were upset by Haiti in the quarter-finals.

These teams last met at the Gold Cup when Canada thumped Cuba 7-0 in Charlotte, North Carolina. Both Jonathan David and Lucas Cavallini netted hat tricks for the Reds.