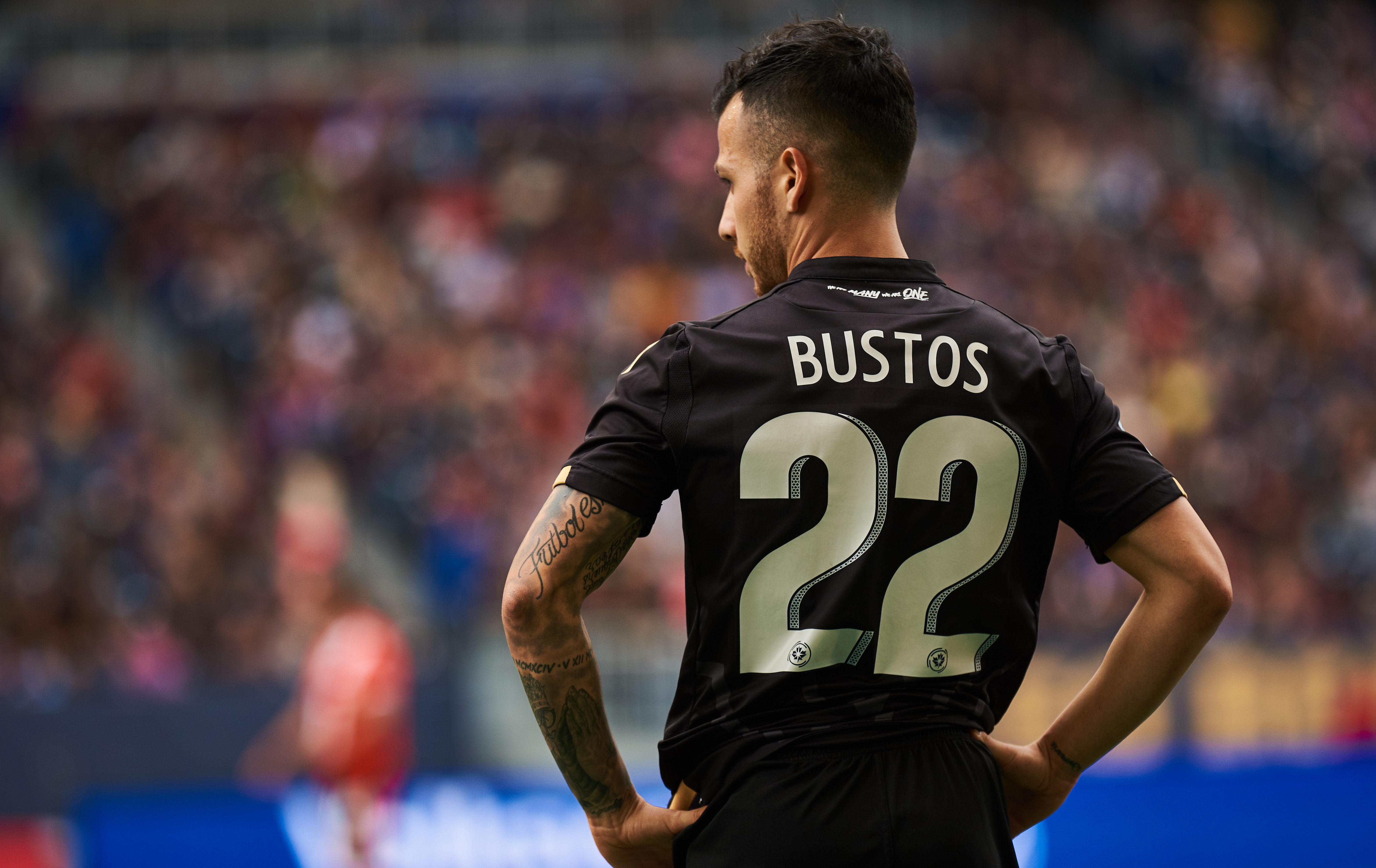 Valour's Marco Bustos watches on as his team is defeated 8-0 by Cavalry at IG Field. (Photo: www.davidlipnowski.com).
‘Like a slap in the face’: Cavalry thrashes Valour to set record win
2019-09-02
by
Ryan Brandt, CanPL.ca contributor
News

WINNIPEG – Approaching Monday afternoon’s match, Valour FC head coach Rob Gale said his side couldn’t gift anything to Cavalry FC. They don’t need the help, sitting first in the fall season of the Canadian Premier League after finishing first in the spring. If they are given an opening, they take full advantage.

Alas, that is exactly what Valour did. Gifting the visitors a three goal first half, wrapping paper, bows, Hallmark card, all of it. It would eventually drag on to a 8-0 drubbing for the Calgary side. A much needed victory to start September as they take a three point lead atop the Fall standings. Granted, Forge FC have three matches in hand.

“I think we got our tactics right, boys had a bit of freshness about them again,” Cavalry FC head coach Tommy Wheeldon Jr. said. “We’re our best version of ourselves when we are ruthless and Valour got the brunt of it.”

They sure did. Down 3-0 at half, some tactical changes didn’t bring change for the home side. It ended up going worse. Valour conceded five more times in the second half.

“They need to have a good look at themselves individually,” Valour FC head coach Rob Gale said post-match. “You don’t lose by that margin in amateur sports, let alone professional, we can only apologize to the fans.”

What began as an even match turned on its head when Valour midfielder Jose Galan knocked over Cavalry’s Oliver Minatel in the box, setting up a Nik Ledgerwood penalty goal. Minatel would later add two of his own, as would Julian Buescher. Nico Pasquotti and Jordan Brown also scored to go with a Valour own goal from a Jose Escalante cross.

“We knew what we wanted to do when we came here on edge and that was our theme, we needed to get back to being us,” Pasquotti said on the OneSoccer post-match show. “I think we started to find gaps and exploit it, put the pressure up and put the ball in the back of the net.”

An 8-0 victory is a statement in itself, and with the spring champs sitting in first for the fall, Cavalry wants to make it clear that they are going for the double.

“That’s a big thing this fall season, we know we are already one step into the finals so we can work on things, keep building, getting better and rise up to that peak.”

Cavalry also pulled off the record setting victory in a period of squad rotation, adding Nik Ledgerwood back into the starting lineup may be the most key move of them all. The veteran midfielder picked up man of the match honours to go with his goal.

“The captain led, took the penalty, took the lead, I thought he was brilliant today, that’s a captain’s performance,” Wheeldon Jr. said of Ledgerwood’s play. “Everyone else follows, and we didn’t play (Dominique) Malonga, Sergio (Camargo) is back at home, Elijah Adekugbe is back at home so our depth is starting to come through and at the right time.”

As for Valour, there’s not much that can be quickly analyzed from such a lopsided result, and unfortunately it’s a scoreline that will be left to stew as the club does not play again until Sept. 12 at home to Forge FC.

“It’s kind of like a slap in the face,” said Valour FC captain Louis Beland-Goyette. “I don’t think it can get worse than that so (we) can just learn from it and try to move forward.”

Not nearly as shocking as the final score, but certainly a surprise that the Valour side that gave up eight goals to Cavalry featured the exact same starting eleven from a 2-0 victory of HFX Wanderers less than a week ago.

“We’ll have a look and see if we got it wrong with the personnel but we trusted our players to be able to put together back to back performances,” Valour FC head coach Rob Gale said.

One thing that emerges is a clear direction both sides have entering a bit of a layoff. Cavalry may feel that the sky’s the limit after potting eight goals and getting over a week between matches with a visit with FC Edmonton set for Sept. 11.

“(The break) is even better because we get some time to work on other things,” Cavs head coach Tommy Wheeldon Jr. said.

For Valour, at least there is nowhere to go but up. However, they await another tough test at home when fall title contenders Forge FC come to Winnipeg on Sept. 12.

“I think you just have to write it off so we’ll challenge the players to respond in the right way,” Valour FC head coach Rob Gale said. “It’s going to be a ton of video work and a ton of review with each and every player… (today) wasn’t good enough.”