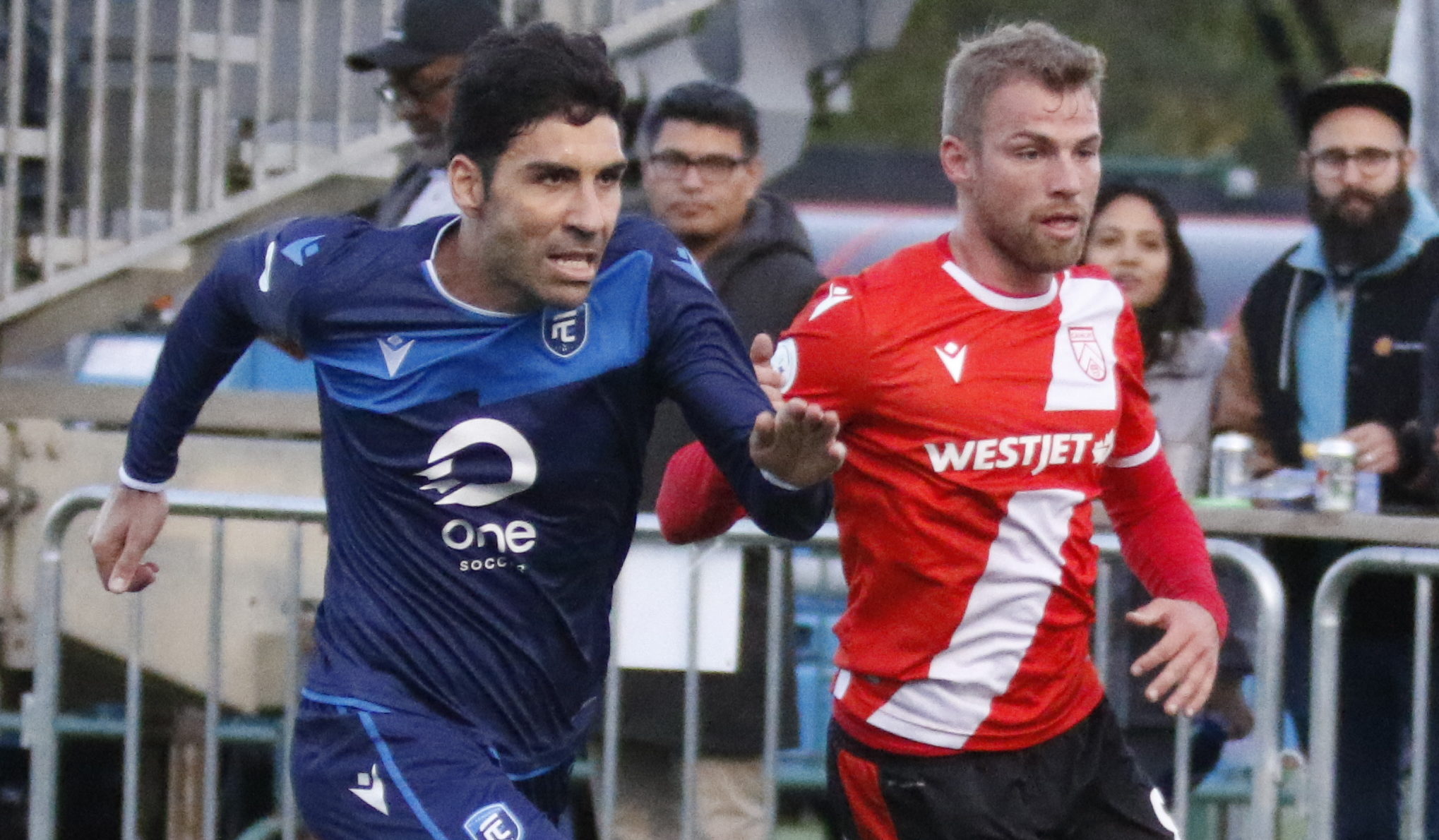 EDMONTON – At this point of the season, there’s little argument that Cavalry FC and Forge FC are the two top teams in the league.

Following Cavalry’s latest win over FC Edmonton in league play, coupled with Pacific FC dropping points to York9 later in the evening, the top of the table has gotten a little less cozy as we strafe over the mid-Fall hump and into the final stretch of the CPL’s inaugural campaign.

So, unless something very crazy happens, Cavalry and Forge will most likely oppose one another in the Canadian Premier League’s two-legged championship come end of October, early November.

Now, that’s not to rule anyone else out of contention – the season is far from finished, and anything is possible in football.

But if there’s anything that makes FC Edmonton’s season so frustrating for the team’s supporters, it’s that the opportunities to challenge the top presented themselves so clearly on a platter.

That, and the fact that the Eddies have enjoyed and endured night-and-day success rates against the league’s top two outfits.

Against Forge, FCE has acquitted itself nicely, with a 2-1-1 record. In the most recent three meetings between the clubs, Forge has only scored twice. But, against Cavalry, the Eddies are a miserable 0-3-1 and, well, there is no nice way to put it — no euphemism to soften the blow – the Eddies haven’t scored in 360 minutes of football against their Al Classico rivals.

The thing is, through the four Battle of Alberta matches, the Eddies have shown some real bright spots.

In the second half of their first encounter, the Eddies went more direct — and Marcus Velado-Tsegaye forced keeper Marco Carducci to make two excellent saves. In their second meeting, the Eddies dominated the first half, but couldn’t make it count and went on to lose 3-0. In the third meeting, a 0-0 draw, FCE’s Ajay Khabra smashed a ball on the post. In Wednesday’s 1-0 loss, the Eddies were able to create a couple of excellent chances in the second half, and were arguably even better as an attacking force after they went down to 10 men.

Coach Jeff Paulus said that he knows the recipe to beat Cavalry — and that’s to run the ball right down the throat of coach Tommy Wheeldon Jr.’s press.

“We think we have the formula to actually go at this team,” Paulus said after scoreless effort number four.

He said the other way to attack the Cavs is to dribble right at them, to take the ball right at the press.

“Not enough teams do that,” Paulus said.

From the other side, Wheeldon Jr. has an idea why FC Edmonton has found success against Forge.

“I think what Edmonton do well against Forge is they bully them, and make it physically imposing,” Wheeldon Jr. offered. “Obviously, Forge don’t like that.”

It’s a style that doesn’t quite translate as well against Cavalry, though.

Of course, all of this works out quite well for the Calgarian outfit, who could point to this disparity as a key factor in their 2019 season, should the Cavs claim both the Spring and Fall crown.

The difference between all three teams could come down to the points Cavalry has gained vs. FC Edmonton, in contrast to the points Forge has dropped against the Eddies.

“It’s a great triangular series,” Wheeldon Jr. said. “We’ve had a lot of success against Edmonton, but they’ve all been close games, as have our games against Forge.”

While the Wildrose Cup has been claimed, Cavalry plays Edmonton one last time this season, rounding off the 2019 campaign on Oct. 19 at Spruce Meadows. Until then, however, both Albertan sides will have to take on visiting Forge, where points will be at a premium.

Edmonton hosts Forge at Clarke Field on Oct. 2, while Cavalry has a double date against the Hamiltonian outfit on Oct. 9 at Spruce Meadows, and Oct. 16 at Tim Hortons Field.

“Forge still have to come through Alberta before the run-in to the finals, so there’s a lot of football to be played,” Wheeldon Jr. said, of the challenge. “I’m sure it’ll make for a lot of good stories.”