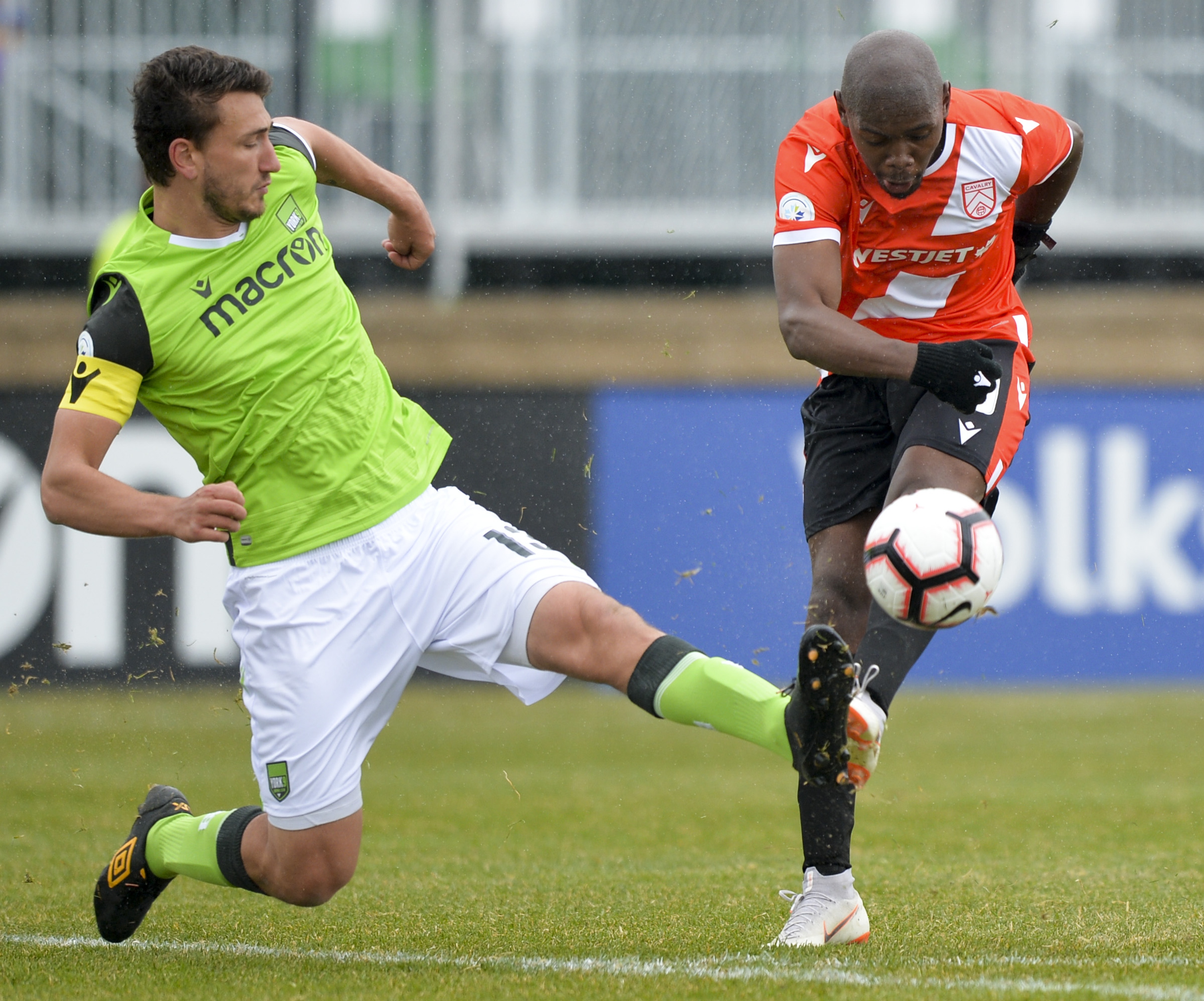 YORK REGION – No one has played more in this inaugural Canadian Premier League season than Luca Gasparotto.

The 24-year-old centre back has featured in every single minute of York9 FC’s 21 CPL matches thus far, as well as all six of their Canadian Championship outings.

In a league established to give young, Canadian players such as Gasparotto the opportunity to play consistently, 1890 minutes, thus far, is the mark of perfection.

He is, unquestionably, this season’s ultimate “Ironman.”

Y9 coach Jimmy Brennan knew back when Gasparotto was added to the squad in February what he was getting and the defender has not disappointed.

“Luca has been great for us,” Brennan stated. “He’s been a great leader. He loves to defend, leads by example, he’s comfortable on the ball, building out of the back, he knows when to slow the play down, how to slow the counter when they’re coming at us.

Born in North York, and raised in Ajax, Gasparotto is a hometown kid who is making good, having learned the game at local clubs before taking his talents across the pond to Europe, and then coming back home to join the CPL.

“I played for Ajax SC since I was about five or six, all the way until I left at 16,” Gasparotto explained. “My dad was the coach there for my whole career. (He) played semi-professional and then got into the coaching.

“So it was a bit tougher on me, as you would expect, being the coach’s son.”

His father, Dario Gasparotto, who was also a centre back in his day, still coaches in the FC Durham Academy.

“He taught me a lot,” Gasparotto said. “And we had back-to-back national championships.”

His Ajax Strikers side were national champions in 2010 and 2011 when he was 15- and 16-years-old – post-match interviews from father and son following their victory in 2010 are available online from OSA TV’s Touchline.

“I learned a lot from Ajax,” the defender said. “And took it overseas with me. But it’s nice to be back.”

From one famous name to another

Just how does a teenager from Southern Ontario end up in the academy of Scottish giants Rangers FC? It began with an opportunity at Watford FC, who were competing in the Football League Championship at the time.

“I went to England for a couple trials and then spent a week up in Scotland at Rangers. My agent got me it,” Gasparotto recalled. “(I) trained with them in pre-season, played a couple of friendlies and after that they were interested in me.

“So I came back (to Canada), packed up my bags and two weeks later I moved everything over.”

It was a big step forward for the 16-year-old.

“At 16, that’s a bit of a shock… I grew up really quick, learned a lot over there: football, on the pitch, off the pitch and being in professional environment. I really enjoyed my time over there,” Gasparotto stated.

The game is also vastly different in Scotland, as Gasparotto quickly learned.

“Seeing the passion, the level of intensity, even in training,” Gasparotto said. “It’s their job and they go all out, there’s no taking it easy, you’re always fighting for that place on the team. Very professional the way they go about it.

“I learned a lot in that aspect.”

That is something Brennan has been looking to instil in his fledgling club, but it was not just the professionalism that prepared Gasparotto for this next part of his career.

“Obviously playing at Ibrox was a big shock for me,” recalled Gasparotto about stepping onto the pitch at Rangers’ home stadium. “I remember my debut at 17 – 58 000 (fans)… I couldn’t speak for the first ten minutes of the game.

“That was pretty cool, something that I’ll take with me forever.”

That experience at Rangers has helped him navigate this season with York9 as one of the club’s more experienced players.

“In games like (the ones) against Montreal (Impact in the Voyageurs Cup), against Hamilton at the start of the season, (the inaugural CPL match), some of (my teammates), most of these guys, haven’t played in front of that type of atmosphere, that type of crowd,” Gasparotto offered.

“So I can help, in terms of preparation, what to expect, how to go about it. I take a lot of that with me going forward.”

Informed that his interviewer had taken in an Edinburgh derby between Hearts of Midlothian FC and Hibernian FC, Gasparotto referenced the intense rivalry in Glasgow between Rangers and Celtic FC: “Wait until you see an Old Firm, it’s something else.

“One of the best atmospheres I’ve ever experienced. Even at youth level, the Old Firms are pretty crazy.”

Perhaps the biggest lesson he took from his time in Scotland was one conveyed by the crowds themselves.

“It’s their life – it’s life or death – the soccer team,” he explained. “Their whole childhood, their family; it’s in their blood. They have a routine: wake up, eat breakfast, go to the pub, watch the game, go back to the pub – win or lose.

“I learned a lot about that, what it means to them, the passion these fans have. Hopefully it’s something we can build on over here going forward.”

Not just anyone earns a place at such a prestigious academy.

“It shows he’s got talent,” Brennan stated. “You don’t go to Rangers Football Club if you’re not a talented defender. He’s done well over in Scotland, has got a good name for himself.

“And now it’s about Luca building a name for himself here in this league, which I think he’s doing.”

A series of loan spells away from Rangers would eventually lead to a move to Falkirk FC and then another loan, followed by a permanent deal at Greenock Morton FC – stories for another day.

But then came the opportunity to return home and help establish this new league in his home country.

Gasparotto’s aim in the CPL?

Having represented Canada at various youth levels internationally, he was called up to the senior squad in 2015 for a World Cup Qualifier. With the defensive ranks of the national team currently thin, expect Gasparotto to be one of those John Herdman and Mauro Biello are keeping a close eye on.

“I’d like to get back into that mix, it’s been a few years since I’ve been involved,” the defender said. “I’m just working on playing well every week, making a name for myself in this league with solid performances.

“One of my goals is to play as much as possible, which I’ve done this season – I don’t think I’ve missed a minute, so that’s a positive. Hopefully if I can continue to play well then I can get back into the national team.”

One of my goals is to play as much as possible, which I’ve done this season – I don’t think I’ve missed a minute, so that’s a positive. Hopefully if I can continue to play well then I can get back into the national team.