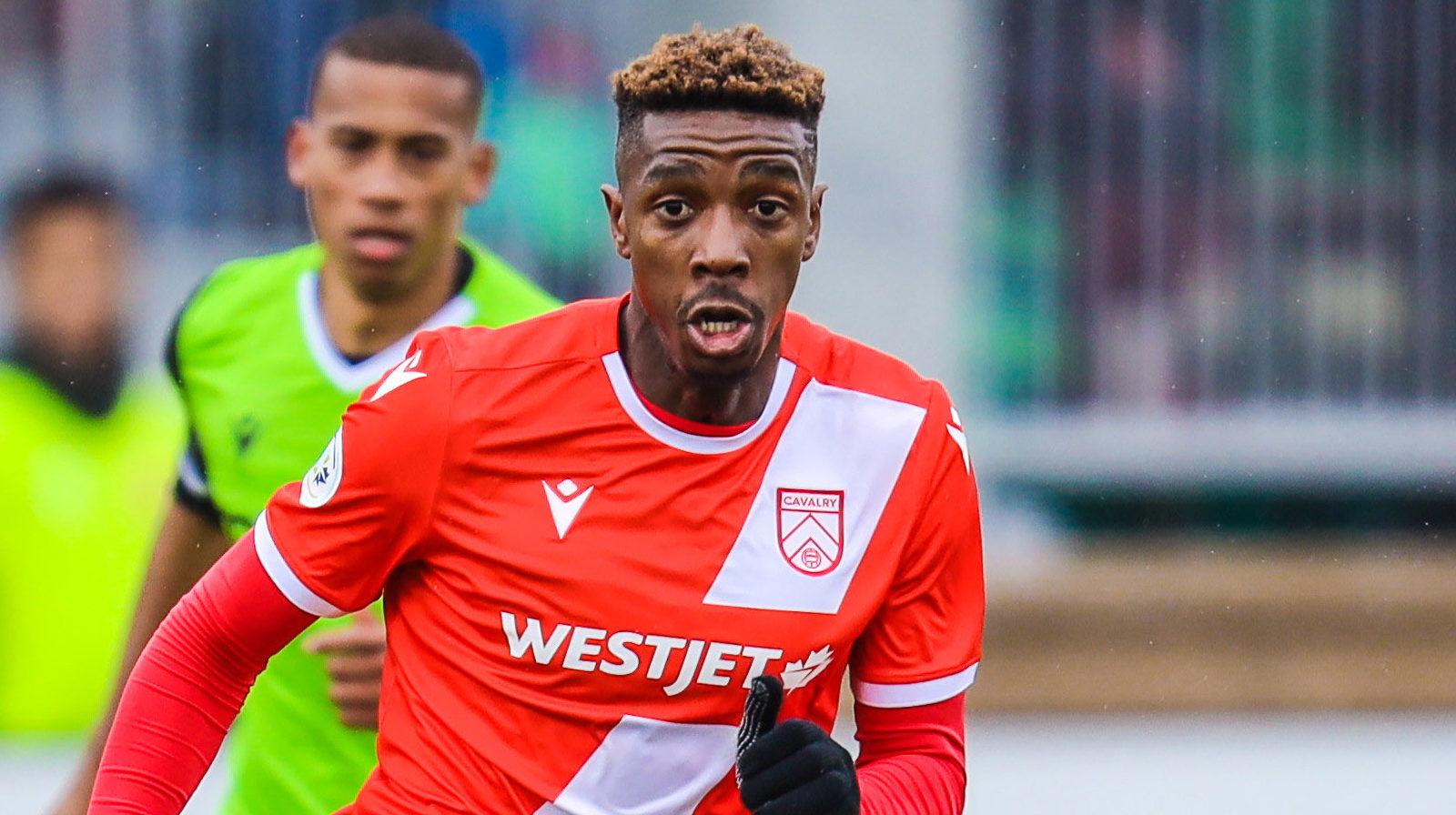 Cavalry FC attacker Dominique Malonga controls the ball against York9 FC. (Sergei Belski-USA TODAY Sports for CPL).
SANDOR: How important is it to have balanced scoring in the CPL?
2019-09-16
by
Steven Sandor, CanPL.ca contributor
News

No matter the team sport, balance is important. If you have one star player, but the supporting cast doesn’t carry its weight, things tend to fall apart.

Sure, we mythologize players who “carry their teams on their shoulders,” but, in truth, a team that has balance will more often than not be more successful than one that is top-heavy.

In baseball, if you have only one great hitter, pitchers don’t have to challenge him. But, if he has hitters ahead of him who can get on base and ones behind that you need to respect, that star will see his fair of fastballs across the plate.

The Edmonton Oilers had two 100-point players on their top line last season, but had little production from three other lines. So, the exploits of Connor McDavid and Leon Draisaitl were wasted on a team that didn’t make the playoffs.

In basketball, if you have only one focal point in the offence, opposing coaches can double-team that player to death, daring someone else on your team to beat them.

In soccer, balance is important, too. You want your strikers to be prolific enough that they occupy defenders and create space for your midfielders and wingers. But you want those support players to be successful enough so that the opposition defenders can’t just simply focus their attention on shutting down one or two players.

So, which Canadian Premier League teams have the most balance? And does balance translate into success in the standings?

Before I get into the numbers, there is an understanding that some teams aren’t designed to be as balanced as others. For example, FC Edmonton, who play with the big targets of Tomi Ameobi and Easton Ongaro up front, are more inclined to funnel the ball forward than Forge FC, who like to use three playmakers right behind a single striker. Cavalry FC feasts on turnovers, using its unrelenting high press to force mistakes from the opposition — so the Spring season champs are, by design, more opportunistic than other CPL sides.

When it comes to top-heavy teams, FC Edmonton is the first team that comes to mind. The Eddies have six goals from Ongaro and six more from Oumar Diouck. Together, they account for up to 60 per cent of the team’s offence. Also, the Eddies have played 12 games this fall season, and have only one goal from a player outside of strikers Ongaro, Diouck and Ameobi — a Ramon Soria free kick. If the forwards aren’t clicking, the Eddies aren’t getting enough towards goal from the supporting cast.

Compare those numbers to the top two teams in the league, Cavalry and Forge.

Forge FC has scored 37 times this year. Where are the goals coming from? It’s easy to highlight Tristan Borges and his 10 goals. But, 11 players, count ‘em, 11, have found the net for Forge in the fall season alone. The truth is, Forge plays in a way that’s less predictable than anyone else in the league, and coach Bobby Smyrniotis has a variety of weapons at his disposal. So, we’ve seen Anthony Novak, when healthy, become a striker who takes the heat off Borges and his midfield partner, Kyle Bekker. We’ve seen moments of magic from Kadell Thomas. Chris Nanco can use his speed to create chances.

Cavalry has 35 goals this season. Eight different players scored in 10 spring games, and seven have scored in the fall. Oliver Minatel, who didn’t play much in the spring, has five goals in the fall. Dominique Malonga leads the team with six goals, four off the league leaders. But, Cavalry have five players in the league’s top-20 scoring list. Five. No one else has more than three.

If you want the “stat that proves having a great scorer having a fantastic individual season doesn’t mean you’ll be successful,” look no further than Pacific FC. Terran Campbell has lit up the CPL, tied for the league goal-scoring lead with 10. But in the games in which he’s scored, Pacific has only won three of them. Yes, you can argue that without Campbell, those are nine points Pacific would not have secured — but the truth is that the majority of his goals have come in losses and draws.

York9 FC is almost as top-heavy as FCE. The Nine Stripes have scored 27 times this season, but 17 of them have come from the trio of Simon Adjei, Ryan Telfer and Rodrigo Gattas. Like the Eddies, Y9 aren’t getting enough from the supporting cast.

Valour FC has a decent spread, with 15 of 26 goals coming from players outside of the league’s top 20 scorers. But Valour is the most difficult to assess in this exercise, because four of Michael Petrasso’s team-leading six goals have come from the penalty spot. But it is interesting that the team’s top two scorers, Petrasso and Marco Bustos (five each), aren’t traditional strikers. Teenage forward Tyler Attardo scored twice in this weekend’s win over York9, and his emergence will likely shift Valour’s over-reliance on its playmakers to actually score the goals.

Finally, HFX Wanderers. With just 15 goals in 21 games, really, this is a team that needs more production out of, well, everyone. Akeem Garcia has one third of that output. Only four players have found the net in the fall season. So, sadly for HFX, outside of the two goals scored in Hamilton on Sunday, the team has had balance — but it’s the wrong kind.