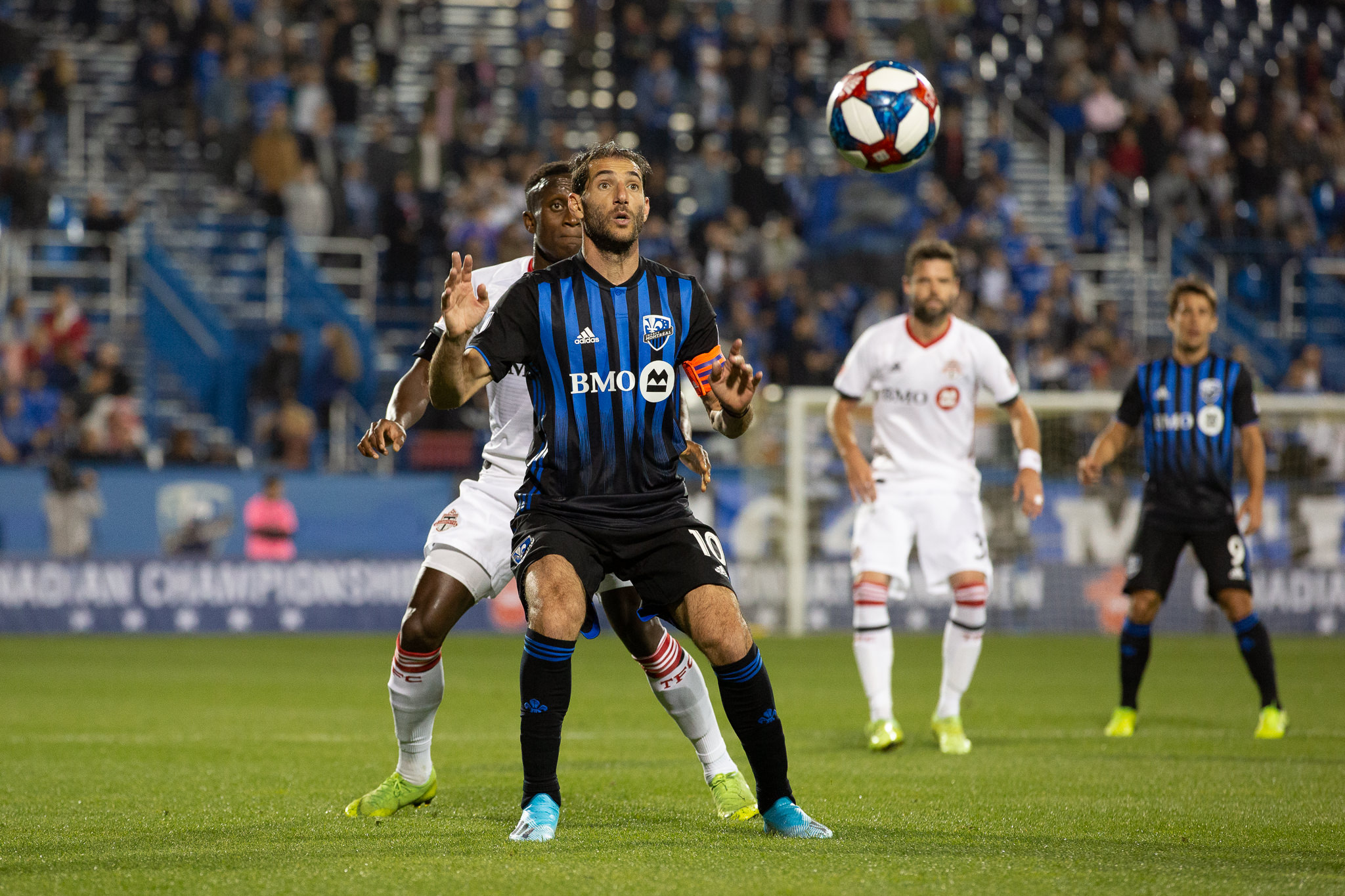 Toronto FC’s vice-like grip on the Canadian Championship has been slightly loosened by their fierce Canadian Classique rivals.

TFC dropped a 1-0 decision to the Montreal Impact on Wednesday at Stade Saputo, setting themselves up for a must-win situation next week if they are to claim the Canadian title for a fourth consecutive year.

Ignacio Piatti scored the game’s one goal for Montreal, who holds the advantage in this two-legged final, needing only a draw in next Wednesday’s return match at Toronto’s BMO Field in order to be crowned Canadian champions.

Impact coach Wilmer Cabrera was pleased with how his side shook off a pair of losses in their last two MLS matches – results that put a serious dent in their chances of qualifying for the playoffs – and responded with a strong effort against Toronto.

“It was really important for us to take this heavy load that we’re carrying off our shoulders after two losses at home. Nobody likes that. We didn’t like it, and we were feeling really bad about it, so today, it was a very good opportunity, in the first leg of the final, to try and go out and shake that off our shoulders. The players did that, they did it well, and it’s a final, so it’s a tough rival,” Cabrera said.

He added later: “We were very organized, we were very solid. We didn’t make too many silly mistakes.”

Even though Toronto coach Greg Vanney was disappointed his team couldn’t bag a valuable road goal, he still likes his team’s chances of coming out on top next Wednesday at home.

“We wanted to get a goal and we didn’t, but I think 1-0 is something that’s doable. It’s not like it got away from us tonight. At 1-0, we go home and now we know the result (we need to) turn it around,” Vanney said in the post-match press conference.

With Montreal and Toronto in MLS action on the road on Saturday and involved in a tight playoff race, both coaches heavily rotated their squads, with Vanney making nine line-up changes from last weekend’s home win over the Colorado Rapids. Regular starters Jozy Altidore and Alejandro Pozuelo were on the bench before coming on to start the second half after a dull attacking display from the Reds through the opening 45 minutes.

Montreal carved out early scoring chances with Saphir Taïder pulling the creative strings, but Ignacio Piatti and Lassi Lappalainen couldn’t finish them off.

Piatti would not be denied, though, as the Argentine accepted another feed from Taïder, and took full advantage of TFC defenders not shutting him down by hitting a sublime half-volley from 25 yards out that blew by goalkeeper Alex Bono and nestled into the upper corner. The goal was Piatti’s 11th in 13 appearances vs. TFC. He also moved into a tie with Sebastian Giovinco as the tournament’s all-time top scorer with six goals.

Toronto grew into the game as the first half wore on. Former Impact defender Laurent Ciman’s knuckling free kick from distance forced a save from Clement Diop, and moments later the Montreal goalkeeper came up begin again when he tipped Jacob Shaffelburg’s dipping effort on the half-volley over the crossbar.

Piatti tested Bono early in the second half, stinging the goalkeeper’s palms with a venomous shot from just outside the box. Lappalainen should have made it 2-0 when he was played in on goal after latching onto a pass over the top of Toronto’s defence from Taïder, but the Finnish international pushed his shot wide of the post.

Diop denied Altidore from in close midway through the second half with TFC in the ascendency. That was Toronto’s last meaningful scoring opportunity, as Montreal effectively managed the game from that point on to see out the victory. Taïder picked up his second yellow card of the competition late in the second half, which means he’ll be suspended for the second leg in Toronto.

The winner of the Canadian Championship will not only hoist the Voyageurs Cup, but also clinch a berth in the 2020 CONCACAF Champions League.

The Impact booked their spot in the Canadian final for the first time since 2017 by defeating Calvary FC in the semifinals, while TFC bested the Ottawa Fury to advance.

NOTES: TFC has won the Canadian Championship a record seven times. The Impact have been crowned Canadian champions on three occasions, the last time in 2014… Toronto leads the all-time series against Montreal in this competition, with 10 wins and five draws in 19 matches…This year marks the third time since 2014 that TFC and the Impact have met in the tournament final… Canadian tennis star and U.S. Open champion Bianca Andreescu was in attendance at Stade Saputo for Wednesday’s match.