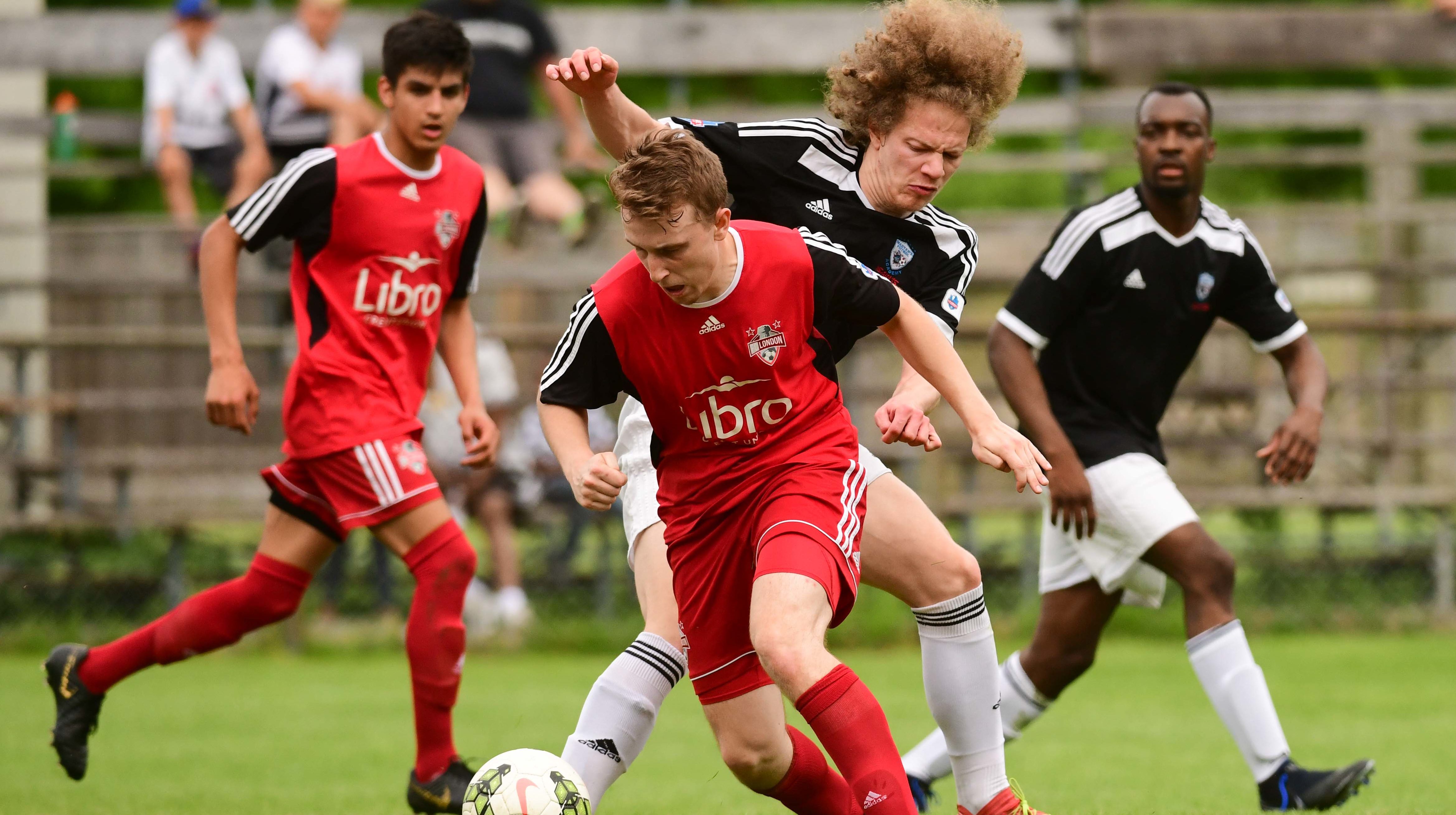 Two newcomers will make their debut in the 2019 League1 Ontario Men’s Championship Finals on Friday night, demonstrating the depth of talent that is brewing in the league following an exciting year of 40+ alumni signings into the Canadian Premier League (CPL).

FC London and Masters FA from Scarborough will take centre-stage in this year’s Final, setting up a battle of two teams that had very different stories in the 2019 regular season. At the end? A first League1 Ontario championship and a berth in the 2020 Canadian Championship.

The 2018 regular season champions, London started out the 2019 season in mediocre form, dropping points for much of the first half before pulling themselves together and salvaging the campaign with a successful run of impressive results. London ultimately grabbed the seventh (and second last) seed in the 2019 Championship Playoffs.

The southwestern Ontario side then set about confounding the odds-makers with a series of strong performances over the two-leg format in both Quarter- and Semi-Final stages to topple second and third-seeded teams: Vaughan SC and Alliance United.

Perhaps there’s something in the water in London? Head coach Mike Marcoccia will count Friday’s Men’s Final as his second this season after already piloting the FC London women’s side to the 2019 League1 Women’s Title just three weeks ago.

“Not getting the results was frustrating obviously, but we continued to stick with what we believed in,” Marcoccia said before the final. “To go ten games unbeaten in a league as strong as this has been something really special for us.”

Where London men had a patchy start on the 2019 season, the story of Masters FA, on the other hand, has been one of dominance from start to finish.

Under the leadership of head coach, Rick Titus, and Masters’ owner, Junior Groves, The Saints, as they are known, gelled early in the campaign and ultimately only wobbled on three occasions – dropping losses to Sigma, Darby and Vaughan.

The 2019 edition of Masters combines some of the league’s most exciting attacking talents with a well-marshalled defensive structure to devastating effect. Making short work of Sigma in Quarter-Finals, Masters then found a way through a tense two-leg Semi-Final encounter with the 2019 regular season champs, Oakville Blue Devils.

“We have built a real contender for the title,” Groves said “Although we will not be looking past FC London. We will take this one game at a time.”

“Our focus now is on gelling these players with senior players to compete and win leagues like League1 and look forward to CPL opportunities. Since doing this, we have been able to move players to Europe and to CPL as well, in the case of York9’s Cyrus Rollocks.”

As far as predictions, it’s going to be very hard to even pick a favourite between these two sides. On the one and only occasion they met in the 2019 season, it was a breathtaking back and forth encounter and featured three comebacks over 90 minutes and Masters eventually emerging 4-3 winners.

Masters is an original League1 Ontario member that has finally made their way to the big show after years of showcasing some top players. Their attacking talents are now multiple and the team has shown they have the weapons to slice open opposing defences across the league at will.

In London, a club identity and playing style guides all teams and players within the organization and has led to deep ranks of players that head coach Mike Marcoccia can call upon without losing much of a step in tactical terms. Marcoccia is also well-versed in the one-game League1 Final model. On the women’s side of League1, he’s the most successful coach in league history, with the 2019 title already in his pocket and two others won in the past three years.

Expect London to look to manage the pace and tempo of the contest with their well-organized defensive structure and calibrated possession game, while Masters may well aim to blow the game wide-open with attacking options that would love an end-to-end battle.