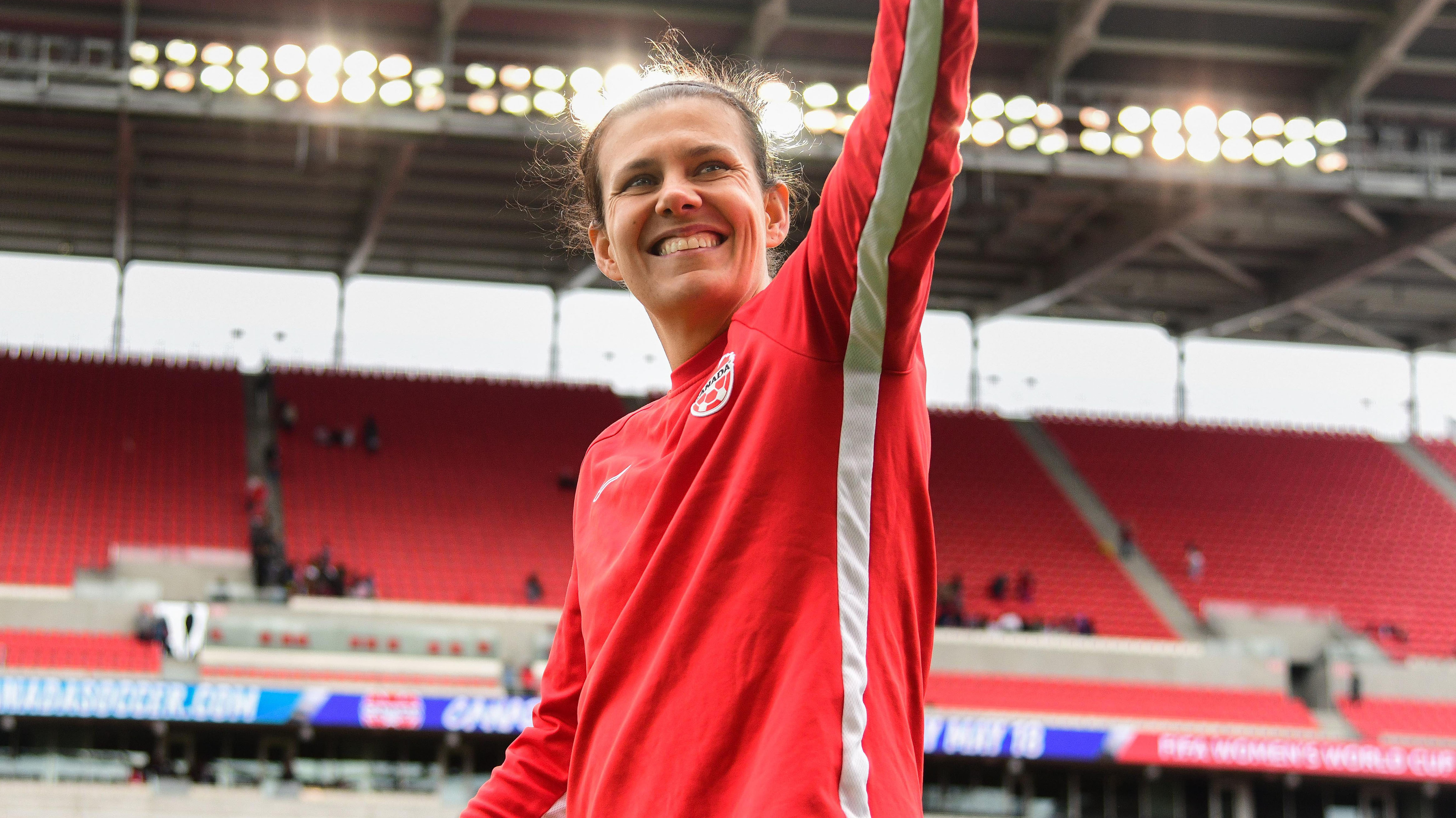 Christine Sinclair’s quest to become the all-time leading scorer in international women’s soccer continues next week when Canada takes on Japan in a friendly.

A 36-year-old native of Burnaby, B.C., Sinclair has scored 182 goals in 286 appearances since making her national team debut as a 16-year-old in 2000. She needs just two goals to tie retired U.S. star Abby Wambach’s scoring mark.

Sinclair has been stuck on 182 goals since scoring against the Netherlands in Canada’s last group-stage match at this summer’s FIFA Women’s World Cup in France. It was her lone goal of the tournament.

Heiner-Møller said that setting the record is something that is definitely on Sinclair’s mind, but that the Canadian forward hasn’t allowed it to become a distraction.

Heiner-Møller recalled 21 players from his World Cup roster, while centre backs Vanessa Gilles and Jade Rose were also named to the team. Forward Jessica De Filippo, an 18-year-old forward from the University of Louisville, has earned her first national team call-up.

Heiner-Møller called a De Filippo a “modern kind of forward.”

“She can play with her back (to) goal, she’s a great player who you can use ion the build-up, and she’s fearless in the box… That’s something we definitely need. We know that by looking back at the World Cup, (to have) that someone who is just so eager to score,” Heiner-Møller said.

Missing from the roster are midfielder Diana Matheson (203 caps) and goalkeeper Erin McLeod (118). They both sat out the World Cup due to injuries, and last played for Canada at the Algarve Cup in February. Matheson is the only player other than Sinclair to make over 200 appearances for Canada.

Heiner-Møller hinted that Matheson could miss the rest of the year for Canada, while McLeod could return for the November camp.

Also missing is Nichelle Prince who underwent knee surgery in July. Prince (11 goals, 53 caps) scored in Canada’s 2-0 win over New Zealand at the World Cup. Jenna Hellstrom, another member of Canada’s World Cup roster, is also unavailable for the Japan match due to injury.

Heiner-Møller is hopeful that Prince will be available for the November camp.

Canada is seventh in the current FIFA world rankings, four spots above Japan, who won the World Cup in 2011. The friendly in Shizuoka will be Canada’s first game since losing to Sweden in the round-of-16 at the World Cup this summer.

Canada and Japan have faced off 13 times in international play since their first encounter in 1995, their most high-profile matchup coming during the group stage of the 2012 Olympic tournament in London, which Japan won 2-1. Canada beat Japan 2-1 at the 2018 Algarve Cup, the most recent meeting between the two nations. The Japanese, who bowed in the round of 16 of this year’s World Cup, lead the all-time series against the Canadians, with six wins and three draws.

“We’re very happy to (play) Japan because it’s an opponent that has the potential of reaching more than they did at this year’s World Cup. They have a very young and interesting team, who play a very Japanese style of football, if you go back to when they become world champions,” Heiner-Møller said.

The CONCACAF qualifying tournament for the 2020 Olympics is expected to take place next February or March. Heiner-Møller confirmed that the team is trying to arrange for two friendlies during November’s international window as a means to prepare for the qualifiers.

Canada boasts a record of seven wins, three draws and two losses in 2019.