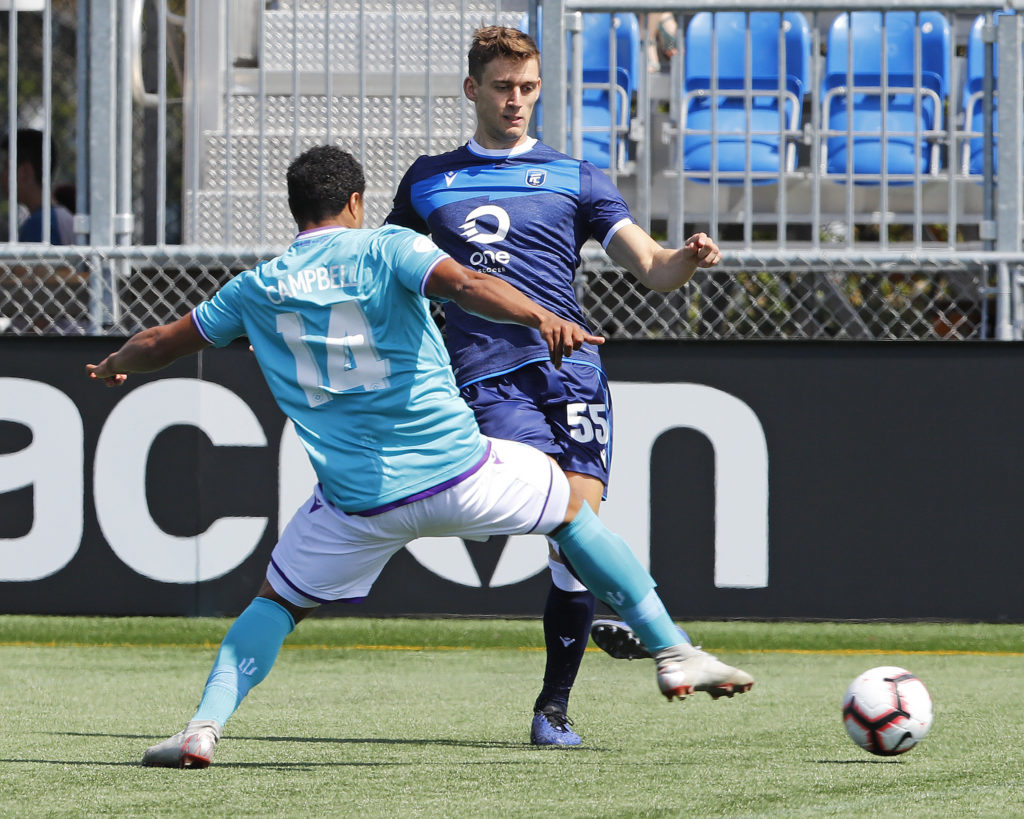 Didic, 24, becomes the second CPL player to earn a Canadian national team call-up, following in the footsteps of Cavalry FC goalkeeper Marco Carducci who was included in Canada’s squad for a pair of Nations League games against Cuba last month.

“It was my mission to get on this radar and to get selected into the Canada program,” the newly-minted Canadian international told CanPL.ca after being named to Herdman’s latest squad.

Herdman stated he will use this Canadian training camp to assess Didic more closely, and that it’s also an opportunity for the defender to step up and build upon on his CPL season with Edmonton thus far.

“The chance to see him play regularly in the Canadian Premier League this year was excellent. That’s the sort of platform and opportunity the league is providing. Someone like Amer has benefitted from that, and to see his progression in that league – he’s a player that we like his profile. He’s got an attacking profile and he’s got good physicality,” Herdman said during a Tuesday afternoon conference call with reporters.

Herdman admitted he also considered Dominick Zator for the U.S. game, but in the end he didn’t select the Cavalry FC defender. However, it’s clear that Zator is on Herdman’s radar.

“Zator in Calgary was on our wider squad list, and again, he’s a player that’s caught the eye this season,” Herdman said. “But for us, we typically play with a back four (and) two centre backs. Zator has been playing in a three (at Cavalry) and at fullback. He’s progressing and he’s someone we’ll continue to track.”

A six-foot-four centre back who came to Canada while still an infant with his family as they left what would become Bosnia and Herzegovina, Didic has established himself as one of the best defenders in the CPL with his hometown club in 2019, earning plaudits for his steady play and consistency.

He previously represented Canada at the under-23 level, and he received a call-up to the senior team for a friendly against Jamaica in 2017, but he didn’t play.

“Trying to get myself onto the national team was a big factor in my decision to come back and home and play for FC Edmonton in this league,” Didic revealed. “So, this is definitely validating, especially with the last couple of years and how it’s gone for me; it’s very rewarding. Then again, with how sports work, and with how I work, there’s always more that you want to accomplish. That’s my goal now; accomplishing more.”

After playing U.S. collegiate soccer at Baker University, Didic joined United Soccer League side Swope Park Rangers in 2016. The following year he signed with Sporting Kansas City, but he never saw any MLS action with the club, and he landed with San Antonio FC in the USL in 2018. Didic signed with FC Edmonton this past April, just before the start of the CPL season.

FC Edmonton coach Jeff Paulus recently told CanPL.ca that he thought it was a “no-brainer” that Didic would one day be on the Canadian team’s back line.

Canada currently tops Group A with six points, ahead of pointless Cuba (two losses) and the U.S. (who have yet to play). After squaring off at BMO Field, Canada and the U.S. will meet on Nov. 15 in Orlando, so this home-and-home series will likely determine who wins Group A and advances to next summer’s Nations League finals.

Beating the U.S. is also very important for Canada (ranked No. 75 in the world) if it’s going to qualify for the 2022 FIFA World Cup. Under new rules, the top six teams in CONCACAF, based on the FIFA world rankings in June 2020, move on to “the Hex,” the final round of qualifiers for the region. The top three nations in “the Hex” then qualify for the World Cup in Qatar.

Canada currently sits seventh in the CONCACAF region, behind Mexico (No. 12), the U.S (21), Costa Rica (43), Jamaica (47), Honduras (67) an El Salvador (72). In order to crack the top six by next June and advance to “the Hex,” Canada has to win games like the ones against the U.S. in order to pick up valuable ranking points and move up the FIFA ladder.

Should Canada not make “the Hex,” it would be forced to compete in a secondary CONCACAF qualifying competition, with the ultimate winner then facing the fourth-place finisher from “the Hex” in a two-game series. The winner of that would then have to play a home-and home playoff against a nation from outside CONCACAF with a World Cup berth at stake.

RELATED READING: By the numbers: Didic earns call up ahead of Zator, but how do they stack up?

If Canada stands any chance of qualifying for next summer’s Nations League finals, it’ll have to take points off the Americans in this two-game set. That’s easier said than done, considering the Red haven’t defeated the Americans in 34 years.

“There’s that (natural) rivalry, that if you’re born in Canada and grew up in Canada, you understand there is a rivalry on a sporting level and maybe culturally, as well in other aspects. The team hasn’t beaten the U.S since 1985. They came close (in subsequent games) and some of these players have been involved in those matches. … To take on a team like the U.S. and to get a result is a step that this team needs to take going forward,” Herdman stated.

Vancouver Whitecaps defender Doneil Henry is included in the team even though he is suspended after being sent off in Canada’s 1-0 road win over Cuba last month. Herdman said he named Doneil to this team because of his leadership qualities, and to give him valuable training time with the national team ahead of the return match vs. the Americans next month in Florida.