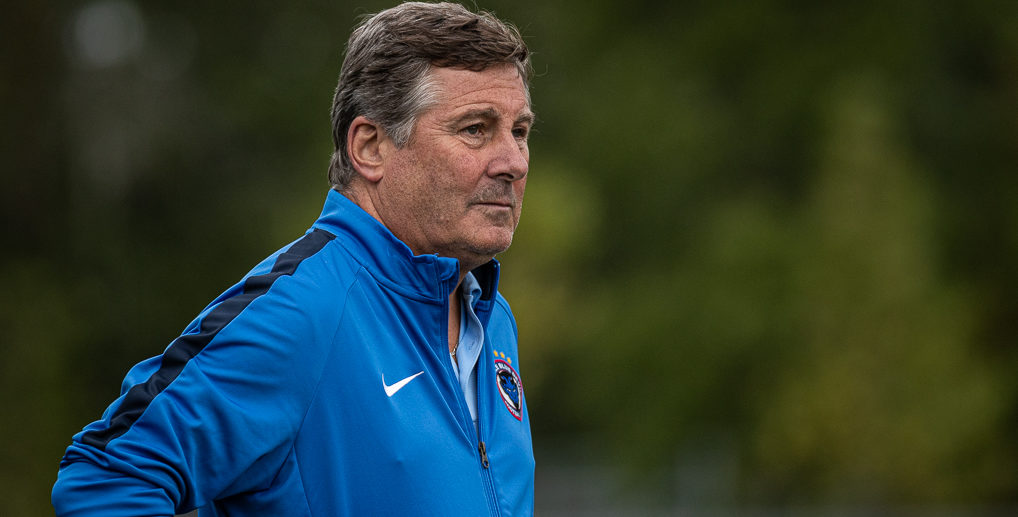 A strong hand of management is needed to guide a team to success at any level, and in the 2019 League1 Ontario there were two head coaches that stood out from the field for their ability to bring a team to full potential over the regular season.

And, in a dramatic twist, both coaches wear the same crest on their top; any idea who they might be??

Oakville Blue Devils were an absolute juggernaut in the 2019 League1 Ontario season – across both divisions.

Men’s head coach, Duncan Wilde, and women’s head coach, John Yacou, guided their teams to the top of the regular season tables with match IQ and managerial acumen in spades.

Wilde is no stranger to the top of the table. He took the Blue Devils to League1 titles in 2015 and 2017 and, although the format of competition has changed slightly over the years, he showed in 2019 that he and his technical staff of Billy Steele, Brett Mosen and Glenn McNamara still have that regular season winning knack.

The Blue Devils dropped only one loss and two draws over the 15 match slate, establishing a strong defensive base that conceded a mere eight goals (second in league) while scoring 29 (nearly an average of two goals per game).

The Blue Devils bowed out of the playoffs after a grueling second leg battle with the eventual champions, Masters FA Saints, but it took until the very final minutes of the post-season for a side to finally unlock the Blue Devils’ puzzle.

On the women’s side of the 2019 Oakville Blue Devils’ program, head coach John Yacou harnessed the full potential of a team stacked with talent and eager to prove a point.

Despite a strong regular season and clear indication of their ability over the course of the 2018 season, Yacou’s side had bowed out just ahead of playoffs (only one point short of the cut). In 2019, team and head coach returned with a vengeance.

Yacou found several top new signings with which to augment his talented team – for example, senior experience from former Canadian international Rachel Melhado and youthful quality from Patrycia Kozak – and took the league by storm.

Blue Devils’ women led the league in scoring with 47 goals from 13 matches, and were just one goal out of taking the top defensive record as well after conceding only 12 goals. A loss in late May and another in late June were the only blemishes on an otherwise perfect regular season record, during which Yacou’s side claimed six clean sheets.

The Blue Devils only seemed to gather steam through the playoff period as well, decimating Darby FC with an 8-nil aggregate scoreline over two legs before meeting powerhouse side, Woodbridge Strikers in the Semi-Finals. The opposition was a familiar one, as it was the Strikers that had put Yacou’s side out of playoff contention in 2018. In 2019, the team banished the hoodoo from the season before, winning the second leg and showing immense composure to win in penalties.

Although Yacou’s team was ultimately stopped by FC London in the Final, the team’s performance was near perfect; it took a last-gasp goal from London’s talisman and 2019 League1 Golden Boot winner, Jade Kovacevic, to eventually end a dream season.

Defenders of the year awards

Locking up shop is a defender’s priority and, with this in mind, there were a number of top locksmiths on display during the 2019 League1 campaign.

However, the 2019 Defenders of the Year also demonstrated that a good defence involves having a sharp attacking edge as well, and these players could be relied upon to produce a key goal when needed.

The team pounded out a five match run of clean sheets before giving up a handful of goals across two matches – a 3-2 win over North Miss and a 2-2 draw with Aurora – before again maintaining clean sheets over their next five matches.

After all was said and done, Alliance lost only one match in the regular season (1-0 away to Oakville Blue Devils), snagged an eleventh clean sheet on closing day, and registered one of the stingiest defensive records in the history of the league (only six goals conceded in 15 matches).

A major piece of the puzzle for Alliance was their right centre-back, Kenny Lioutas.

The 22-year old played over a thousand minutes in 12 matches. His passing ability was noted as one of the best in the league for defenders with an 84 per cent completion rate and a heat map that showed excellent mobility and range of movement to help clean up loose balls.

But Lioutas was also impressive on the attacking end, especially on set pieces. He scored three goals on the season, with an impressive free kick finish against Vaughan Azzurri as a standout highlight moment. Lioutas also provided two assists, showing an ability to create with accurate long balls, incisive line-splitting passes, or driving runs.

Woodbridge SC Strikers has been a powerhouse in the women’s division since joining the league in 2015 and in 2019 the team continued to show their quality.

Conceding only 11 goals across 13 matches, Woodbridge really came into their own towards the end of the season, when they held three clean sheets and rolled over the competition en route to a fourth seed finish.

A massive piece of the puzzle was one of their experienced defenders, Diamond Simpson.

Simpson is a former CWNT player and a mainstay in an illustrious Strikers’ team that has had several former national team program players from Canada or abroad over the years. In 2019, Simpson played every minute of the 13 match regular season and the post-season.

Like Lioutas at Alliance, Simpson matched tremendous ability on the ball with an advanced sense for positioning and tactics that led Woodbridge to a top two finish in defensive record.

And, like her Defensive Player of the Year counterpart, Simpson is a free-kick specialist and goalscoring threat.

Her three goals in the regular season were doubled with three more precise finishes in the post-season to provide an impressive six goal return over the entire campaign.