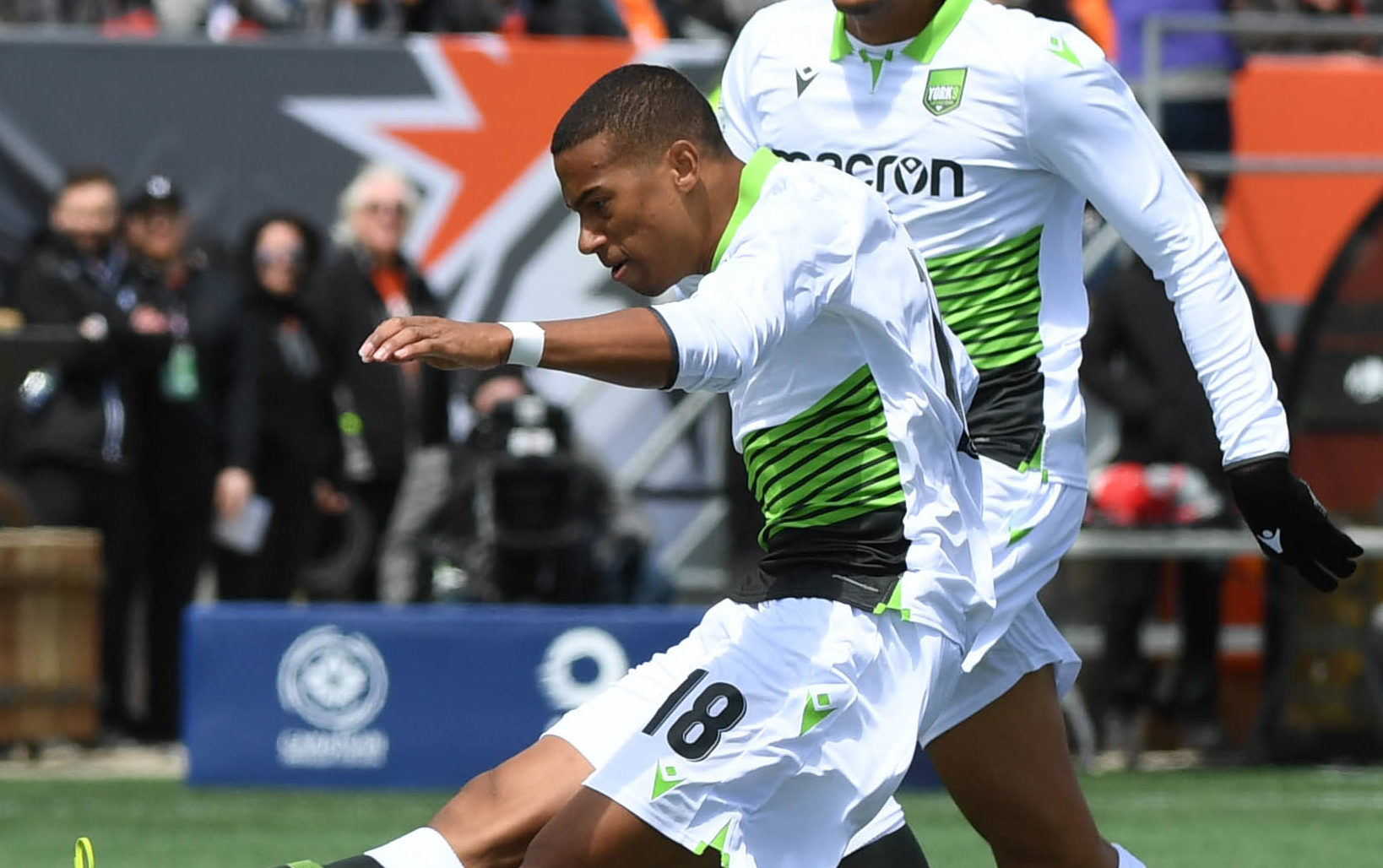 Which Canadian Premier League matchup has delivered more drama than the 905 Derby so far in 2019?

Before you say Forge-Cavalry FC, try to recall the 1-0 Forge win in June or the second leg of the Canadian Championship Qualifying Round 2. Hardly classics, wouldn’t you say?

Forge captured the first derby bragging rights with their win on Sunday, moving to a record of 3-0-1 against Y9 in the process.

That match was the first of back-to-back Ontario tilts to close out their five-game first season series. The final clash of 2019 comes Saturday (3:30 p.m. ET, available on OneSoccer) as a Thanksgiving weekend closer at York Lions Stadium.

Ahead of that final matchup, here’s a look back at some of the most enthralling moments between the CPL’s Ontario clubs in its inaugural campaign.

April 27, 2019. A day that will live long in the memory for the Canadian soccer universe – not just those between York Region and Hamilton.

York9 FC and Forge FC, given the honour of playing the Canadian Premier League’s Inaugural Game earlier in the year, walk out on the pitch at Tim Hortons Field as the start of something brand new … the excitement palpable, goosebumps up and down arms…

It did, however, set in motion a rivalry that is now forever tied to Canadian soccer history.

Of course, with the first match came the first crack at history. York9 FC’s Ryan Telfer took advantage of that chance right away.

In the third minute, breaking through the line, Telfer got on the end of a sharp pass from Aparicio.

Just like that, far before the dust had settled on Canadian soccer’s new toy, York9 FC was out in front.

Taking the inaugural league goal away from Forge, in their stadium, probably felt quite nice, too.

“(The early goal) took a lot of pressure off the backs of players that are playing in their first professional game,” Telfer said of his goal. “It let them relax and play free.”

In retrospect, this goal set Telfer off on his atmospheric ascent in 2019; a sniff from Canadian national team head coach John Herdman, a contrasting call-up to Trinidad & Tobago and his first international goal – the first by a CPL player – all came from his time in York Region and after April 27.

Way to take your chance.

May showers washed away any remnants of pageantry less than a month later when unpredictable southern Ontario weather crashed the Nine Stripes’ inaugural home opener at York Lions Stadium.

Delayed by lightning strikes in the 62nd minute, both sides went to the dressing room as the skies opened in their then-scoreless CPL fixture.

An agonizing 75-minute delay followed as lightning continued to be visible around York Lions Stadium. Eventually, both sides were faced with a 30-minute mini-match. Tied 0-0 out of the break, who will spring to the win?

Well, uhh, it was Forge. Quite convincingly.

A slip-and-slide finish from Chris Nanco and some free kick trickery by Tristan Borges sunk the Nines, who must have felt robbed.

“We had them on the ropes, had plenty of chances, lots of opportunities, we felt it was coming,” Brennan said at the time. “That delay took the wind out of our sails. The second half, our momentum kept on taking us forward, had some good possession, plenty of shots today – 20-something shots – just we couldn’t find the back of the net.

Was the result taken away from York9? Maybe. After peppering 23 shots towards goal, you’d have to feel that way.

Little did the Nines know, a win against Forge would prove rare in 2019…

An understated performer from this slate of matches, Tristan Borges has put together quite the scoring touch against York9.

His dummy one-hit finish in the aforementioned May clash, this body-feint slice in September and last week’s penalty give him three goals from three matches against his Ontarian neighbour.

The 21-year-old’s derby goals have been dramatic and important, leading to Forge wins in all three contests, all the while lifting him to the top of the CPL golden boot race.

Controversy off of Cannon St.

The Nine Stripes seemed destined to get an opening goal for the first hour; controlling play, earning solid chances and looking confident away from home. That is, of course, until fate struck the 905 Derby just like the lightning did in May.

A Tristan Borges header struck the back of Diyaeddine Abzi’s arm in the box, resulting in a Forge penalty call after 61 minutes. Protests ensued before Borges converted from the spot for his league-leading 12th goal on the season.

Now, Abzi had his back turned to Borges. Could he see the ball? Uhh, did he have eyes in the back of his head?

Then, in the depths of injury time, Rodrigo Gattas is taken down in the box, sending him and the Nines to the spot for a chance to equalize.

“Frenzied” was the word used to describe Tim Hortons Field in those dying moments. The Nines, a scrappy group looking to upset a, frankly, privileged Forge side to that point in the match, finally had a lifeline.

But the Chilean pulled his penalty wide of the post and Forge hung onto their 1–0 victory, despite York9 looking the better of the two.

A tragic end to a dramatic match for York9 who failed to earn their first win against Forge and, in doing so, end their opponent’s extended unbeaten run.