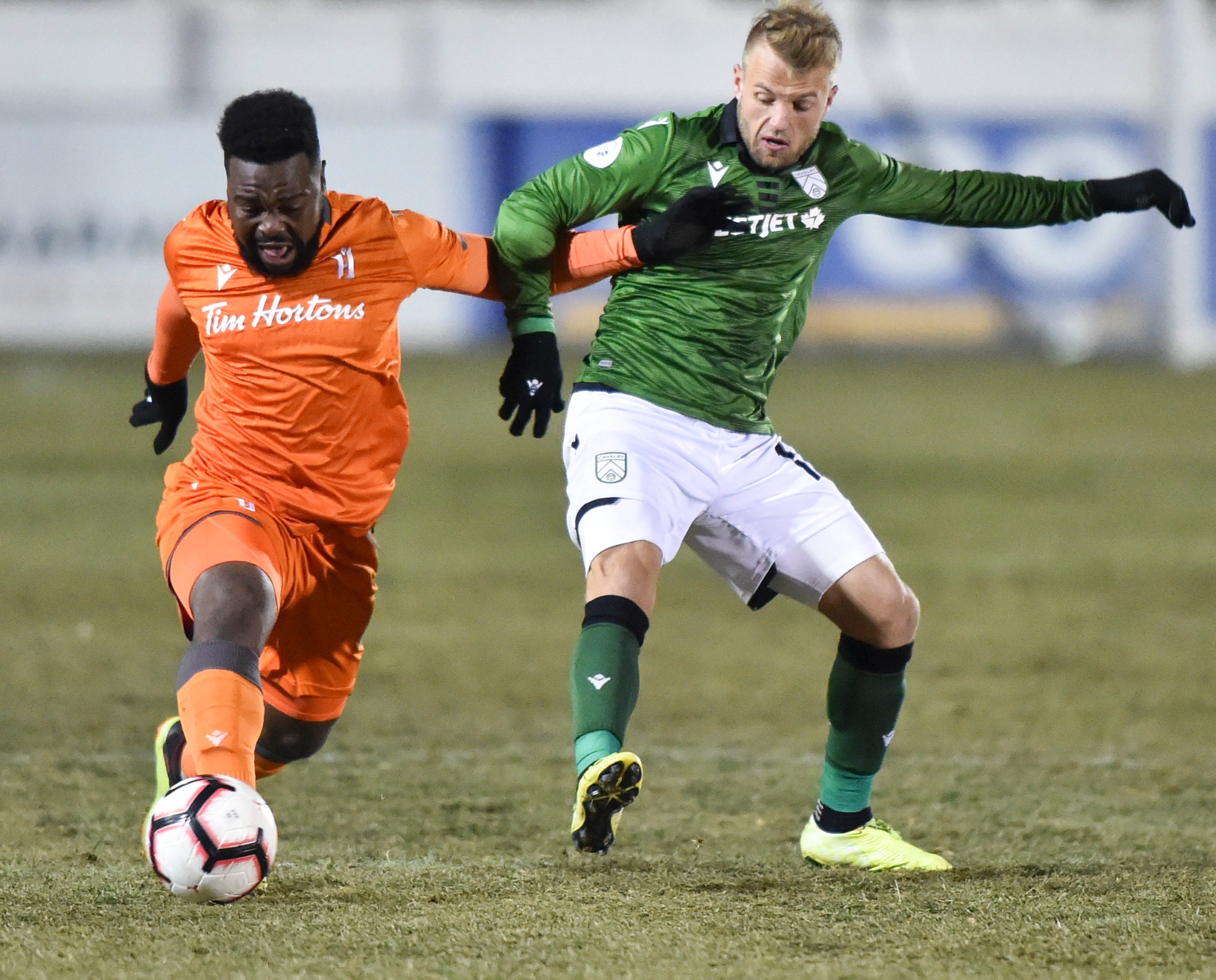 CALGARY — A preview of the 2019 Canadian Premier League Finals between Cavalry FC and visiting Forge FC was nearly upstaged by a brutal cold front that penetrated Calgary and ATCO Field in Spruce Meadows.

The striker’s brace secured a 2-1 victory over their Hamilton rivals in a back and forth battle that looked like it was destined for a draw until the 84th minute.

“Like the coach said in the locker room, we can overcome anything,” Malonga explained post-match. “It was a beautiful game. We gave the fans a good show. That’s good for the rest of the season.

“The gaffer here, he prepared us really well.”

Tommy Wheeldon Jr. beamed when he described his striker’s performance, which brings Malonga to 11 goals on the year.

“He had a great game again,” he said. “He probably should’ve had a hat trick, but that’s for another day.

“To get a player of Dominique’s quality. He’s played in Serie A; he’s played in La Liga. The Scottish leagues as well. He’s played for big clubs. He’s showed his quality. That’s the difference in a tightly contested game. He’s scoring goals in bunches. I’m proud to have him as part of the team.

Wheeldon Jr. adds, building an attack around Malonga is an easy task.

“Credit goes to Nico [Pasquotti] on one side, [Jordan] Brown on the other,” he said. “He’s got Oliver Minatel making runs.

With the three points, the Cavs catapult to the top of the Fall season standings, setting up another marquee meeting in exactly a week at Tim Hortons Field.

“They’re close games,” Wheeldon Jr. said. “I think we’re top of the table together for a reason. Two good teams that don’t give each other an inch.”

The weather did prove to be a factor Wednesday night.

“It was tough; it was tough,” Malonga chuckled. “Welcome to Calgary for me. It was a tough, tough game.”

Without sounding too much like a meteorologist, it was -4C when the game kicked off at 7:00 p.m. MT, and it got significantly colder as the night went on, with a blistering wind gusting from the southwest. The windchill had hit -12C by the final whistle.

Yes the weather hasn’t been cooperative but we do what we do best… Adapt and overcome!

Given the adverse conditions (the normal high in Calgary this time of year is 14C), it’s nothing short of a miracle that no one was hurt in the Wednesday night contest. The coach also will be the first to tell you that it was difficult to control the ball and put together lengthy cohesive passing plays.

“We’re a team that doesn’t make excuses. We make adjustments,” Wheeldon Jr. stated. “I’ve got to give credit to our grounds crew here. They were out here at 4 a.m., brushing the snow, getting the heat lamps. All down to the wire.

“We said as a team, we have to put on a performance, not only for them, but for the fans that braved the cold with us.

“No matter what happens on the field, we adapt and overcome.”

All things considered weather-wise, Wednesday’s tilt gave both sides of taste at what could possibly come Nov. 2 for the closing leg of the Finals. While the deciding game gets underway early afternoon instead of an evening starting time, it’s entirely possible it will be another cold one. After all, this is southern Alberta in the fall.

While we don’t have a crystal ball, last year, the high on Nov. 2 was 2C with drizzle and fog. Twenty-four hours later? It hit 12C. Welcome to Calgary, folks. Be ready for anything on Finals game day next month.