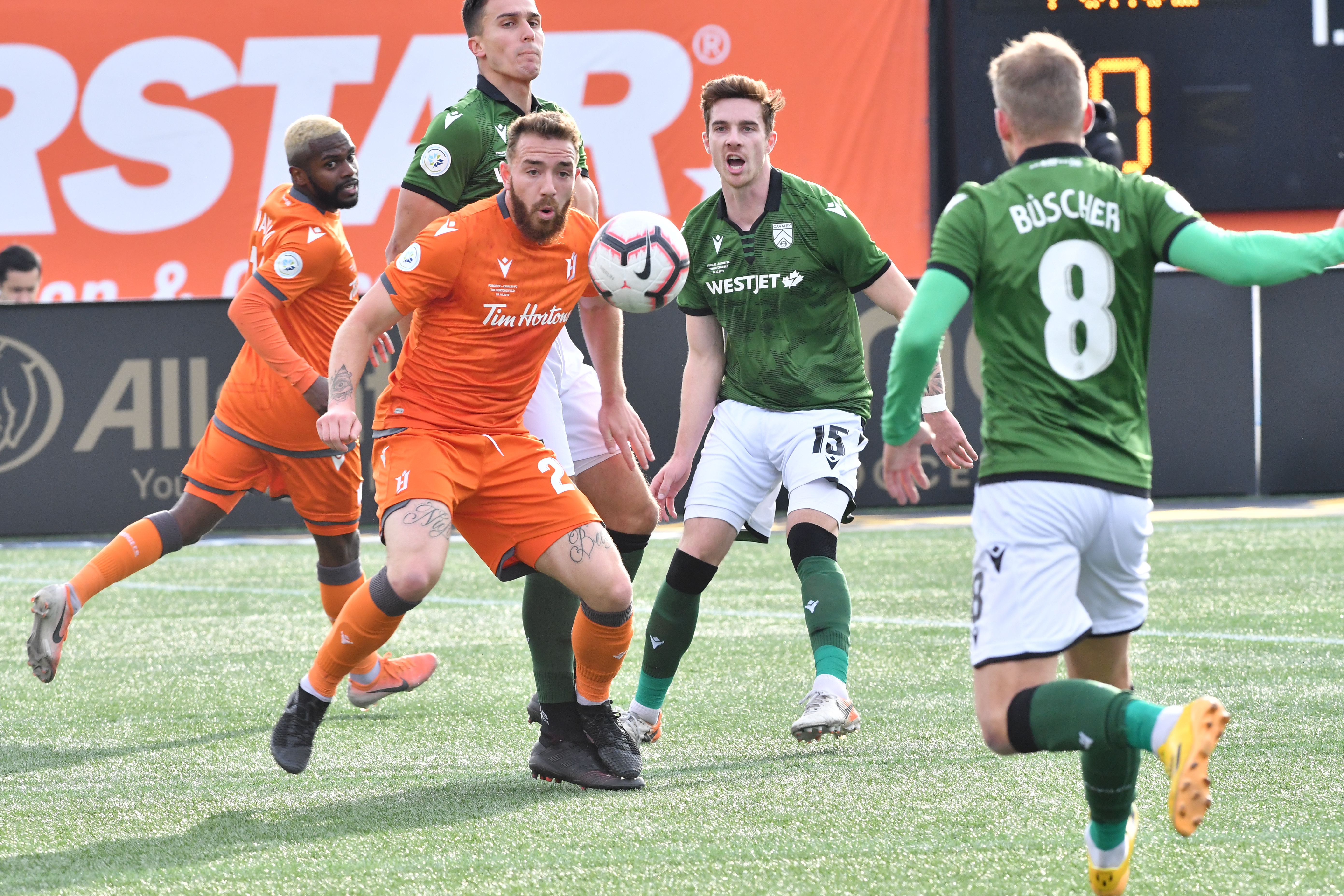 HAMILTON – It’s not often in sports that two combatants leave with smiles on their faces.

That seems to be the prevailing consensus from the Forge FC and Cavalry FC camps, though, after Forge took a narrow 1-0 advantage in Leg 1 of the Canadian Premier League Finals on Saturday.

The home side emerged with the edge on the scoreboard, out-shooting the Cavs 18–3 and out-possessing them with 68.4 per cent of the ball. At the same time, they failed to add to their lead — especially in the half-hour they spent with a man advantage after Joel Waterman’s first-half red card.

Cavalry, meanwhile, are perfectly happy to leave with a one-goal margin, withstanding a relentless Forge attack to leave everything to play for next Saturday in Calgary. They’ve lost but once at home this year, falling to Forge back in the Spring season.

“We just had to survive, and we did that,” he added, not faulting his side for struggling to test Forge’s backline.

Is the result perhaps as manageable as Cavalry could’ve hoped, given the flurry of blows sent their way in the first half?

“We kind of clung on here,” defender Mason Trafford admitted. “But we also know that when we come here, it’s a very difficult place to play. We never seem to be at our best when we play here. But we know that we’re very good at home, so it does feel good; it feels like we got out of here only one down, and now we’re going home with a big chance.”

The mood is upbeat in the winners’ locker room too, of course.

“We won. That’s all we wanted to do,” shrugged Forge captain Kyle Bekker. “There’s nothing left to do except move on and win the next one.”

Tactically, things couldn’t have gone much better for Bobby Smyrniotis, gaffer of the Forge side that dominated possession.

“We’re all over them from their goal and it’s the second time we’ve done that playing them here,” he said. “Yeah we wanted a little bit more, but we’re also happy with where we are.”

Smyrniotis was quick to point out the versatility of his side, with Giuliano Frano and Kwame Awuah sliding back into fullback roles after spending time in the middle, and Elimane Cisse and Alexander Achinioti-Jonsson reuniting to command proceedings centrally.

Depth is an asset the Hammers have leaned on all season, and it shone yet again on Saturday.

“It’s important to have that depth and players who can also be interchangeable in the way they play,” he explained, having deployed almost every player in multiple positions this season.

Really, it was everything a neutral observer could wish for in a championship match: a stunning goal, controversy at every turn, and drama in spades. The sides that have no lost love between them after eight meetings were as emotional as you’d expect. The stats sheet certainly paints that picture: 31 fouls between them, five yellow cards, and a sending-off apiece.

“The game lived up to the hype,” Forge defender David Edgar agreed. “It had a bit of everything.”

Perhaps the best thing to emerge from it all, though, is that this tie could still go either way. With Forge playing a man up for so long, Cavalry is glad to be relatively unscathed after it all. That they stayed in it until Borges’ ejection leveled the scales was a testament to the Cavs’ defending.

“That was their chance to really put us out of the tie and they didn’t take it,” Wheeldon Jr. said. “Then the game throws us another curveball and we’re still in the game.”

Forge will remember the last two-legged tie they played with Cavalry, when they led in the first half of Leg 2 at Spruce Meadows. They found themselves eliminated at the end of it all.

We have a massive chance now to go back to ATCO Field and put our stamp on the game,” Cavs skipper Nik Ledgerwood told reporters, a glint in his eye at the prospect of next weekend’s clash.

I hope it’s really cold. I hope it’s windy, I’m hoping for about -10, maybe a little bit of snow would be perfect.”