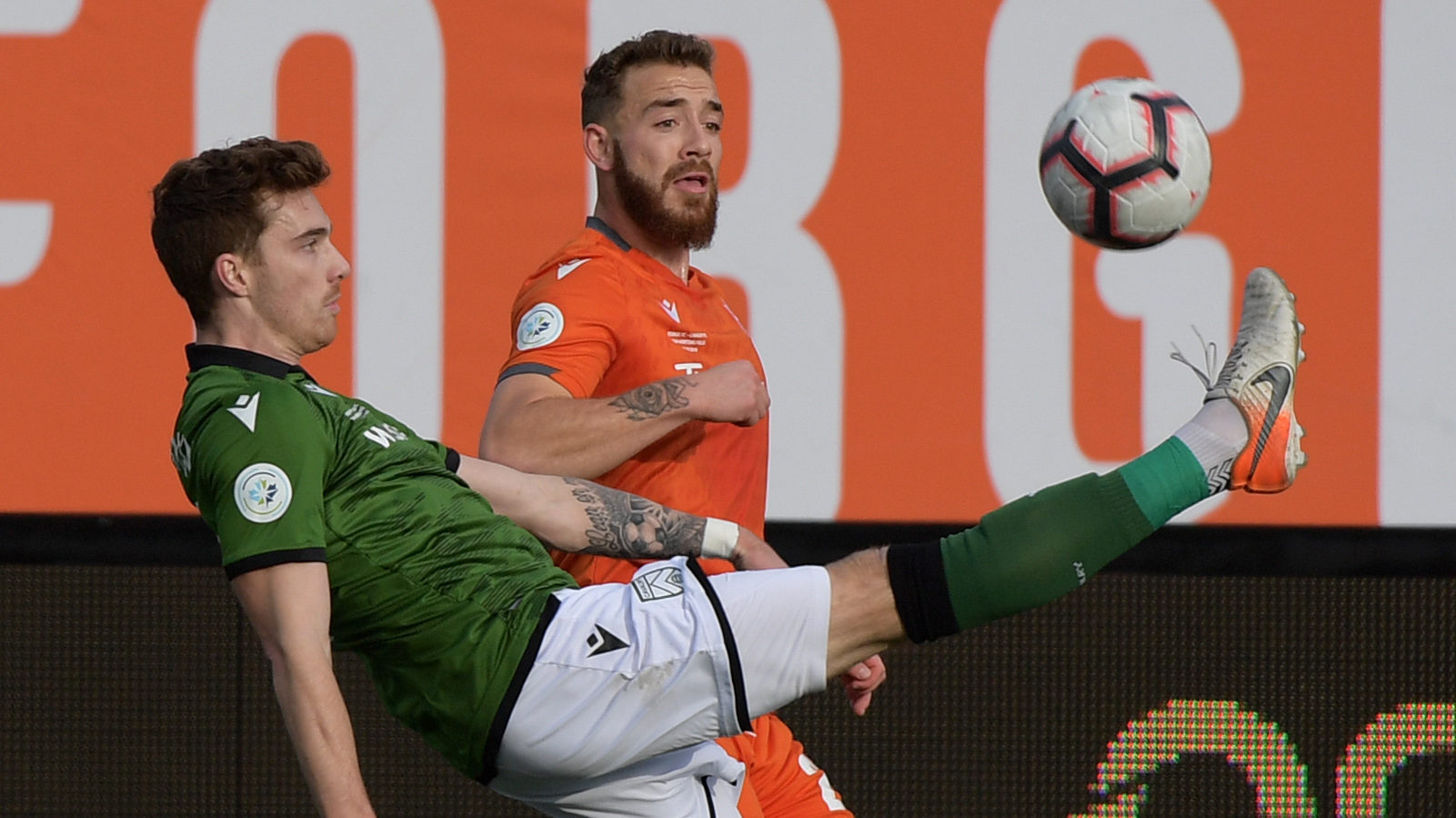 What a weekend it was in the CPL.

With Leg 1 of the first Canadian Premier League Finals now etched into the record books, there’s a ton to discuss ahead of Saturday’s return match in Calgary.

Forge FC has a narrow 1-0 lead over Cavalry FC after jumping ahead of their rivals at Tim Hortons Field, but could they have got more from their home leg?

There are a ton of ways to look at what unfolded in Hamilton. So, here are five key numbers that not only help tell the story of that match, but could also give us insights into how Leg 2 might play out.

(All data is from Sportlogiq or Opta)

That’s how long Cavalry went without a shot on Saturday, as Nik Ledgerwood’s attempt on target was the only time they threatened the Forge goal.

Keep in mind, less than half of that stretch came after Joel Waterman’s red card, meaning the Cavs only had 10 men for much of it.

For reference, Forge had 15 shots over the course of that hour or so, including three hit crossbars and a goal from Tristan Borges.

Cavalry’s attack has very rarely been shut down so thoroughly; their three total shots on Saturday matches their lowest total from this season (which came in a 0-0 draw with HFX Wanderers FC in August).

Cavalry didn’t have much possession on Saturday, but when they did have the ball, they weren’t particularly conservative with it. They played just under 45 per cent of their passes forward (which is fairly typical for them; they like to play on the front foot and make the opponent run backwards).

Where it fell apart, though, was that they just couldn’t hit their targets. The Cavs succeeded with just 48 of their 118 forward passes — a success rate of 40.7 per cent, well below from their 63.7 per cent mark from the Fall season.

They also took a 15 per cent drop in the accuracy of their long passes, hitting just 14 on the day. Cavalry took about as many risks as they normally do with possession, but those risks did not pay off nearly as well as they typically have this season.

By comparison, Forge (who made three times as many passes as their Albertan foes) chose the forward option significantly less, but they still made 148 successful passes downfield, for a 68.5 per cent accuracy rating.

The home side was more prudent with choosing their passes, but we also shouldn’t forget that, in many ways, they brought about Cavalry’s low pass accuracy with relentless pressure.

When Forge attacked in Leg 1, 82.6 per cent of their possession went up one of the wings. CanPL.ca’s Steven Sandor went into detail already about how Bobby Smyrniotis set his team up to dominate in an area where Cavalry usually thrives, but it’s worth quantifying here.

On the left side alone, Kwame Awuah and Chris Nanco exchanged 19 passes between each other as they overwhelmed their opponents with overlaps.

In fact, 10 of Forge’s open-play shots came from an attacking move that started out wide, whether it was Nanco cutting in towards the middle or Giuliano Frano sending in a cross from the right flank.

For Cavalry to overturn this deficit in Leg 2, they’ll have to regain an advantage in the wide areas of the pitch, since it seems that’s where this battle will be won or lost.

It’s hard to get much going offensively when you can’t get your striker involved. Cavalry’s Dominique Malonga only received three passes in roughly an hour of work, as he was often quite isolated at the top of the lineup.

Malonga dropped back fairly often to try and help out defensively, so many of his 14 touches on the ball were won himself. He worked hard to try and get on the ball on Saturday, but it was hard for Cavalry’s midfielders to find him because of how well Forge shielded Malonga.

With 11 goals to his name in the CPL this year, a more involved Malonga would certainly have boosted Cavalry’s odds of scoring. Certainly, they weren’t necessarily putting all their efforts into finding an away goal, but even if they had it would’ve been tough to create much with Forge neutralizing their best scoring threat so well.

If Cavalry isn’t going to win the wing battles in Leg 2, then they might need someone such as Sergio Camargo to step in and play the ball through to Malonga more centrally.

Okay, it’s not necessarily a statistic from the match. Still, Leg 1 wouldn’t have been the same without 10,486 fans in attendance in Hamilton. The Barton St. Battalion were noisier than ever in the north-east corner of Tim Hortons Field, and the handful of travelling Cavalry fans added to the sense of occasion.

Both sides played with an intensity that could only be born of a championship atmosphere, which fans in the Hammer certainly delivered. There’s no denying Forge played with a little extra edge with that orange wall of support backing them.

Focus now shifts to Calgary, where the Cavs will be hoping that the Foot Soldiers and fellow supporters at ATCO Field can give them the same sort of boost.