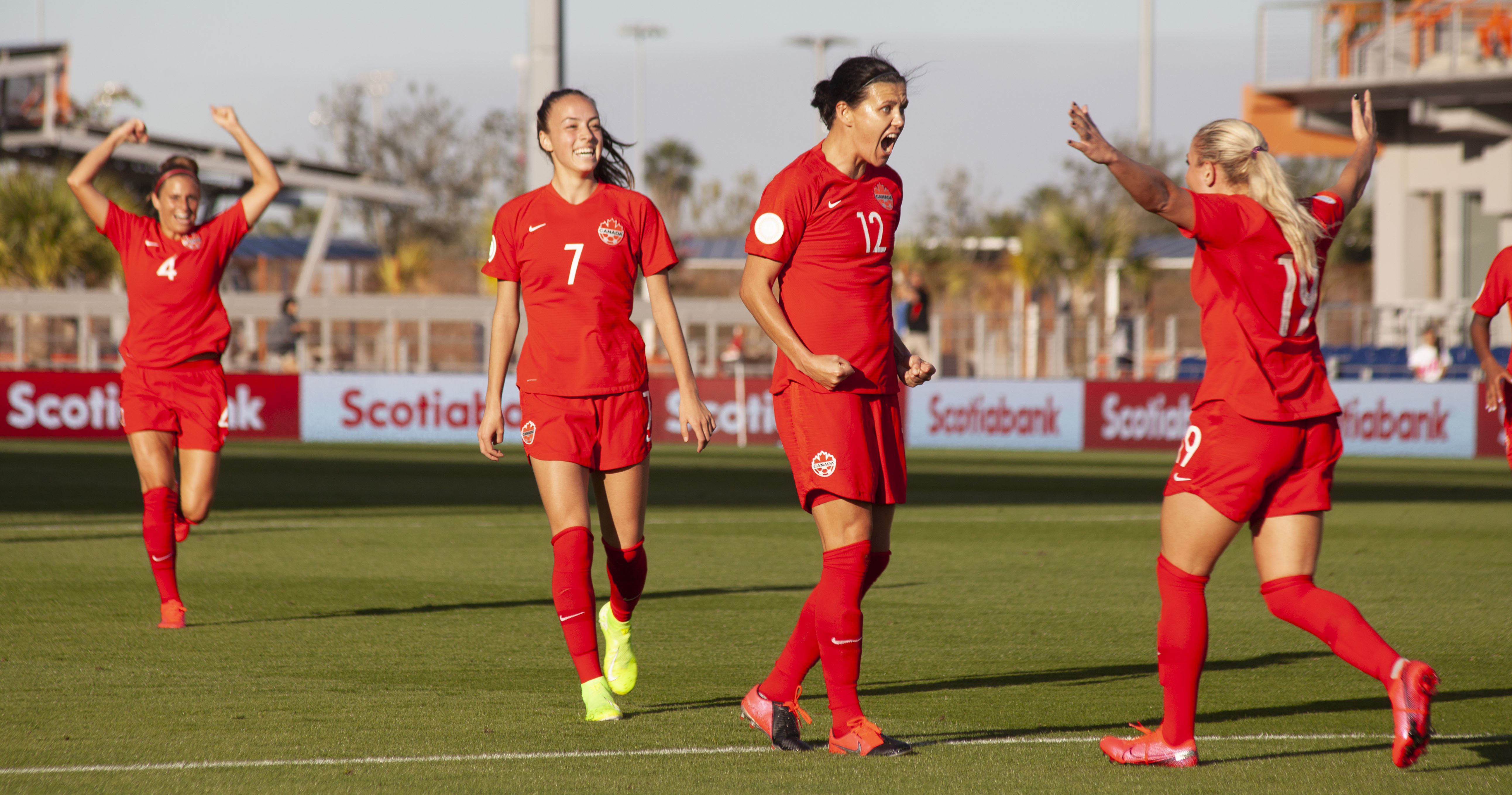 From Argentina to Zimbabwe, Brazil to Wales, and places in between such as China, Finland, and Guyana, Sinclair has scored, and scored, and scored – and then scored again. Her exploits span the globe, the iconic Canadian captain wreaking goal-scoring havoc wherever she’s travelled, earning the universal respect and accolades of fans along the way.

And yet, it wasn’t some hallowed football cathedral such as Old Trafford (where she scored the most memorable hat-trick of her career), or a football-mad part of the world, or on Canadian soil before an appreciative home crowd where Sinclair wrote her name into the history books.

Instead, it was in this far-off soccer outpost in Southeast Texas, and it passed with little fanfare, the gravity of the accomplishment seemingly lost on the few spectators in attendance.

H-E-B Park Stadium is a gorgeous and modern 9,700-seat venue. But the overwhelming majority of those seats were empty on Wednesday night when, in the 23rd minute of Canada’s 11-0 romp over Saint Kitts and Nevis, Sinclair scored her 185th goal and edged past retired U.S. star Abby Wambach to become the all-time leading international scorer, for both men and women.

The complete lack of occasion surrounding such a momentous milestone was noticeable and more than a little surreal, as Sinclair wasn’t properly feted considering the significance of the occasion. Canada Soccer officials did their very best to make it a festive evening but, ultimately, a champagne shower from Sinclair’s teammates had to suffice. Even the front page of the sports section of the local newspaper gave Sinclair’s record-breaking night second billing, and instead led with the news of Mexico’s win over Jamaica.

None of that should take away from the significance of what Sinclair has accomplished, though.

And in case you don’t fully understand it, here it is, in the most basic of terms: In the vast and long history of international soccer, nobody – man or woman – has scored more goals than Christine Sinclair. Nobody.

Pele, Maradona, Platini, Zidane, Cruyff, Di Stefano, and the other members of soccer’s hallowed pantheon are looking up toward Sinclair. She sits alone atop the international goal-scoring charts.

Iran’s Ali Daei scored 109 goals in 149 appearances for Iran from 1993 to 2006. Cristiano Ronaldo, just 10 goals back, is poised to usurp the Iranian as the all-time international scorer on the men’s side. When he does, you can bet the news will go worldwide, spawn a slew of social media memes, and the Portuguese star will rightly be celebrated in all corners. Of course, the women’s and men’s games are vastly different, so you can’t compare the two; it’s apples and oranges.

That being said, the fact remains that a 36-year-old woman from Burnaby, B.C. ranks as the greatest international scorer in the most popular sport on the planet, and the sport played and watched by more people around the world than any other.

A Canadian. Let that sink in for a second. Canada isn’t a soccer country? Tell that to Sinclair.

“I’m a proud Canadian, and I’m proud that a Canadian is on top of the list, I’m not going to lie. … I’ve been fortunate that my career has mirrored the growth of the national team and the opportunities that are available now. I’ve been very, very fortunate, but to have a Canadian on top of the list, from a so-called hockey country, it’s pretty cool,” Sinclair told reporters on Thursday.

Sinclair recognizes her status as an international soccer icon. She’s just not terribly comfortable occupying the space reserved for “athlete superstars,” preferring to use her celebrity to advance the cause of women’s soccer, and inspire the next generation of Canadian girls to take up the game who will aspire to play for their country one day.

“It’s just who I am. This environment (the media attention) has never been the most comfortable for me, but at the same time, I’m proud to represent women’s soccer; I’m proud that people care,” said Sinclair, who earned her first of 290 caps for Canada as a 16-year-old on March 12, 2000.

“When I first joined the national team, my first World Cup (in 2003), I don’t even think people in Canada knew it was happening. To see the changes in that has been remarkable, and it’s only going to get bigger and better. Knowing I’ve been a small part of that, it’s pretty special.”

RELATED READING: MOSCATO: A salute to a friend and legend, Christine Sinclair

A day has passed since Sinclair broke the record. She admitted that it’s been a whirlwind in the aftermath of her heroics, with her phone blowing up from family and friends, and several media interviews to sit through.

Now it’s back to business.

“To have broken the record is a relief off my shoulders. Now I can actually go out and enjoy it, and help Canada qualify for the Olympics, because that’s the true focus of this tournament now that that goal thing is out of the way,” Sinclair offered.

And looking beyond the Tokyo Olympics? Should Canada qualify, will that be Sinclair’s swan song? Is she even thinking that far ahead into the future?

As long as coach Canadian coach Kenneth Heiner-Møller continues see a place for her, Sinclair seems keen to keep going.

“For the past four or five years, I’ve always said we’ll get to the end of Tokyo and see where I’m at. As long as I have the passion, and I’m healthy, and Kenneth still wants me to be around, then I’ll probably be around,” Sinclair said.