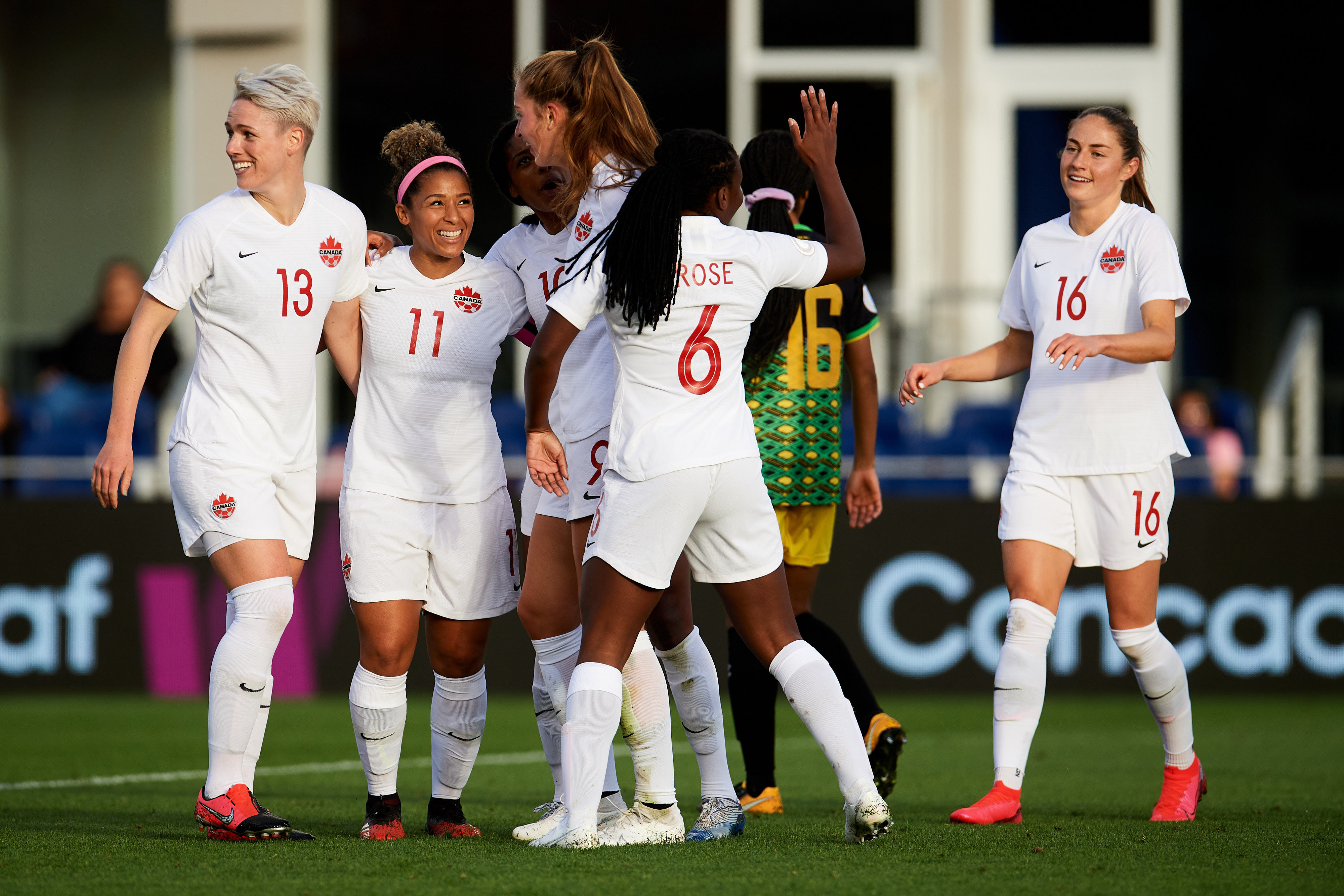 EDINBURG, TEXAS – No Christine Sinclair? No problem for Canada.

Three days after scoring her 185th goal to become the all-time top scorer in international soccer, Canada’s iconic captain was given the day off and watched from the bench as Les Rouges dismantled Jamaica 9-0 on Saturday evening at the Concacaf Olympic qualifying tournament.

Jordyn Huitema had a career night with five goals, Janine Beckie netted a hat trick, and Deanne Rose also scored and had three assists for Canada, who by virtue of this win secured a spot in the tournament semifinals and moved one step closer towards qualifying for this summer’s Tokyo Olympics.

The announced crowd of 2,010 fans at H-E-B Park saw a mugging on Saturday night, as Canada ripped apart Jamaica with sheer ruthlessness. They also caught a glimpse of Canada’s crop of bright young stars, most notably teenagers Huitema and Rose.

“Our young players always bring such a different flair and talent to this team than we’ve seen before. Our older players have the grit and the Canadian DNA, and as time has gone on they’ve developed the part of the game that we’re now seeing a lot of in the younger players,” said Beckie, a 25-year-old forward who plays professionally with Manchester City.

“Five goals in a game is unbelievable. I think people have just started to see the beginning of what our young players can do.”

Incredibly Huitema, Beckie and Rose accounted for all of Canada’s goals, after each of them either didn’t play (Beckie and Rose) or were used as subs (Huitema) in Canada’s first game of the tournament.

“I think you can see the quality that we have in our starting 11 and off the bench. Anyone can start in this team… I think (the trio of newcomers) played a fantastic match. The crosses, the finishing – they were clinical tonight. They were feeling it,” enthused veteran midfielder Desiree Scott.

Huitema made history as only the second player to score five goals in a game for Canada. Silvana Burtini did it twice, scoring five vs. Mexico in 1994 and then eight vs. Puerto Rico in 1998.

“With the amount of skilful players who’ve come before me, it’s honestly shocking that I’m the second player to do it. But I’m very grateful, very humbled,” Huitema offered.

An 18-year-old star who plays in France with Paris Saint-Germain, Huitema demonstrated why she’s being touted as Canada’s next big star goal scorer.

Saturday marked the first time Sinclair didn’t start for Canada in 12 games, a streak that dates back to an April 8, 2019 friendly against Nigeria held in Spain.

Canada currently tops Group B with six points (and a plus-20 goal difference, the first tiebreaker). Mexico is also on six points (plus-seven), and has advanced to the semis. Jamaica and Saint Kitts (both zero points) are tied for last place and have been eliminated from contention.

Canada plays Mexico next Tuesday in Edinburg with first place in Group B on the line. A tie for Canada against Mexico would mean it wins the group. The top two nations in Group A and B advance to the semifinals of this Concacaf competition. Only the two finalists qualify for the Olympics.

Group A consists of two-time reigning World Cup champions United States (ranked No. 1 in the world), Costa Rica (37), Panama (53) and Haiti (68). The U.S. and Costa Rica currently lead Group A with six points each and both have already booked their spots in the semifinals.

Winning Group B would likely give Canada an easier path towards earning an Olympic berth. It’s fair to assume the top-ranked U.S. will win Group A, so Canada will want to avoid a final-four showdown with its southern neighbours – a semifinal vs. Costa Rica poses a far easier challenge for the Canadian side. Canada has lost to the U.S. in the finals at the last three Concacaf Olympic qualifying tournaments.

With Sinclair on the bench, Scott (who became only the fifth player to earn 150 caps for Canada) wore the captain’s armband. Also drafted into the starting 11 were goalkeeper Stephanie Labbe, defender Allysha Chapman, and forwards Beckie, Huitema and Rose.

Games come fast and furious in this competition – Canada will play five times in a 12-day span if it goes all the way to the finals. So, it hardly came as a surprise that Heiner-Møller rotated his squad for this match, and rested Sinclair for next Tuesday’s encounter against Mexico.

Canada is a perfect 8-0-0 all-time against Jamaica, having outscored the Reggae Girlz by a combined score of 57-1.

Canada is eighth in the current FIFA world rankingS, well above Jamaica (No. 51) and the gap in class between the two sides was painfully evident on this night. Even without Sinclair, Canada completely dominated Jamaica, dictating possession and the pace of the match.

Scott was a defensive bulwark in the middle of the park, while Ashley Lawrence and Sophie Schmidt ran themselves ragged in central midfield, helping out Scott on the defensive end, while also supplying service to the forwards up front. The attacking trio of Huitema, Rose and Beckie linked up to devastating effect in mercilessly shredding Jamaica’s meagre defence.

It took Canada only 10 minutes to open the scoring, with Huitema banging in a rebound in the aftermath of a mad goal-mouth scramble after Jamaica couldn’t clear its lines. Canada padded its lead six minutes later on an expertly-worked give-and-go that saw Schmidt release Beckie down the right wing. Beckie then whipped an inch-perfect cross deep into the box for Rose to bundle home.

Canada caught Jamaica out in the transition, and Beckie turned from provider to goal-scorer just before half, slotting home past helpless Jamaican goalkeeper Sydney Schneider off a setup from Huitema.

It was more of the same at the start of the second half. An unfortunate deflection off a Jamaican player sent Beckie on a clear breakaway, and the Canadian forward kept her composure as she raced towards goal before firing past Schneider.

Soon, it was 5-0. Rose did some outstanding work along the goal-line to keep the ball alive while fending off a Jamaican defender and then delivered a beautiful cross into the six yard-box that Huitema headed home.

Huitema completed her hat-trick just after the hour mark, converting a feed played across the box from Beckie into an empty net.

Rose collected another assist, this time in setting up Beckie, who slotted past Schneider at the far post with a shot from the edge of the six-yard box to record a hat-trick of her own.

Canada completed the rout when Huitema headed home at the back post and then scored her tournament-leading sixth goal deep into injury time.

NOTES: The Concacaf tournament semifinals and finals are scheduled for Feb. 7 to 9 in Carson, California…. The Canadian women have qualified for the last three Olympics, winning bronze medals at the 2012 Olympics in London and the 2016 Olympics in Rio… Canada did not qualify for the 2004 Games in Athens, as it was upset by Mexico in the semifinals of the Concacaf qualifying tournament… Canada sports an all-time record of 21-2-1 against Mexico, with their lone loss coming in 2004.