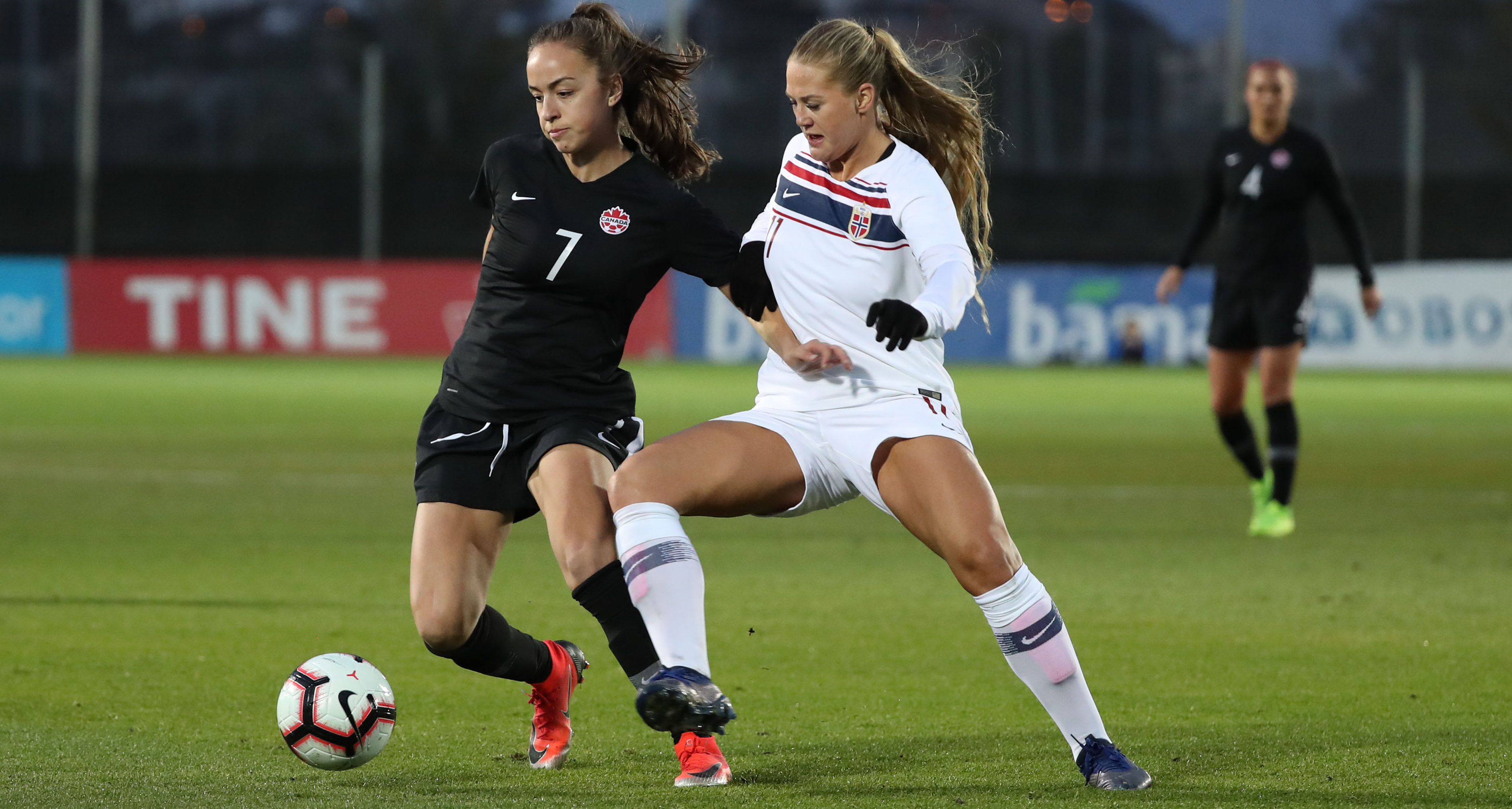 Other players have stepped up, too, and played pivotal roles in helping Canada advance to the semifinals, putting the team on the brink of qualifying for the 2020 Tokyo Olympics.

Jordyn Huitema has scored a tournament-leading six goals. Veteran midfielder Desiree Scott captained the team in Sinclair’s absence, and became only the fifth Canadian to earn 150 caps. Kadeisha Buchanan and Shelina Zadorsky have quarterbacked a defence that recorded three clean sheets in the group stage.

Julia Grosso’s contributions to the Canadian cause haven’t garnered similar headlines. But she did put in a solid shift when she started in central midfield in Canada’s opening game against Saint Kitts and Nevis, collecting an assist on one of Ashley Lawrence’s two goals on the night. She was also a substitute vs. Jamaica in Canada’s second match, helping the Reds preserve the shutout.

Grosso was handed her national team debut by John Herdman in 2017, coming on as a late substitute in a friendly vs. the United States. Since then, she’s collected 18 caps for Canada, seven as a starter, and was part of the Canadian squad at last year’s World Cup (she didn’t play).

Grosso also has a big backer in her corner in Sinclair, who believes the 19-year-old native of Vancouver has a big future ahead of her, especially with the national team, if she wants it.

“She can do whatever she wants in this game, she’s that talented. She has an excellent role model to look up to in Desiree Scott, to learn from and absorb as much as she can. I fully believe (Desiree) is the best holding midfielder in the game and one day I’m sure Julia will fill her shoes. She has a long future with this team,” Sinclair told CanPL.ca.

With a bit of experience under her belt, Grosso can no longer be considered a national team newcomer. But as one of the youngest players on the roster, she still follows the example set by Scott and other veterans on the Canadian side.

“They all treat me like their younger sister, but at the same time like everybody else. Some of them have mentored me in a positive way, so it’s great that I get to learn from some of the best in the women’s game. When I’m their age, I hope can do the same for the younger players,” Grosso told CanPL.ca

Grosso’s game isn’t flashy, but you need holding midfielders like her who can retain possession, and effectively distribute the ball and link up with attacking players.

“She set the pace for the game against Saint Kitts and Nevis. She did a great job. Her passing average was sky high, and she just didn’t play it square or backwards. She played it forward, too,” Canadian coach Kenneth Heiner-Møller offered.

“She’s got amazing technical ability, a strong left foot, great vision of the game. It’s exciting to see her get her that experience in this tournament,” Schmidt told CanPL.ca.

Canada’s group-stage games in Edinburg were like a home-away-from-home experience for Grosso, who plays collegiate soccer for the University of Texas in Austin, a four-hour drive away.

Life as a Texas Longhorn has been good to the Canadian thus far. Grosso was named to the Big 12 Conference’s All-Freshman Team in 2018. Last year, she logged over 1,400 minutes of playing time in 17 appearances for the Longhorns, who bowed out it the first round of the NCAA Division I Women’s Soccer Tournament.

Making the transition from the NCAA ranks to the Canadian national team poses challenges for the Canadian youngster, though.

Gross0 has been in the national team program since 2014 when she first played for Canada’s under-15 team. Time spent with the under-17 and under-20 sides helped further her development, and eventually led to regular call-ups for the senior team under Heiner-Møller.

“She’s grown so much. She is still in university, and it tells sometimes when she’s coming into camp. Not to say anything bad about the NCAA, but it’s a different tempo that we are playing at,” Heiner-Møller explained.

“The good thing about Julia is that she’s stepping up so quickly. When you play at some level and then you play at higher level, some players take years to adapt. She can do it (quickly).”

Still a sophomore in school, Grosso is studying sports management, but is considering changing her major to kinesiology. As to her future in soccer, at the moment, she’s not thinking about either playing in the U.S. based National Women’s Soccer League, or with a club in Europe.

There have been previous Canadian players who have left school early to turn pro, but for now, it’s clear that Grosso is focused on her studies.

“I’m not so sure yet about my future. Obviously, the pro path is a possibility. But I’m not 100 per cent positive what my next steps are going to be. I’m still in school, so I’ll see how this year goes and then I’ll see how things stand after that,” Gross explained.

Based on what he’s seen of Grosso thus far, Heiner-Møller believes the teenager could have a successful pro career.

“She’s got a great future ahead of her, I’m sure of that, if she wants it. I hope she does, and (that) she stays healthy and committed,” Heiner-Møller said.