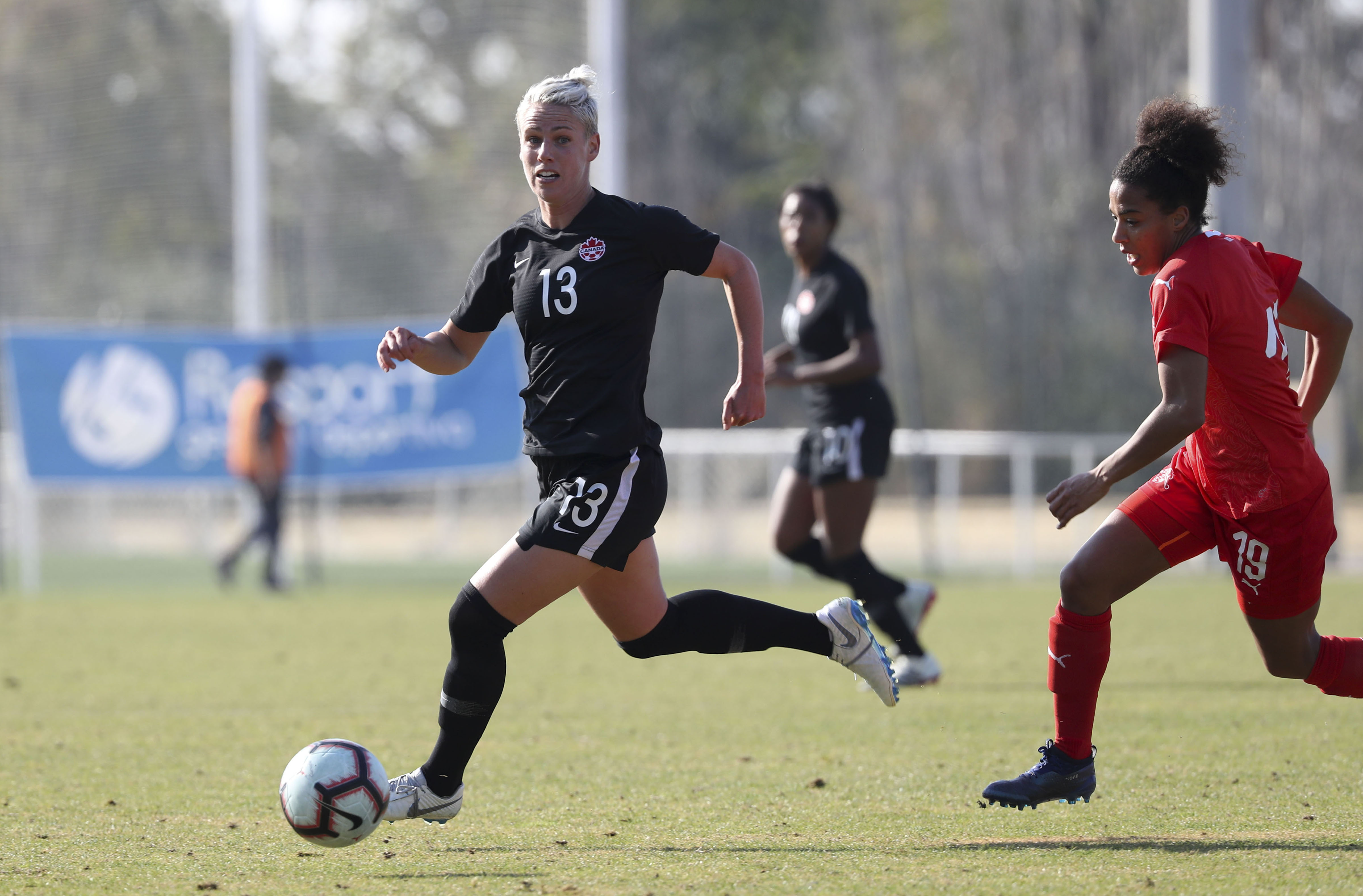 Canadian footballer Sophie Schmidt is an interesting case study in the dichotomous nature of the human personality.

On the pitch, Schmidt is a dogged and determined midfielder, one who can skillfully pick out a teammate with a perfectly weighted pass, but also someone who is not afraid to get stuck in and do the dirty work to win back possession for her team.

Off the field, the veteran midfielder cuts a far more unassuming figure, untouched by her success and her esteemed standing within the Canadian women’s team.

Case in point. Canada plays Costa Rica in the semifinals of the Concacaf Olympic qualifying tournament on Friday in Carson, California. The winner not only advances to the finals two days later in Carson, but also clinches a berth at this summer’s Tokyo Olympics.

In all likelihood, Schmidt, a 31-year-old from Abbotsford, B.C., will earn her 195th cap for Canada in the do-or-die showdown with Costa Rica, and inch closer to joining a pretty exclusive group. Only Christine Sinclair (291 appearances) and Diana Matheson (203) have earned 200 caps for Canada.

Schmidt will become a member of the 200 cap club at some point this year, but she didn’t even know she was closing in on the special milestone when recently informed of it by CanPL.ca.

“How many do I need? Wow, that’s pretty cool, eh? A few games away, though. The prospect is exciting, and to join that elite club is pretty humbling,” Schmidt said with her trademark modesty.

Hitting the 200-game plateau will be a long time in coming for Schmidt, who first joined the Canadian youth program in 2003 when she was 14. The following year, she represented Canada at the FIFA U-20 Women’s World Cup in Thailand, and again at the 2006 U-20 World Cup in Russia.

She earned her first cap for Canada as a 16-year-old when she started in a friendly against the Netherlands on April 19, 2005, and bagged her first goal that same month. Since then, she’s been a mainstay in Canada’s lineup (of her 194 caps, 169 have come as a starter), scoring 19 goals and tallying 20 assists.

Schmidt has always been there for Canada, playing in countless friendlies and qualifying tournaments, as well as three Olympics (helping the Reds win bronze in 2012 and 2016) and in four FIFA Women’s World Cups.

Incredibly, she played in 76 consecutive matches for Canada from 2011 to 2015, and followed that streak up with another one when she appeared in 24 straight games from 2016 to 2017.

“It’s been a long time when you think about how many years I’ve been on the national team. It’s pretty incredible, and I’m honoured and thankful for the opportunities I’ve been given, and that I’ve been able to stay healthy. That’s an issue with a lot of players, and that’s been a key to my longevity, but it’s a been a fun ride,” Schmidt said.

Schmidt shows no signs of slowing down, either. If all goes well, she’ll figure prominently for Canada at this summer’s Olympics, and it wouldn’t be at all surprising to see her compete at the 2023 Women’s World Cup.

She’s clearly been an important player for Canada, and is a lock to one day be inducted into Canada Soccer’s Hall of Fame. But there is a level of humility within the veteran midfielder that is incongruent with her level of success.

When asked if she sees a bit of herself in any of the current youngsters on the national team, Schmidt expertly deflects and points out her younger teammates are further along in their development than she was at their age.

“That’s hard to answer because I’m so old,” quipped Schmidt, who plays her club soccer with the Houston Dash in the NWSL.

“I feel like everybody has surpassed what I did when I first came on and joined this team. The athleticism and technical ability – the players who are coming in now are so more developed. Their skills are refined way more than mine were when I first came through.”

Closer to home, Schmidt is encouraged by the work currently being done by former teammate Carmelina Moscato, who as part of her role as Manager of Women’s Professional Football Development for Canadian Soccer Business is looking at the feasibility of launching a professional women’s league in Canada.

“I definitely support the idea. We’re one of the only countries in the top ten (FIFA world rankings) that doesn’t have a league, so all of our players have to go elsewhere to look for opportunities. The hunger for football in Canada is so great that it‘d be great to provide players with a platform like this, and for fans to support Canadian fans at home,” Schmidt offered.

NOTES: Ranked eighth in the world, Canada is a perfect 13-0-0 vs. Costa Rica (No. 37)… The Canadian women’s team have qualified for the last three Olympics, winning bronze medals in 2012 in London and 2016 in Rio… Canada did not qualify for the 2004 Games in Athens, as it was upset by Mexico in the semifinals of the Concacaf qualifying tournament… The U.S. plays Mexico in Friday’s other semifinal. Only the tournament finalists qualify for the Olympics.