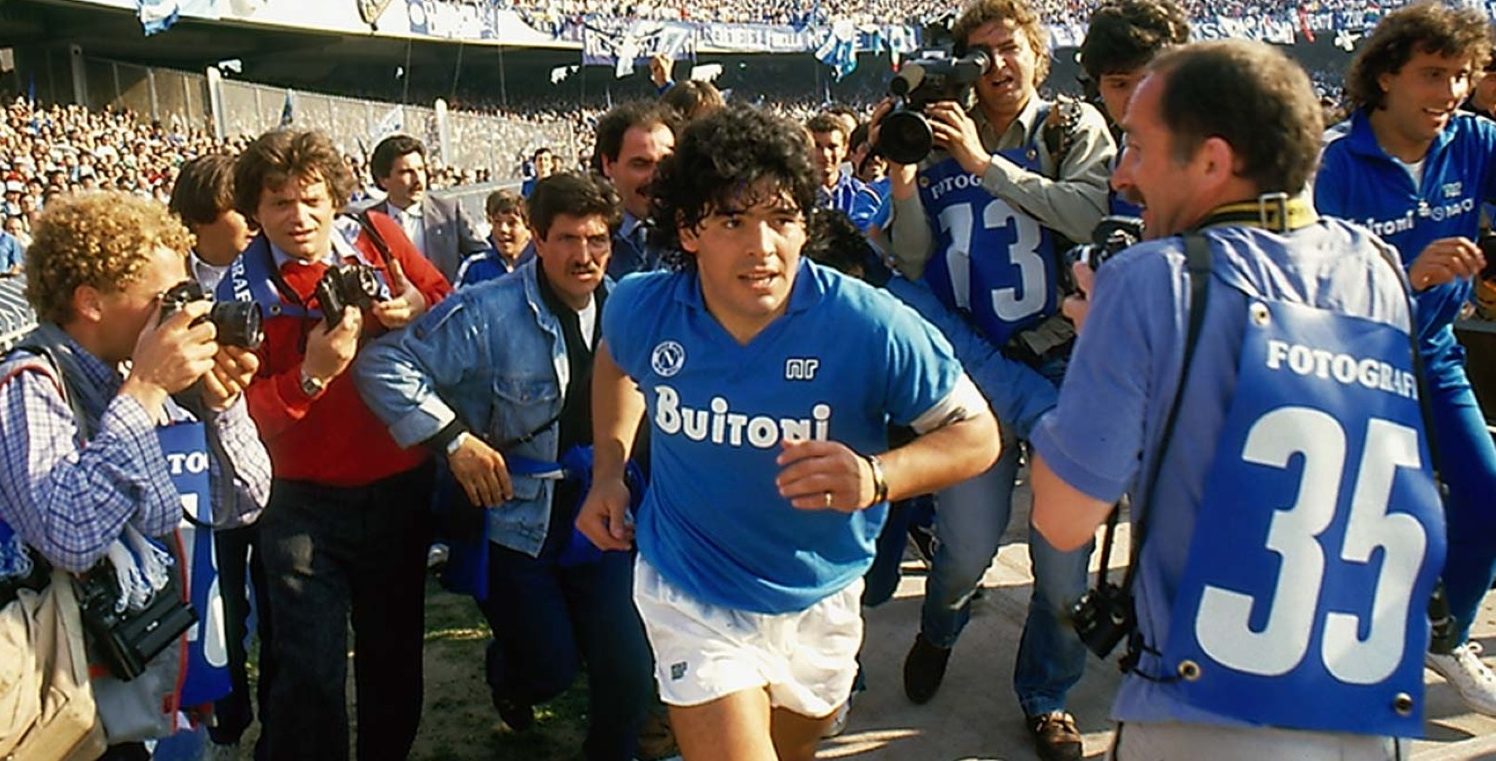 Diego Maradona, during his playing day with Napoli.
Top 10 soccer books to read while in self-isolation
2020-03-19
by
CanPL.ca Staff
News self-isolation help

No doubt that you’re probably experiencing a bit of cabin fever right about now.

The ongoing COVID-19 (coronavirus) pandemic has resulted in a virtual global lockdown, with people around the world self-isolating at home.

People are rightfully scared, but they’re also looking for things to do in order to pass the time – there’s only so many movies you can watch on-demand, and so many series you can stream on Netflix.

So, why not invest a little more of your time in polishing off a good book? If you’re a soccer fan, you’re in luck, because there are a lot of quality books out there that cover the sport from a variety of perspectives and angles.

Not sure where to start? Don’t worry, as the CanPL.ca team has you covered.

Each member of our editorial team provides a list of their personal recommendations below.

The Numbers Game: Why Everything You Know About Soccer Is Wrong (by Chris Anderson and David Sally)

I’m sure the data and models laid out in this stats-heavy book are outdated by now (I’m sure the CPL’s Oliver Gage could tell me), but in 2013 this was my introduction to the analytical side of the game. This book led me, for the first time, to the conclusion that football is incredibly random, and that skill can only take you so far.

“The Numbers Game” is also the singular reason why I will forever and always respect teams that choose to keep possession with a short corner kick rather than flinging it into the box. The topic sounds daunting, especially if (like me) you’re not mathematically inclined. It’s actually less heavy than you’d think, though, with plenty of good-natured humour and real-world examples to help illustrate every point.

It’s by no means a perfect look at the analytical side of soccer in 2020, but it serves as a solid entry point into looking at the beautiful game in a new way.

Ajax, The Dutch, The War: The Strange Tale of Soccer During Europe’s Darkest Hour (by Simon Kuper)

This is not a light nor a happy read, unfortunately, but it’s an important one. Simon Kuper (who will appear twice on this list) delves into the very complicated history of AFC Ajax during the Second World War: how, essentially, Amsterdam’s biggest club came to be known as the Netherlands’ “Jewish Club.”

It’s a fascinating account of how football really worked at the height of the War in continental Europe, as well as how the choices certain clubs made came to influence their successes and failures over the many successive decades.

This book is a nuanced look at the Dutch reaction to the War; it doesn’t take sides, as it both damns and praises Ajax en route to concluding that, obviously, war is complicated. The Guardian‘s review asserts that “there was in fact a surprising amount of football played while titanic battles were raging elsewhere,” and that may be the most incredible part.

I refuse to apologize for doubling up on this title. This is the greatest soccer book of all time, and it’s an absolute must-read for anybody who’s ever found themselves, as Hornby writes, “drifting off, in the middle of a working day or a film or a conversation, towards a left-foot volley into a top right-hand corner ten or fifteen or twenty-five years ago.”

“Fever Pitch” is poignant at times, emotional at others, and quite often hilarious. It’s my opinion that everyone who reads this book will either see some of themselves in its narrator, or else awaken a greater passion for the game (for me it was both). No author has ever captured so perfectly what it’s like to be a fanatic for any team, in any sport, anywhere in the world.

The only condemnation I have of this book is the ease with which it makes me root for Arsenal while reading.

Soccernomics: Why England Loses, Why Spain, Germany, and Brazil Win, and Why the U.S., Japan, Australia – and Even Iraq – Are Destined to Become the Kings of the World’s Most Popular Sport (by Simon Kuper)

An important book for any adolescent growing up with soccer, “Soccernomics” challenged the way I thought of the game. Released in 2009 and revised in 2018, this book is one of the first implementations of well-thought-out analytics in a sport that, at the time, we were told did not translate with mathematics and graphs.

Simon Kuper, perhaps inadvertently, gave the Canadian soccer supporter hope with a prediction for American and Australian triumphs in the world’s most popular sport due to several key economic factors. Now we’ve seen the sport grow exponentially in North America, perhaps it’s worth a revisit to see how things translated?

Oh, and the explanation of Edwin van der Sar’s three penalty saves against Chelsea in the 2008 Champions League Final – and why he pointed to that corner – is one of my favourite collections of pages I have ever read.

Inverting The Pyramid: The History of Soccer Tactics (by Jonathan Wilson)

For those unfamiliar, “Inverting The Pyramid” takes a look at football tactics and formations through the ages, guiding readers from the 2-3-5, to the W-M, to the more modern 4-2-3-1.

You feel bewilderment as new systems find exploits in old ones, and how some systems (Watford’s 4-4-2 of the 1980s) bucked trends at the right times.

What’s most intriguing – and what Wilson captures so well – is how each country developed styles from oddly personal stories. Take Catenaccio, Italian for “chain”, a defence-first style of play that is now synonymous with Italian football. Inter Milan coach Helenio Herrera’s back-four with a sweeper and advancing fullbacks, which resulted in numerous Serie A titles and European Cups, forced every team in Italy to rush in order to keep up, thus leaving principles of defensive study that remain there today.

The Fix: Soccer and Organized Crime (by Declan Hill)

“The Fix” is a must-read for all soccer fans.

The lengths Declan Hill goes to show just how deep match-fixing runs in world football is shiver-inducing. He shows you how far some players were willing to go (and why they needed to), showing how match-fixing industry is incredibly complicated.

I finished this a year ago, well after the ripple effects of Hill’s book were felt way beyond the band of Asian crooks he followed. It’s an important document and one worth visiting if you haven’t yet.

The Miracle of Castel di Sangro: A Tale of Passion and Folly in the Heart of Italy (by Joe McGinniss)

In the mid-1990s, Joe McGinniss travelled to the village of Castel di Sangro in central Italy, whose soccer club had just won promotion to Serie B (Italy’s second division) for the first time. McGinniss’ plan was to embed himself with the team for its historic season in Serie B, and write about whether or not the club would avoid relegation or drop back down to Italy’s third-tier.

McGinniss ended up getting much more than he bargained for, encountering a diverse and interesting cast of characters at the club, including a fly-by-the-seat-of-his pants coach and an owner who was once described by the New York Times as “straight out of a Mario Puzo novel.”

He travels with the team to gritty towns and cities you won’t find in any Italian tourist guidebook, while also becoming close with some of the players and the folks from the village. It’s clear that McGinniss becomes very fond of the people he is writing about, but there’s a twist in the tale at the very end, and the American author ends up feeling betrayed. I won’t spoil it for you, but needless to say this is a gripping story – one that McGinniss tells with great insight.

The Story of the World Cup (by Brian Glanville)

The venerable Brian Glanville is, perhaps, the most respected soccer journalist of all time, having written for such outstanding publications as World Soccer magazine, and serving as a football correspondent for The Sunday Times newspaper for close to three decades. The 88-year-old Englishman is also the author of many fine books, including “The Story of The World Cup” which stands as THE definitive history of the greatest sporting event on the planet.

Glanville charts the growth of the World Cup from the inaugural tournament held in 1930 in Uruguay through to the modern age with painstaking detail. Along the way, he tells many great behind-the-scenes stories about the players, managers and officials who helped shape the World Cup into what it is today.

First published in 1993, Glanville’s book is re-released every four years with an update that looks ahead to that summer’s World Cup.

Forza Italia: A Journey in Search of Italy and Its Football (by Paddy Agnew)

Paddy Agnew is an Irish journalist who moved to Italy in 1986. Since then, he’s been the Rome-based correspondent for World Soccer magazine, and he is considered one of the leading English-speaking experts on the game in Italy.

But don’t buy a copy of this book if you’re expecting a comprehensive history of calcio – the Italian word for soccer – or of Serie A. Instead, this is a story of Agnew’s trials and tribulations in Italy. Agnew’s Italian adventure is a fascinating tale, one he re-tells with great humor and charm in “Forza Italia.”

Though soccer is the book’s premise, it reads more like Peter Mayle’s “A Year in Provence,” intertwining stories of Maradona and Juventus with his own personal reflections on Italian life and society. Thoughtful and poignant, “Forza Italia” is Agnew’s personal survey of a country where football rivals Catholicism as the main faith, told from the unique perspective of an adopted Roman.

Maradona: The Hand of God (by Jimmy Burns)

Once the most famous athlete on the planet, Diego Maradona has been the subject of countless books over the years, but Jimmy Burns’ in-depth survey of the Argentine ace is easily the best.

Originally published in 1996, “The Hand of God” provides the inside story on the rise of and fall of Maradona. From his childhood and upbringing in Villa Fiorito, a shantytown on the southern outskirts of Buenos Aires, to winning the World Cup with Argentina and his eventual fall from grace after a life of drug abuse and hedonistic excess caught up with him.

This is an unflinching biography of the man they called El Pibe de Oro (The Golden Boy), expertly told by Burns who gained unprecedented access to Maradona’s inner circle of confidants. The result is an honest, balanced and at times uncomfortable read about one of the sport’s greatest players and icons.

While you’re at it, you should also check out “Barca: A People’s Passion,” another outstanding book by Jimmy Burns.