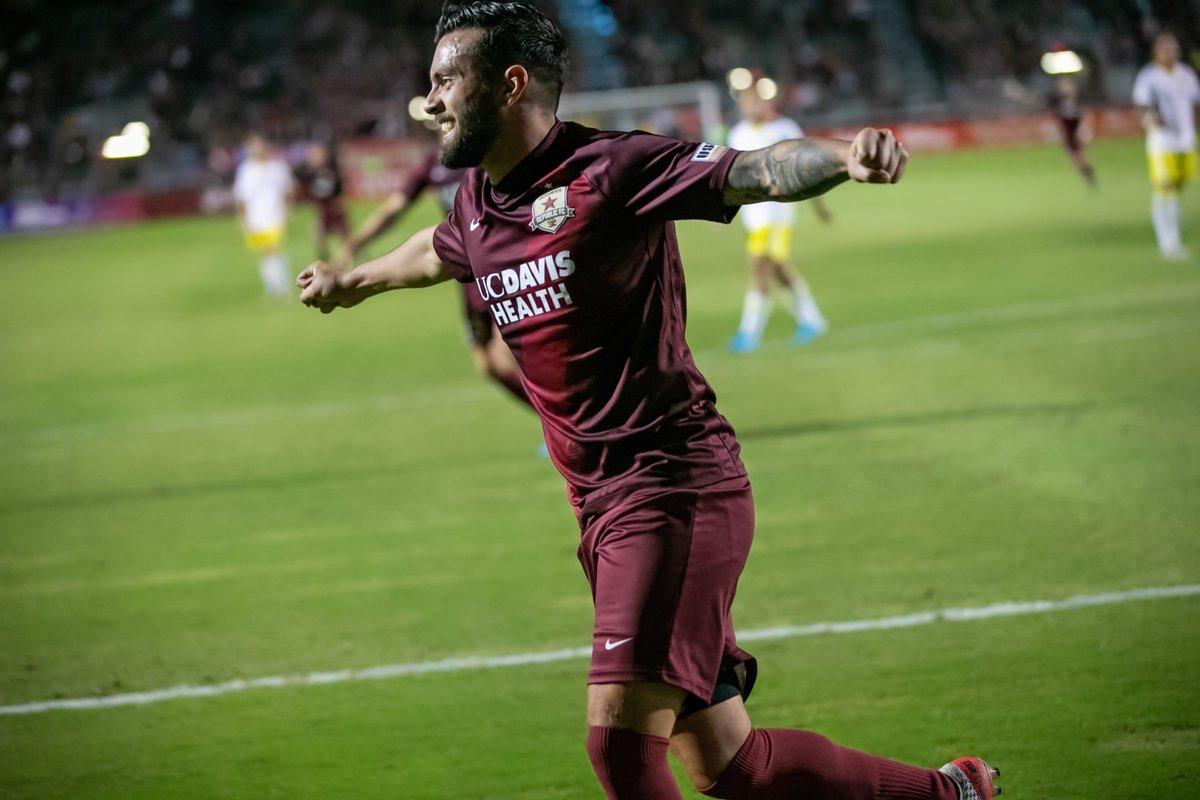 Alemán officially signed with FC Edmonton on Tuesday in a move that means the creative midfielder, who was once considered among the brightest prospects in Canadian soccer, will be playing professionally in Canada for the first time in his career.

Born in Costa Rica, Alemán moved to Brampton, Ont., as a kid and became a member of the Toronto FC Academy. Eventually, he moved to Spain as a teenager and joined the youth setup at Real Valladolid.

Playing stints in Costa Rica with C.S. Herediano, Belén F.C. and Deportivo Saprissa followed, as did national team call-ups – he earned four caps for Canada, with his last appearance coming in 2017.

He moved closer to home when he signed with Sacramento Republic FC, scoring three goals in 40 appearances over the last two seasons in the USL. But when FC Edmonton coach Jeff Paulus gave his agent a call last year, Alemán started to think about coming home.

Now 25, Alemán chatted with CanPL.ca over the phone from Costa Rica (he’s looking after his grandmother during the current COVID-19 crisis) about his decision to join the Eddies, what he hopes to gain from this move to the CPL, and what he learned during his playing days abroad.

How did the deal with FC Edmonton come about?

Keven Alemán: From last year when I was in Sacramento, I wasn’t playing much in the first half of the season because I had shoulder surgery and I was coming back from that. Jeff got in touch with my agent and he asked if I’d be able to get a loan to Edmonton for the rest of the season. I spoke to Sacramento to see if we could make that happen, but they didn’t let me. So, we always had that communication between Edmonton and my agent since the middle of last year, and we always kept it going, just going back and forth this whole off-season up until now.

Did you have other options? Were there any other teams in the mix that you were considering?

KA: There were other teams interested in me, one first-division team here in Costa Rica that was ready to sign me, but I just told them I was more interested in dealing with Edmonton because I want to be closer to the (Canadian) national team and there are other things I want for the future. We did have talks with other clubs, but nothing concrete – the only team that was really interested was the team here in Costa Rica. Some USL teams were interested, but I didn’t want to go back to the USL.

What’s your impression of Jeff Paulus?

KA: I think he’s a good guy. I spoke to him for the first time (on Sunday) and he told me about his plans for the season and his playing system, and I’m genuinely excited for this season. We’re both on the same page in terms of what I want and what’s coming for my future.

Did he talk to you about how he sees you fitting into the system at FC Edmonton or how he plans to use you?

KA: We didn’t talk about what he expects from me because I think that was just understood. From my part, I know why they brought me in and what they expect from me. I think it’s to make big things happen on the field, to be a leader on and off the field, and I’m very excited to have them put that trust in me.

How much did you follow the CPL before signing with Edmonton?

KA: I followed it quite a bit. I have a bunch of friends who play in the league. I spoke to guys like Manny Aparicio (of York9 FC) and others who told me about the league, and they said it was a good level. They said at first they didn’t think it would be a good level going into the first year, so they told me not to worry about the level of it because it’s going to do me good.

Was part of your decision to join FC Edmonton driven by a desire to earn a recall with the Canadian national team?

KA: For sure. I think I have the qualities to be on the national team, and I think I’ve got away from that since I’ve been in the USL. When I was playing for Saprissa I was getting called up, so all of this got lost when I came to the USL. At the time, I thought it was going to do me some good because I was going to get more playing time, and I would be closer to home, and maybe an MLS team would come in for me. But now after being in the USL, I realized that MLS teams and the national teams don’t really look at USL players, even if you’re doing good.

I had some great games at Sacramento and near the end of the 2019 season I was at my best level in a while, and that got overlooked because I was playing in the USL. So, it was either I was going to come back to Costa Rica to play or come home to Canada so I could be closer to the national team and they can see me perform. Coming into Edmonton is going to help bring that dream back of being on the national team. That’s my number one goal for this season, apart from winning a championship with FC Edmonton. Those are my two goals.

You’ve spent your entire pro career playing abroad, either in Europe, Costa Rica and the United States. Your signing with FC Edmonton means that you’ll be playing pro soccer for the first time in Canada.

KA: Yeah, funny how that’s worked out, huh? [laughs] I’m happy; believe me, I’m very happy coming into Edmonton. I think it’s going to be a jumpstart for my career after my experiences in the USL. I lost everything that was going good for me when I went to Sacramento, so I think coming into the CPL is going to do me a lot of good.

What were your experiences playing in Costa Rica like?

KA: They were great. I learned from so many great players in Costa Rica. From playing in Concacaf competitions, playing in finals, and knowing what that was like, it was a great experience for me. I take a lot from time down here.

What about Sacramento? It sounds like you just thought it was time to move on.

When you were just starting out in your career, there wasn’t a Canadian professional league, and now the country has domestic division with eight teams from coast-to-coast. With that in mind, how important do you think the CPL is in terms of the development of Canadian players?

KA: This is a big, big step for Canadian soccer. We should have did this a long, long time ago. This is only going to benefit the national team, this is going to make kids want to play soccer – they can dream about being in a league here in Canada. We’re going to be able to compete with big nations in the future.