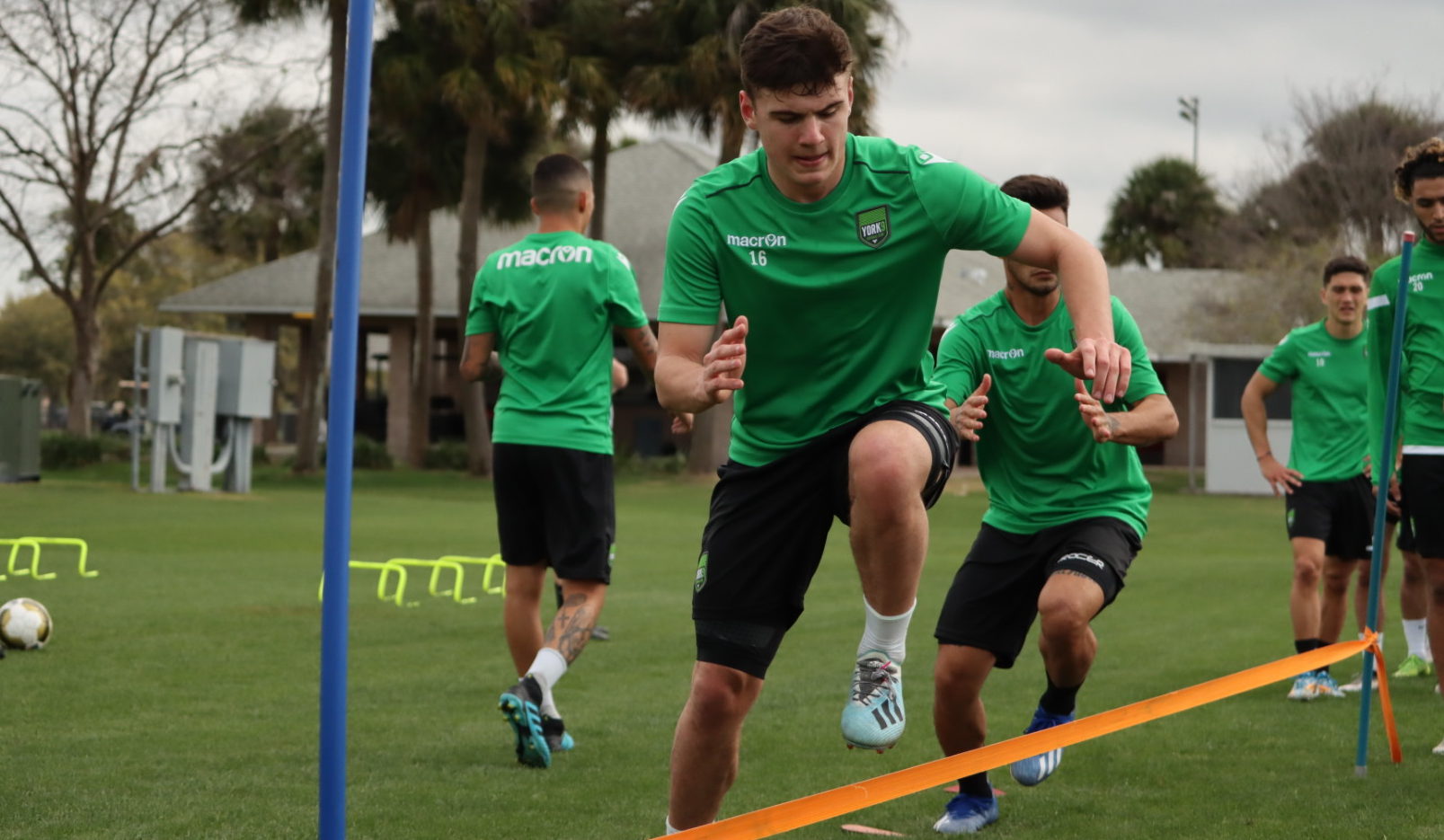 YORK REGION – Even though he is a new signing, Max Ferrari is a familiar face to a couple of his York9 FC teammates.

The 19-year-old spent the last two-plus seasons in League1 Ontario with Aurora FC, the club Y9 coach Jim Brennan used to manage and where Morey Doner cut his teeth before joining the Nine Stripes for the 2019 CPL campaign.

“Me being at Aurora, my three kids play in Aurora, so I’ve known Max for a long time, and you can see he’s got something. He’s progressed very well,” Brennan told CanPL.ca.

“Now it’s up to us to fine tune him and make him a better player: getting him into a professional environment, training every day, working with older, experienced players. He’s got a bright future.”

Though born in Toronto, Ferrari, raised in Newmarket, Ontario, is York Region-made.

“Honestly, this is the best thing that could have happened: representing my hometown and playing under a coach I’ve known since I was seven years old,” Ferrari said about Brennan.

“He had his own camps, called the Jimmy Brennan Eleven camps, when he was with Toronto FC. I met him there. He’s also a Newmarket guy, so I knew him through that, and he was also a coach at Aurora when I was in the youth system.”

Ferrari made 15 appearances for Aurora last season, accumulating close to 1,200 minutes of playing time in League1 Ontario. Brennan feels he is getting an exciting and young winger who is ready to make the jump to the CPL.

“When you watch Max, he’s two-footed, can play on the left, play on the right. He’s got lots of energy, he loves to take players on, and, for me, the biggest thing was his work ethic,” Brennan stated. “He’s got good balance, reads the game, and we’re here to help him improve those little bits of his game that need to get better.

“We’re happy that we got him. And him being a local kid, out of Aurora, it’s a great one for the community.”

Ferrari was out on the soccer pitch as soon as he was able to, first playing the game at the Newmarket Soccer Club when he was “about three years old, four years old.”

Capable on both flanks – and sometimes in the middle, “if he has to” – Ferrari relishes how pivotal a role that wide players have in the modern game.

“My job is to create and to score goals, but also helping my team defend,” Ferrari said. “Keeping my work rate up is a big part of my game.”

He later added: “The wing is a big role for both the offence and defence: tracking back for my fullbacks or crossing into my striker or playing it inside to my midfielder and running outside. The winger is huge for creating the play and also ending the play. It’s an influential role.”

Having dreamed of going pro for as long as he could remember, Ferrari credits his time in League1 Ontario as preparing him for this next challenge.

“It was a big step for me,” Ferrari stated. “I got called up when I was 16-turning-17, played about five games. Then I had my first season when I was 17-turning-18, which was good. I was a regular starter and I got a lot of time on a decent team – we were good – and a lot of guys helped me, especially Morey Doner, my captain. (He played) a big leadership role to me, helped me along the way.

“And then last year I had my second full year of League1. The coaching staff of Mike Aquino, my coach from Humber and Aurora, helped me a lot. Developing maturity on field, knowing when to run, knowing when to do what and helping my fitness along the way.”

For his part, Doner has been enjoying the reunion with his former Aurora teammate.

“We played together for almost two years. He was one of the guys that caught my eye when I went there. He’s got his head on his shoulders, always wants to work hard,” Doner explained. “I went to watch a few games of his last year and seeing him get to that next level was something that I really wanted.”

Ferrari hopes to follow in Doner’s footsteps come 2020: “He wasn’t a starter at the start (of the 2019 season), then he showed his quality and became a really good player in the league.”

The teenager experienced the whirlwind demands of the game last November with an invite to the CPL U-21 Showcase Match to represent Team Ontario against Team Quebec in Laval. His Humber Hawks were in the middle of the CCAA National Championship in Oshawa, Ontario, adding a wrinkle to his plans.

“In the middle of the Humber College season, I got invited about a month before the showcase,” Ferrari recalled. “We had about two or three practices a week, we were building up, building up, and then the showcase landed on the same weekend as my national championships.

“So, I played the quarterfinal the Wednesday, then the semifinal the Thursday and then, since we lost the semifinal, I bused the Friday night to Montreal and then played the Saturday. It was a lot of soccer, but I thought I showed myself.”

As for what’s ahead for Ferrari, making the leap to the professional ranks is never easy, but Brennan did not sign the teenager just to fill a roster spot.

“It’s a clean slate, beginning of season, you go show what you’ve got. If you’re ready to start, you’ll start,” Brennan explained. “I don’t care what the age is, as long as you get out there, show what you’ve got and compete and push yourself and work for the team, you’ll have an opportunity to play.

“Squad player? Depth player? No. We’ve signed you because we believe in your talent, believe that you belong in this this squad. And if you’re ready, you’re ready.”