You’re in luck, because now you’re able to relive Valour FC’s win over Pacific FC on May 1, 2019 (the first regular season road victory by any team in Canadian Premier League history) with a brand new “Forever First” video.

“Forever First: First Away Win” was posted on the CPL’s YouTube and IGTV channels on Wednesday for all Canadian soccer fans to watch and enjoy.

The third match in the CPL’s short history was a close contest featuring plenty of scoring chances. Goals from Stephen Hoyle and Dylan Carreiro lifted Valour to a 2-1 win over Pacific at Westhills Stadium, marking the Winnipeg club’s first-ever victory.

The game was an all-out, end-to-end affair with 33 shots total (19 for Pacific, 14 for Valour), with the Winnipeg side having made the best of their opportunities after the full-time whistle sounded.

Hoyle etched his name in his club’s history books in the 23rd minute, firing home Valour’s first goal straight down the middle of the net after Pacific FC goalkeeper Mark Village was drawn away from the six-yard box. The striker had a productive night at Westhills Stadium, firing four shots and registering a key pass en route to winning man of the match honours.

Jose Hernandez equalized for Pacific in the 44th minute with a lifted header past Valour ‘keeper Tyson Farago, sending the nearby supporters section into a frenzy.

The second half saw Pacific draw close to taking the lead from free kicks. Both Ben Fisk and Terran Campbell fizzed curling efforts just past the post.

Winnipeg native Carreiro, who came on as a second-half substitute, gave his hometown club the victory in the 78th minute with a powerful, deflected strike from outside the box that looped over Village, and sealing the first road win in CPL history.

Watch “Forever First: First Away Win” by clicking on the video player at the top of this page, or by subscribing to the CPL’s YouTube and IGTV channels 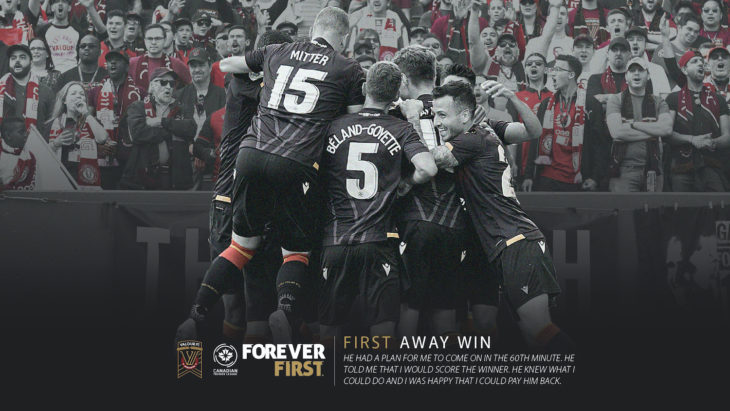