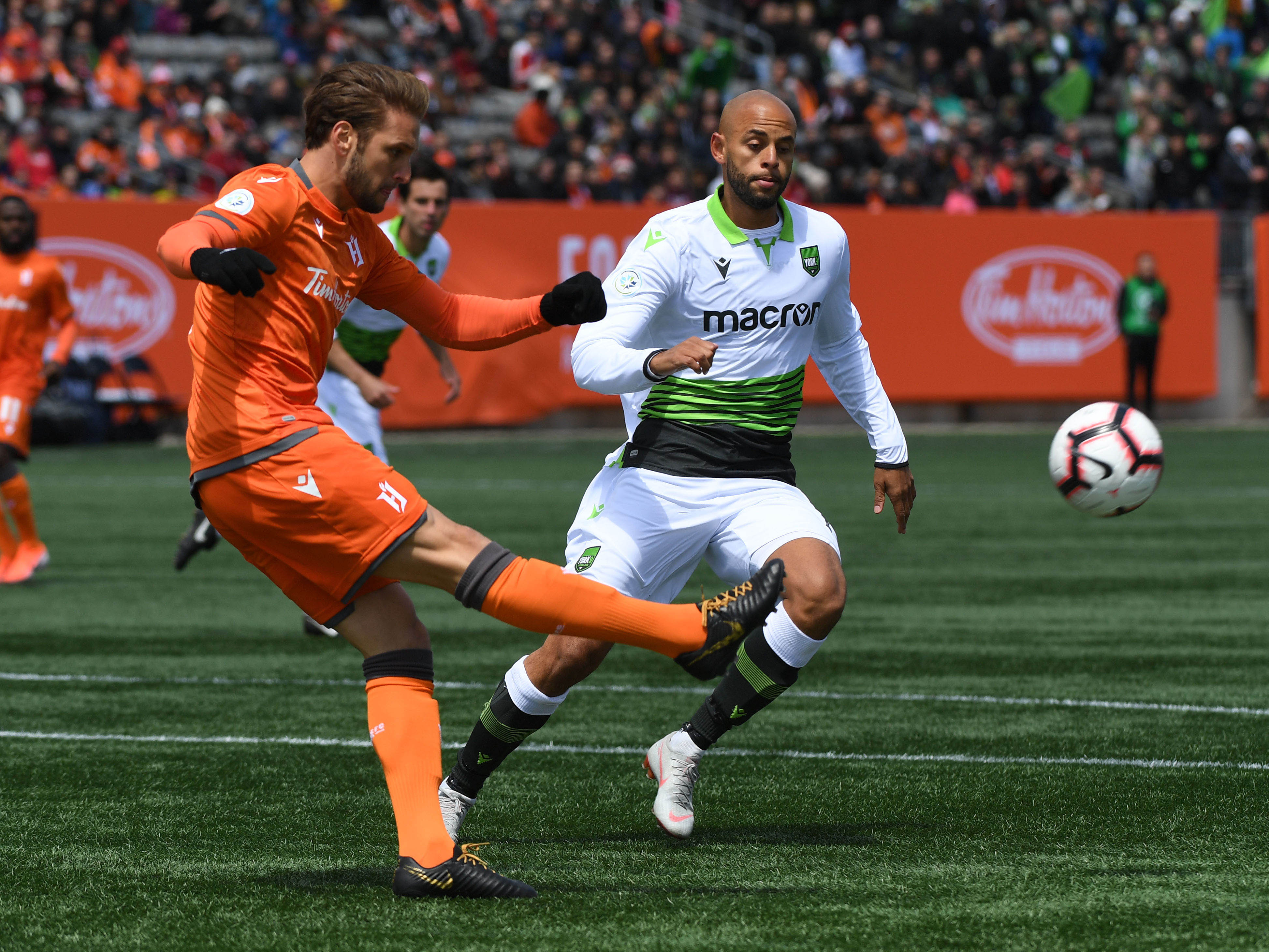 Where were you exactly one year ago today?

Were you among the announced crowd of 17,611 fans inside Hamilton’s Tim Hortons Field on that sunny and crisp afternoon as the Canadian Premier League officially kicked off?

Or were you sitting on the couch in your home, tuning in to the OneSoccer and CBC broadcasts of the CPL’s inaugural game between Forge FC and York9 FC?

Where ever you might have been, there’s no doubting that April 27, 2019 lives on as one of the most important days in Canadian soccer history.

With this in mind, CanPL.ca is celebrating the one-year anniversary of the CPL’s inaugural game, taking a stroll down memory lane with a recap of the website’s extensive coverage from that historic day.

Check out all of the stories we published one year ago today, which tell the tale of the entertaining 1-1 draw between Forge FC and York9 FC in the Canadian Premier League’s curtain raiser.

On a day of history in Canadian soccer, Forge FC and York9 FC walk away with a point each to mark the occasion.

There were many firsts in this match, with York9 FC striker Ryan Telfer scoring just three minutes into the game to notch the first goal in Canadian Premier League history. Kadell Thomas subbed on for Chris Nanco in the second half and ripped one home to equalize for Forge.

In the end, it was an exciting beginning to a brand new league, and a great starting point for what will surely be a rivalry for years to come. The 905 Derby was born. || FULL STORY

Just as supporters, players and coaches at Tim Hortons Field revelled in the euphoric state induced by the initial ceremonies and pomp surrounding the first match in the Canadian Premier League’s history, it happened.

York9 captain Manny Aparicio cut Forge FC’s backline with a smart through pass, which Telfer wiggled through a sliding defender. That opened up a 1-v-1 opportunity with Forge goalkeeper Triston Henry. Telfer wouldn’t miss his mark.

Unfortunately for the diminutive Argentine-Canadian attacker, the day was marred by a late repeat offence, which drew a second yellow card out of the pocket of referee Dave Gantar and, subsequently, the first red card in CPL history.

While it’s not the moment Aparicio was probably dreaming of, history is still history, right? || FULL STORY

Forge coach Bobby Smryniotis was in a reflective mood when speaking to reporters after the game.

“A great festival for the game; a great starting point for what we’re going to build for the future. We were entertained as coaches and players and I think the crowd was… that’s the most important thing.

“We always want the three points, but we’ve got to show that Canadians can really play this game. We showed that.” || FULL STORY

‘We’ve done our job’: York9 all smiles after playing spoilers in Hamilton

There was absolutely no love lost between York9 FC and Forge FC, who wasted no time in introducing fans to a true Canadian Premier League rivalry in their inaugural meeting.

“It was a true derby game,” York9 boss Jimmy Brennan said. “Once that whistle blew, we knew the game was on.” || FULL STORY

Brennan refrains from weighing in on Bekker, Di Chiara incident

The incident, which occurred in the 63rd minute of the Canadian Premier League’s inaugural match at Tim Hortons Field, saw Bekker and Di Chiara come together on the touchline, drawing the ire of the York9 bench.

And, while the collision was met only with a warning and a continuation of play, Brennan couldn’t avoid the talking point in the post-match press conference. || FULL STORY

You’d be forgiven if the name Kadell Thomas doesn’t ring a bell. On a pitch that featured some of the more household names in all of the CPL, it was the 22-year-old Thomas who scored the 78th-minute equalizer to send the home fans off with a smile. || FULL STORY

Match highlights from the inaugural game

Were you unable to be in attendance at Tim Hortons Field or watch the game live on OneSoccer or CBC? No problem! Here’s your chance to watch a video highlight package of how the match unfolded.