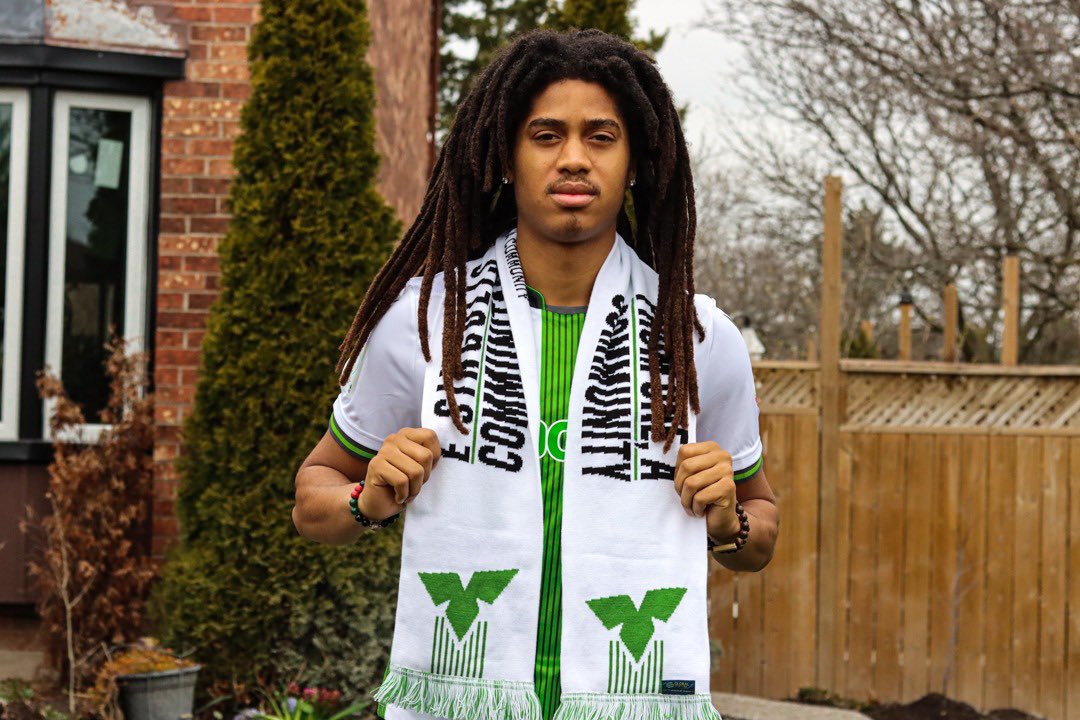 Ijah Halley.
CPL rookie Ijah Halley: ‘I just can’t wait to get this going with York9 and be part of this experience’
2020-05-21
by
John Molinaro, Director of Content (@JohnMolinaro)
News

Ijay Halley is not your typical Canadian Premier League rookie – the current COVID-19 pandemic has made sure of that.

Halley had been on Y9’s radar ever since they saw him play for a TFC academy team in a youth tournament two years ago. The Nine Stripes were impressed with the youngster’s versatility and ability to play a number of positions, and needing to fill an under-21 spot on their roster, they reached out to Halley’s agent this off-season to make the prospect an offer to come play in the CPL.

The deal all came together very quickly during the current period of self-isolation. Halley wasn’t part of York9’s pre-season training camp in Florida in March that was shut down due to the pandemic, and because of the COVID-19 protocols in place, Halley hasn’t even had a chance to practice with York9.

Instead of getting to know his new teammates (many of whom he hasn’t even spoke with) and training with them, Halley has been limited to doing at-home workouts assigned to him by the club. But that hasn’t dimmed his enthusiasm as he looks ahead to when he’ll finally be able to make his professional debut.

“To play in the CPL, a growing league, I just can’t wait to get this going with York9 and be part of this experience,” Halley told CanPL.ca.

For now, Halley has to bide his time, and make the best of a situation that wouldn’t be ideal for a veteran player, never mind a young rookie who is anxious to cut his teeth in the professional ranks.

“It’s something that’s caught me off-guard, but you have to be positive while being safe at home. When we’re cleared to play, we’ll get to it,” Halley stated.

Even though he hasn’t met his teammates in person, Halley has managed to connect with a few of them via team Zoom sessions.

“Doing the daily workouts assigned to us are at the top of the priority list. I’m trying to meet the boys and build up some rapport without seeing each other face-to-face; taking the best out of the situation, that’s all I can do,” Halley said.

Not being able to connect in person with his new teammates has made life somewhat difficult for Halley. But he insists he feels as though he’s a part of the team, even with all of the social distancing measures in place.

“It’s been difficult, but the boys and staff have been welcoming, and they’re happy I’m aboard. Some players have reached out to congratulate me (on signing with Y9). With an open-armed welcome, it’s made it easier to be on my own,” Halley offered.

When the 2020 CPL season does kick off, Halley faces serious competition for playing time at York9. Although he can play on either flank, Halley is expected to be used on the right side, either as a winger or wingback, by coach Jimmy Brennan.

The problem for Halley, though, is that Morey Doner made 25 appearances for York9 in their inaugural CPL campaign in 2019, forming a formidable fullback combination with Diyaeddine Abzi

Doner, 26, was key starter last season, helping Y9 finish third in the overall table. Management rewarded Doner last month by inking the right fullback to a contract extension that will keep him at York Lions Stadium until the end of 2021 CPL season.

Halley isn’t bothered by the competition, though.

“We’re a team, so it’s not like I hope he doesn’t do well so I can get a chance. Every team needs friendly competition at positions to make an impact. That’s what all good teams have, and what they need. There’s always going to be competition for spots, but I’m not focused on that. I just want to show Jimmy what I can do on the field and what he can expect from me,” Haley stated.