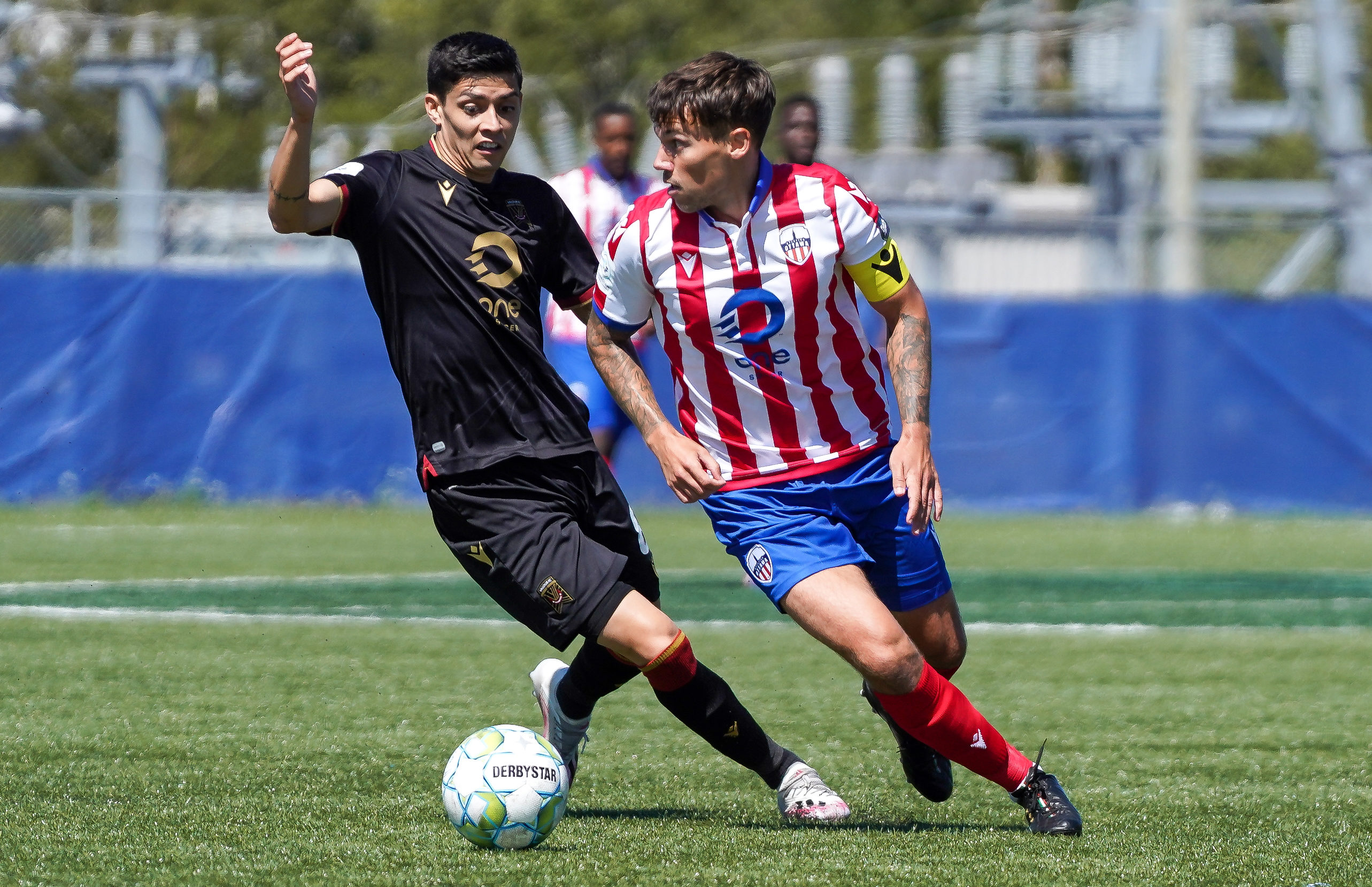 Did Atlético Ottawa experience the strangest club launch of all-time in world soccer?

We ask this after the Club de Atlético Madrid-owned team played its first CPL match on the red banks of Prince Edward Island at The Island Games.

With no exhibition games and a far-from-typical pre-season due to the COVID-19 pandemic, Ottawa played their historic first CPL match with no fans in attendance, no roar from the terraces… nothing.

It was a rare sight, no doubt, when Atlético Ottawa took on York9 at UPEI’s campus on Aug. 15, and it was a strange feeling for the players on the pitch who made league history.

“It’s been challenging, not going to lie, we’ve found it difficult,” club CEO Fernando Lopez told CanPL.ca. “Not just for me, everyone at the club has found it strange.”

Ottawa impressed in that first match, taking a two-goal lead before a Vashon Neufville red card paved the way for a Y9 comeback and a 2-2 final result. Atlético floundered in the aftermath, losing 4-0 to Valour FC, and collapsing in injury time to split points with FC Edmonton, though Francisco Acuña’s brace was a significant bright spot.

The club earned its first win with a 2-0 decision over Cavalry FC, before being shut out by Forge FC this past weekend.

Lopez had just finished watching the Valour game – Ottawa’s first in Atleti’s iconic red-and-white strip – when he spoke to CanPL.ca. Coach Mista expressed his frustration after that heavy defeat, stating his players didn’t properly represent the red and white stripes.

“It took us a few days to recover from that loss. These players have only played three times together. This happens to even the best of teams. Look at Barcelona versus Bayern – they lost 8-2,” Lopez said of the recent UEFA Champions League semifinal.

“All I have to say is the guys have made a tremendous effort, the coaches as well. Gotta give them credit for that. When we have 11 players, we are competitive.”

While there have been disappointing results to swallow, Ottawa captain Ben Fisk opted to harken back to their first bus trip back to their Charlottetown bubble following the game vs. Y9. Fisk and his teammates saw photos of a socially-distanced viewing party at TD Place, Ottawa’s would-be home stadium, as fans enjoyed the historic inaugural match.

“Getting on the bus after the game, I got sent a photo of a person in a Fisk jersey at TD Place,” Fisk told CanPL.ca. “As a player, you come back from 90 minutes of serious hard work being down a man for 40 minutes and all that… seeing everyone there was unbelievable, as a player, there’s nothing like it.”

It’s easy to get lost in the dissonance of the bubble, a brand new city, and a brand new team. Lopez knows that quite well, adding the club has been going “above and beyond” to keep fans in Ottawa engaged.

“It’s weird. One of the great things this game has is the fans. And we don’t have that – we’re 11 people right now,” Lopez stated.

“We’ve been keeping these watching parties all around Ottawa, socially distanced of course. We have “The Collective” as well, which has been very well received from our fans. Overall, the fans have shown their support well and it’s been fantastic.”

Fisk, meanwhile, has been reaching out to fans directly via social media: “We haven’t had a whole lot of opportunity to keep relationships with them, so we try to keep in touch as best we can.”

Perhaps that strangeness has always been there for Atlético, a club that was launched in January after the Ottawa Fury folded, as they scrambled to assemble a squad for their debut season. A pre-season camp in Madrid was quickly scuttled, as players returned to Ottawa – many for the first time due the pandemic.

While you would think COVID-19 would give the club more time to prepare after the start of the season was delayed, consider this: How do you sign players during a pandemic? Lopez and his team faced that very issue.

“The reality is we added a third of the roster in (June),” Lopez said. “There was a lot of pressure for us; me as a first employee, coaches, players, because this is the first time we’ve played together.”

Back in Charlottetown, the Ottawa players has been getting some much-needed face time with one another.

“It’s been awesome – the best part about the bubble,” Fisk said. “A lot of ping pong, cards, PS4, sitting on the patio, having a coffee, getting to know each other for real.

“Not many teams have as many new faces as we do. Guys are just learning each other’s stories, which is fantastic.”

As the slog of The Island Games continues, and Atlético Ottawa attempts to qualify for the second round, you have to wonder if any success they achieve will feel strange for the players.

But as they get a chance to grow as a group, both on and off the pitch, Fisk said the passion of fans in Ottawa trumps any mental blocks about the club’s strange first few months of existence.

“We need to do our best for those people who have made this club possible and the fans that waited six months to see our debut,” Fisk said.

“The message to our players is that we enjoy it. Every game is a chance to be part of history. Take a deep breath and know what we’re capable of as a team.”