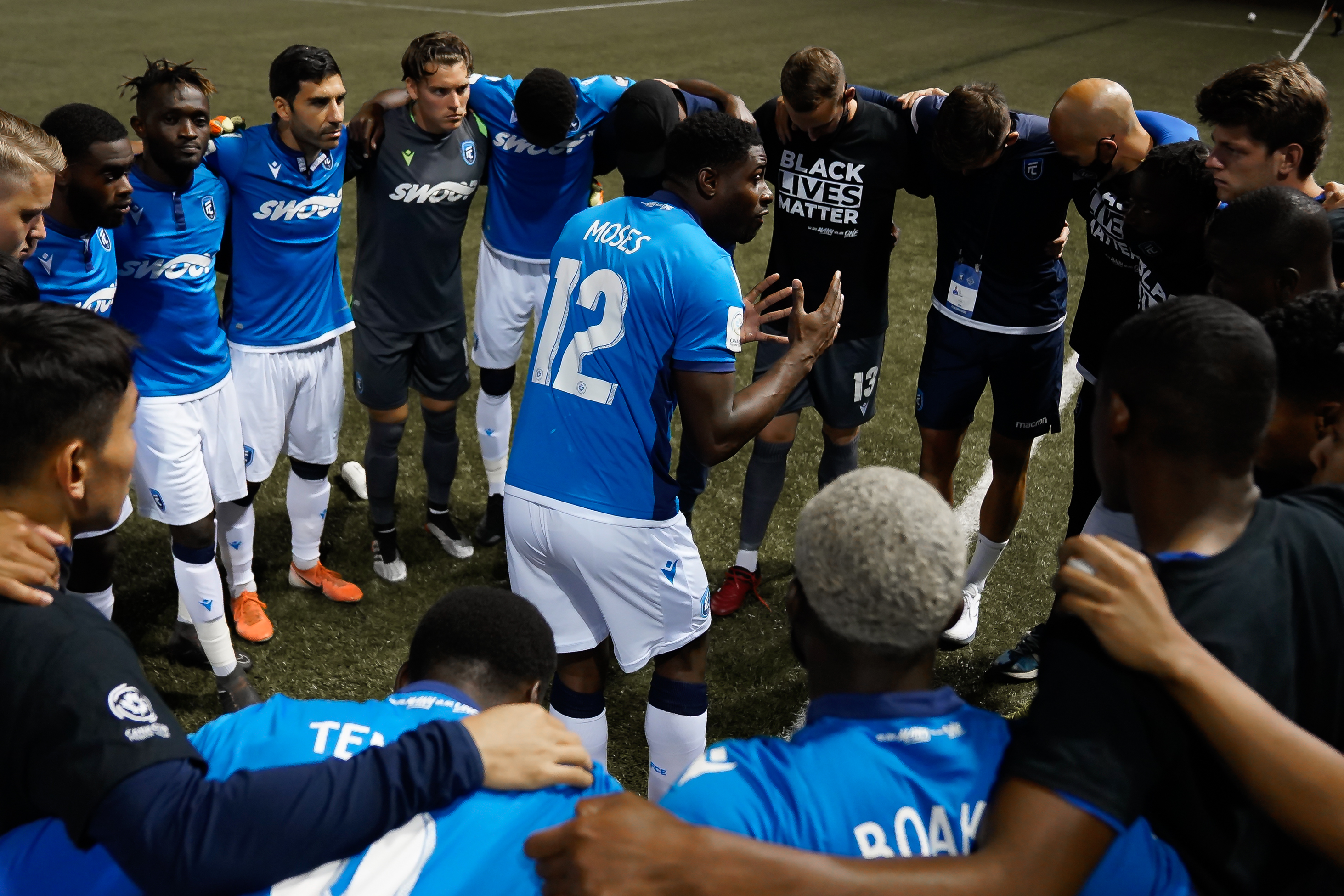 This off-season is shaping up to be a fascinating one for FC Edmonton.

The dust has barely settled on their Island Games exit, with the Eddies sent home early after losing six and drawing one of their seven games in PEI. Already, though, major changes are afoot: coach Jeff Paulus announced this week he’s handing over the reins, in hope that a more experienced first-team coach can get more out of the squad in 2021.

There’s a lot to be picked apart from the 2020 campaign; it seems that the incoming manager will have a solid foundation to build upon, but also plenty of work to do in addressing weaknesses.

Despite announcing his resignation just the day before, Paulus graciously sat down with CanPL.ca to break down FC Edmonton’s disappointing run at The Island Games, and offer his thoughts on the upcoming off-season.

The Eddies’ campaign started off in frustrating fashion; they fell 2-0 to eventual champions Forge FC, despite outshooting them (heavily in the first half). Paulus laments the chances his side missed, including an Allan Zebie missed shot within the six-yard box, plus shots off the post and crossbar.

It was Kwame Awuah’s “wonderstrike,” as Paulus put it, that gave Forge the edge that day.

RELATED READING: Paulus opens up on stepping down as FC Edmonton coach: ‘I feel very much at peace’

Edmonton also lost Amer Didic, the club’s defensive keystone, to injury in that first game, which took much of the bite out of their ability to play from the back and dominate in the air.

Paulus went through all seven games one-by-one, identifying the stretches in which his side played best — the second half of their comeback draw against Atlético Ottawa, for instance, and late in the contest against Valour FC where Tomi Ameobi barely missed an open shot to put FCE up 2-1, two minutes before Valour scored their winner.

“I don’t think we were a horrendous team. We’re not a one-point team at The Island Games. These players are not one-point players. The last thing I said to them is that I still believe in them, right now.” Paulus told CanPL.ca.

“You have to be a good team to create your own luck, and we were a bit unlucky. I guess that says something about, are we quite ready to be that good team yet, maybe not. But we were in almost every game we played.”

He added that, if the Eddies went back and played seven new games, he feels they could win three or four of them.

Still, there has to be a reason why Edmonton finished at the bottom of the table. Despite positive performances at times, the results never came. Paulus tried to identify the most glaring issues.

“It’s difficult to pinpoint why it went wrong, just missing that little bit. Maybe that bit more final third penetration, maybe a few more opportunities created inside the 18-yard box would be something I could address,” he indicated.

Edmonton did struggle to create for themselves, finishing last in the league in shots on target (16) and chances from open play (28) by significant margins. One issue stood out above the rest, though:

“Really, really poor management of set-pieces,” Paulus conceded. “Our set-pieces for us were horrendous, quite often we couldn’t even beat the first defender with the ball. We gave up really good opportunities by not taking advantage of set-pieces, with some of the players we have that will attack a ball in the air.

“And then on the flip side we defending very poorly on set-pieces, so that also created a big factor in the tournament. We worked on it, we knew it was gonna be a factor, and we let ourselves down there.”

The season is certainly a disappointment for the Eddies, whose revamped roster looked good on paper coming in. Losing Didic in the first game, and getting him back only for the final two, certainly hurt.

Star forward Easton Ongaro had a slow start, although he did finish with three goals, scoring on each of his shots on target. New additions Keven Alemán and Hanson Boakai had good moments as well, particularly in the phases of the Atlético Ottawa match where they seemed to take over entirely.

Above all, though, the valuable experience gained by youngsters is what should give Eddies fans hope for the future.

“I think I made a comment last year that I was gonna do a great job developing players for the next manager of this team,” Paulus quipped. “I guess that’s come true, because the next manager’s gonna get Chance Carter and Anthony Caceres and Marcus Velado-Tsegaye and Prince Amanda.

“One of the things I said when I came into this job is I was gonna try and do it with young Edmonton players, in particular those that have spent time in our academy. I’ve gone down fighting with the players I want to go into battle with.”

The challenge, now, will be avoiding a lull in the young players’ development over what’s likely to be a long off-season coming up. Many CPL coaches have spoken already about a need to find playing options for their players over the winter, whether that’s in friendly matches or loan opportunities to other clubs.

Paulus told reporters in his final press conference of The Island Games that FCE has struck a deal with a club in Germany (he won’t say which yet) to help find loan opportunities for the Eddies’ players. He provided a little more insight into that agreement; it’s not necessarily that a handful of Edmonton players will be loaned to the same club.

“A lot of teams in the English Premier League, they’ll have somebody on staff and it’s that person’s job to go and visit clubs, and see the setups of these different clubs, where they can then lend their players,” Paulus explained.

“And we just don’t have that luxury at our club that we have that individual that it’s their job to get loans for players in their club, to get training stints, trials. We don’t have that luxury, it’s often me trying to find 10 minutes of spare time to try and make this happen. So what we’ve created is someone there that can be that person for us, that can create these opportunities.”

The Eddies have created profiles for all their players, which will be sent out in hopes of securing loan deals. Paulus warned that it’ll be difficult to navigate this winter, with plenty of uncertainty due to the lingering COVID-19 situation (it’s important, of course, to have everyone available to play in next season, and not stuck overseas).

There’s a lot of work to be done at FC Edmonton this winter, even after the players finish training in late October.

Priority number one, though, might be finding the next coach.