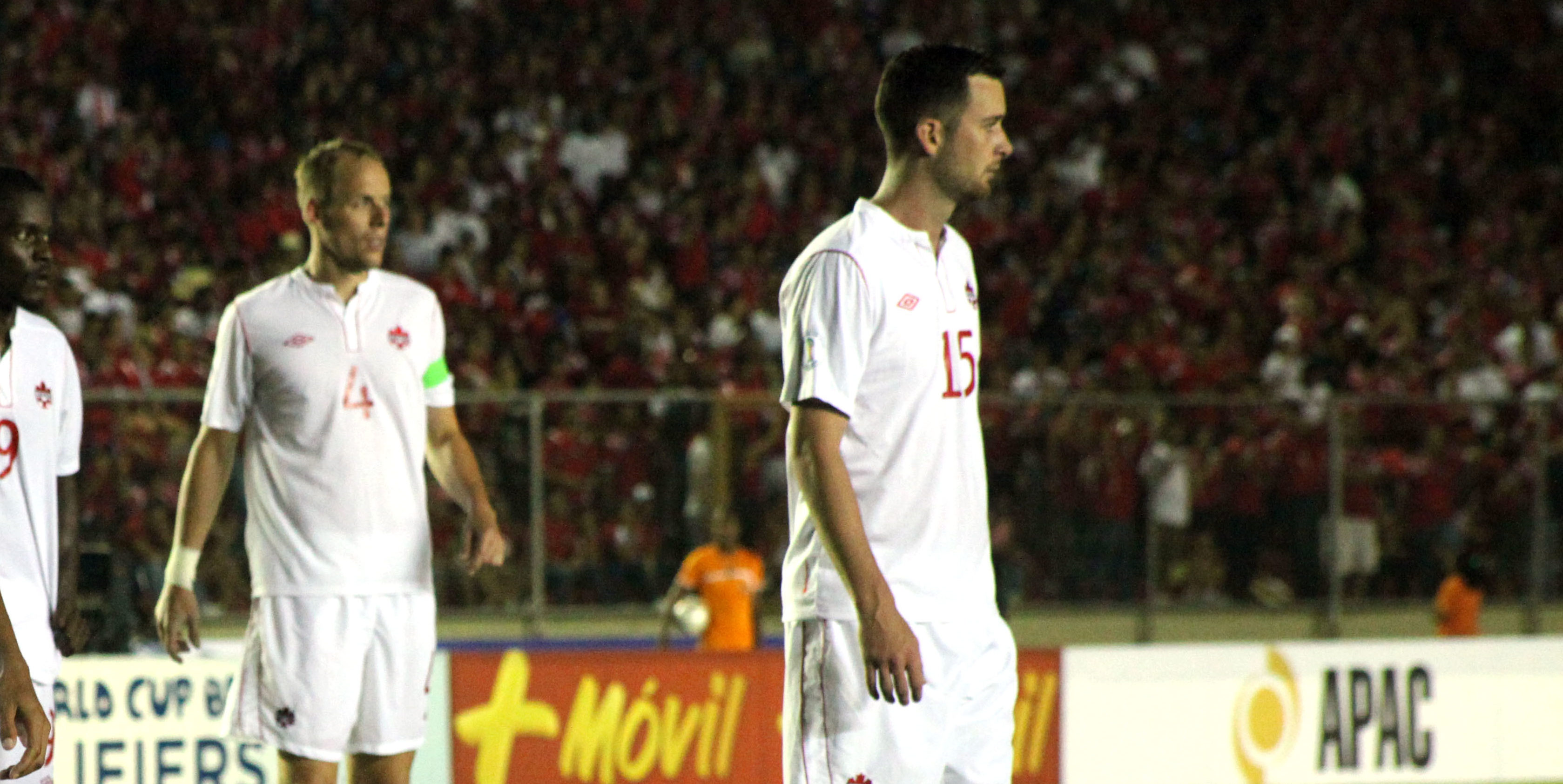 Stick around North American soccer long enough, and you’ll start to hear the name of its continental governing body used as a verb.

“We got Concacaf’d” is not an alien phrase to long-suffering Canadian fans who have watched its national teams suffer many heartbreaking results away from home at the hands of a Central American rivals. Why, though, is the term “Concacaf’d” (or rather, the concept) so notorious in soccer vernacular?

What exactly is it about travelling to play in Honduras, or El Salvador, or Panama that makes some Canadian players smirk, and others groan?

There’s a reason the Canadian men’s team’s record away from home in World Cup qualifiers isn’t so good.

No matter how many times you’ve done it, there’s a reason why Central America is synonymous with an all-around bad time for visiting footballers. When Forge FC have gone to such inhospitable theatres of football, they’ve followed in the footsteps of many Canadian players before them, with a vault of experiences that together build a hell of a reputation.

David Edgar and Kyle Bekker, along with a few other veterans of the Canadian men’s team, chatted with CanPL.ca to shed some light on what it’s really like to experience the full force of Concacaf.

To begin with, it’s important to understand how much football means to fans in Central American countries — from El Salvador, to Honduras, and so on.

Former goalkeeper Craig Forrest, with 56 caps for Canada and a member of the Canadian Sports Hall of Fame, echoed the sentiment.

“There’s just this feeling of a massive importance to the people that are there,” he explained. “It’s not like they’re going to a game for entertainment, they’re going there to help the team win. It’s really, really important to them, to a level that’s impossible to describe.”

In his travels with the Canadian men’s team, Forrest played in El Salvador, Honduras, Panama, Mexico, and Costa Rica — in some cases more than once. He backstopped Les Rouges in the toughest environments, and he has plenty of wisdom to impart to Forge players on playing in Concacaf.

“You have to expect the unexpected, because just about everything that could go wrong, could, and often does,” he warned. “From showing up at the stadium for your hour training session, having military there, having nobody there to open doors for you… From people honking horns at night (outside your hotel), police sirens all night to keep you up.

“It’s a f—ing different sport, almost. Everything from officiating to management to hotels to temperature to culture to weather, all of it.”

Of course, each of those comes with a story from the Canadian national team’s past. David Edgar recalled a trip to Panama, where the Panamanian FA tweeted out the Canadians’ hotel location the night before a World Cup Qualifier.

The result, obviously, was a street party lasting long into the night.

“It wasn’t even the noise, or the drums, or the fireworks that got me,” Edgar mused. “It was one person that just kept revving his motorcycle engine that got me.”

Bekker recalled a friendly match in Panama, where the Canadians’ bus was greeted at the stadium by scores of fans gesturing with a finger across their throats. Once these teams actually got into the stadium, it was even worse.

“I’ve been in that position where mentally, psychologically, it’s so intense, and it’s just coming at you in waves,” Forrest said. “Ball boys are passing the ball fast, then when you need to score you can’t find a ball boy to give you a ball.”

“(The fans) are normally there two, three hours before kickoff, 40,000 of them, and they’re swearing at you in Spanish,” recalled Iain Hume, who has 43 caps for Canada.

Hume played for Canada’s under-17 team in El Salvador, sequestered in a barracks-style dormitory at the age of 15 for several weeks in 1999. He’s seen it all in his national team career.

“I’ve learned these things over the years what they meant, and they’re not exactly the nicest things. But throwing bags of urine at you, throwing toilet roll at you all the time, and when you’re warming up if you’re anywhere near them they’re hurling abuse at you,” Hume said.

Hold on. Bags of urine?

Indeed, it seems that’s a common practice among fans in El Salvador and Honduras.

“Just raining down, bags of piss were f—ing breaking on the net, they’d hit the net or burst beside you. Completely covered in piss,” Forrest said, recounting a match in the Cuscatlán — where Forge plays on Thursday night — in the late 1990s.

“And Frank (Yallop) gave a penalty away. At the time, I knew it was happening, because anytime there was a corner or anything else, it was bad. So the last thing you needed was a penalty where you had to stand on the freakin’ line.

“Frank gave a silly handball penalty away — and it was a penalty — and I’m like, ‘Frank! Are you f—ing for real? What are you doing to me here?'”

Chuckling, Forrest also revealed that he swapped his… ahem… damp jersey with a Salvadoran player after the game.

Both Forrest and Hume stressed that it’s not just the players who suffer the brunt of the hostile fans, either. In cathedrals such as Cuscatlán or Mexico City’s storied Estadio Azteca, referees can’t help but succumb to the pressure.

“I don’t think it’s intentional, I just think they’re human. They get affected by it,” Forrest offered. “When we played in Honduras we were 2-0 up in Tegucigalpa, the referee gave two penalties — two dubious penalties.

“Linesman was taking beatings on the sidelines all game, from being pelted by two-by-fours and missiles of any type, to the point where he asked the referee — this is just unacceptable, you can’t play like this.

“The referee’s like, ‘We’re not stopping the game.’ So the linesman would run the game 10 yards inside the field, pointing to the crowd with his flag, because he didn’t want to get hit with missiles. It’s like, how is that possible? How is that acceptable, how does FIFA allow this?”

Discipline will certainly be key for Forge in their Concacaf games, with or without fans. They can’t afford to go down a man, or give up anything easy.

These Concacaf games will also be a lesson in game management and the dark arts of football. Forrest recalled Canadian players being pinched by their opponents in free kick walls — really, anything it took to win.

“It’s a very incredible experience, and you’ve got to take it as that, and just sort of laugh at it. But when you’re on the field, whatever you do, don’t lash out, don’t flick out, don’t touch somebody’s face, none of that,” Forrest said.

“You have to be really, really, incredibly disciplined. And I’ve lost my head, as much as I’ve said that before; I got sent off in Panama.

“There was really not a lot, he came in and elbowed me, I didn’t go down. I gave him a little kick, like, ‘What the f— are you doing?’, he dropped like a sack of s—, goes on the ground. Referee runs up, I’m like, ‘Are you kidding me? Do you see what this guy just did?'”

Forrest took the red card, of course. As did teammate Paul Peschisolido not long after (for the heinous crime of being punched in the face, apparently). Canada held out for a 0-0 draw in that World Cup qualifier, though.

Forrest has plenty of other stories from off the pitch — Canada were once robbed on the way to the airport in San Salvador, which they discovered after a bus with their gear arrived well after the team (a story for another time). And then another time, in a hotel in Mexico City.

He remembers a few terrifying trips into Tegucigalpa, Honduras, which has an airport that no longer allows international flights because the lone runway is so short.

Plus, Canadian teams have to come prepared — bottled water is key (even for brushing your teeth, or ice cubes), as is food safety, to ensure nobody gets sick. The Canadian national team eventually began bringing their own cooks, although it still didn’t always work.

Forge learned that lesson firsthand — they returned from Honduras in 2019 with a team-wide stomach flu. Both Edgar and Bekker laughed when reminded of it, Edgar making a note to call his wife to pick up some snacks ahead of the trip.

The weather can be hot and humid, and the pollution in San Salvador has been known to cause problems for visiting players. The location of Estadio Cuscatlán, according to Hume, provides tough conditions, with the massive bowl of the stadium forcing humidity onto the pitch.

Then, Forrest added, there’s that time in the mid-90s that Les Wilson, long-time team manager, butted heads with armed guards outside the Cuscatlán who wouldn’t let Canada in for their training session.

“We show up there and these two soldiers are standing there with f—ing machine guns, and we see Les get off, and they don’t understand what he’s f—ing saying,” Forrest remembered.

“He’s basically getting pissed off, he’s saying we’re here, and we need to get in. And they’re crossing their weapons across each other, they won’t let him get in. He grabs their weapons, one with each hand, and pulls them apart. We’re in the bus, I’m like, are you f—ing insane, Les? These guys have just come out of a civil war. These are guys that don’t give a f— about life or nothing.”

Forrest assured CanPL.ca that things have calmed down in El Salvador since the 1990s, and the immediate aftermath of its long civil war. But what hasn’t changed is the passion.

“Their love of football is pretty special,” he said.

All the stories compound on top of one another — and there are countless more that haven’t been told here. Clearly, there are few more difficult places to play as an away team than Central America.