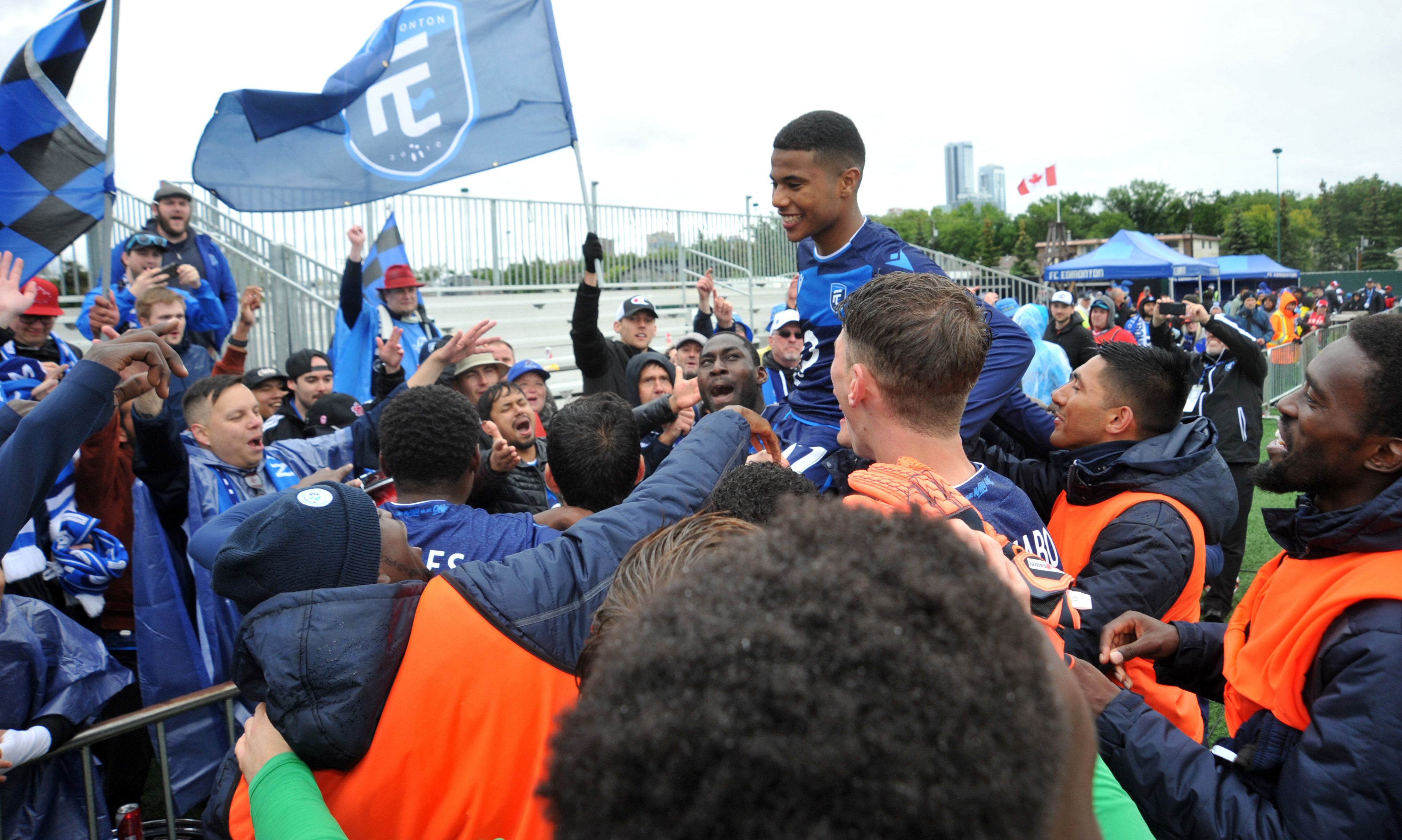 Jul 1, 2019; Edmonton, Alberta, CAN; FC Edmonton forward Marcus Velado-Tsegaye (17) his held up by his fellow players as they celebrate their win and his birthday with the fans on HFX Wanderers FC at the end of the second half of a Canadian Championship soccer match at Clarke Field. Edmonton won the game 2-0. Mandatory Credit: Walter Tychnowicz-USA TODAY Sports for CPL
To do list: 4 immediate tasks for Alan Koch at FC Edmonton
2020-11-24
by
Marty Thompson, Digital Content Editor (@martythompson_)
News

FC Edmonton has their man.

The Eddies unveiled Alan Koch as their new coach on Tuesday, signing the South African to a contract following his most recent stint in charge of Colorado Springs Switchbacks FC in the USL.

Koch, 45, previously coached Whitecaps 2 and FC Cincinnati, where he led the club during their first MLS season. He replaces Jeff Paulus, who stepped down as FCE coach earlier this year with a 10-9-18 overall record and a young, promising core remaining in place.

Koch takes over with only three players re-signed for next year and a laundry list of tasks ahead of the 2021 Canadian Premier League season.

Here are four things on Koch’s Day 1 checklist of things to do.

There are plenty of good CPLers on the free agent market. Can a high-profile hire such as Koch lure them to Edmonton?

CanPL.ca has learned that FCE has reached out to several out-of-contract CPLers the past few months. With Koch’s arrival, look for any negotiations between Edmonton and free agents to heat up.

So far, Louis Béland-Goyette, Dylan Carreiro, Matthew Arnone, and Ryan Telfer stand as the biggest free agents available, with many more yet to be announced.

A fresh start in Edmonton could be enticing to players looking for a CPL restart. Take Béland-Goyette, who leaves HFX Wanderers FC looking for a bigger role – could he be FCE’s new midfield dynamo? What about Arnone, who barely played at the Island Games for York9 despite earning player of the year honours with HFX Wanderers the year before?

FC Edmonton’s young core of players who have graced the CPL’s first two seasons has been impressive. It’s part of Jeff Paulus’ legacy, bringing youngsters across from the FC Edmonton Academy into the first team.

FCE’s new gaffer will be able to rely on Antony Caceres, Chance Carter, and Marcus Velado-Tsegaye, who have already re-upped by the club. Prince Amanda and David Doe remain without a deal, though.

Another element of Paulus’ legacy lies with the emergence of FC Edmonton’s veterans. As mentioned on CanPL.ca’s Virtual Newsroom last week, many players had connections to the NASL days in FCE’s history. While these veterans have been good at CPL level, you have to wonder how Koch will feel about them.

Securing the services of FC Edmonton’s star centre-back should be a top priority for Koch, though it may already be out of his control at this stage.

Didic’s FCE contract is expiring at the end of 2020, meaning he’s free to move on. The 25-year-old could have many options after making his Canadian men’s national team debut in January and nearly making the Vancouver Whitecaps’ MLS side a few months later.

Perhaps Koch’s arrival could convince the towering defender to stick it out for another year?

Forge has built its core from Sigma FC, and they’ve gone on to challenge for a Concacaf Champions League berth in under two years.

“Stick to your guns and create a culture within your organization, I think that’s the most important thing that has longevity,” Smyrniotis advised. “Believe in your philosophy one hundred per cent and get your players to buy-in, that gives you success in this league.”