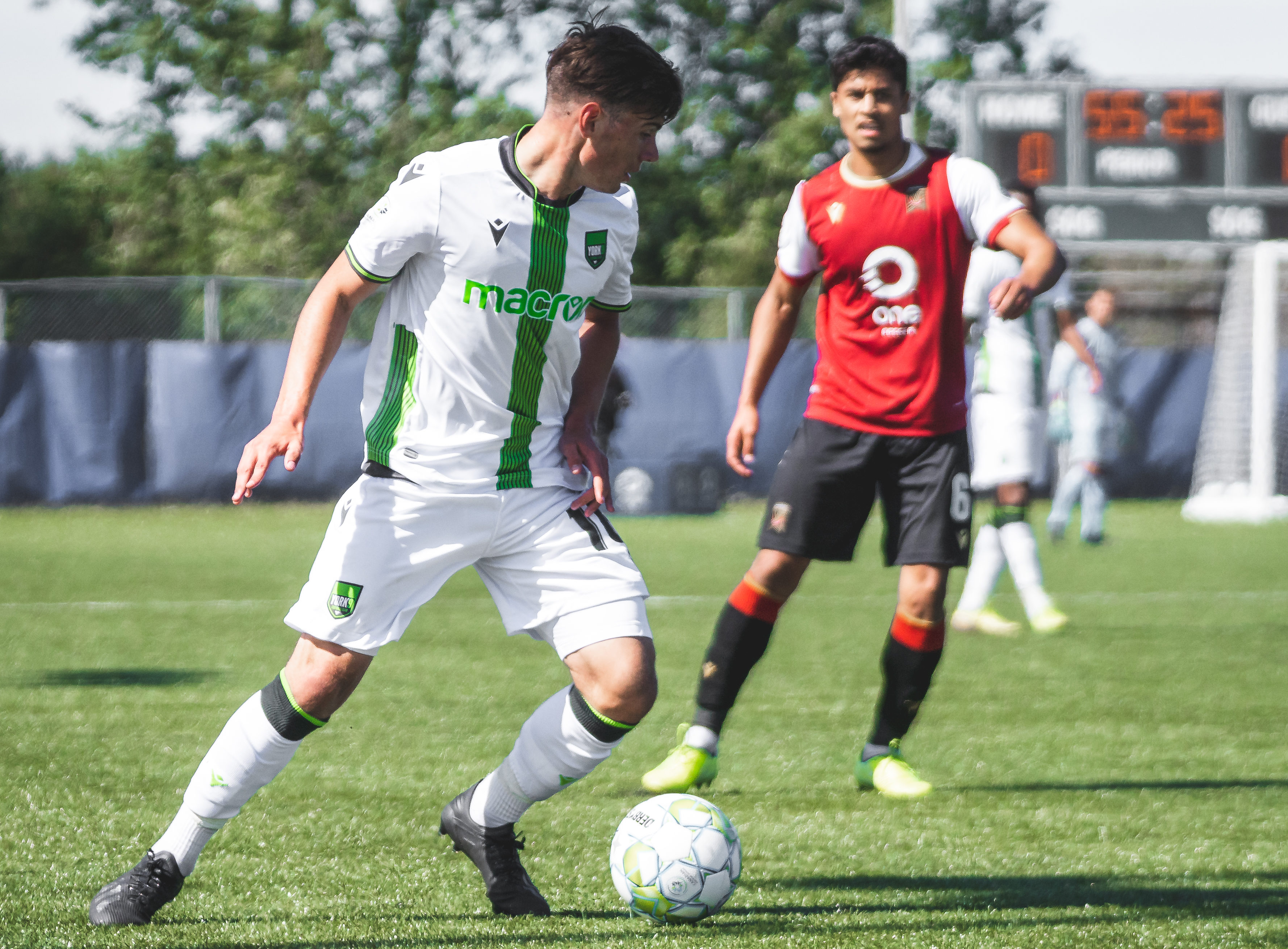 Once all the ballots were in, we tabulated the votes and came up with a cumulative list of the CPL’s best under-23 players.

Kicking off the list is a CPL original, 22-year-old Elliot Simmons out of Luton, England. He found new life in a new role this year, signing with Cavalry FC after beginning his CPL experience in 2019 at HFX Wanderers FC.

Simmons ended up appearing in all 10 of Cavalry’s games in 2020, starting all three of their crucial second round matches. The youngster has earned a reputation as one of the CPL’s most reliable young midfielders, with excellent passing ability and a good eye for buildup play. His six key passes at The Island Games rank in the top five for U-23 players, as he carved out a niche in a position that’s very difficult to play as a youngster.

Cavs coach Tommy Wheeldon Jr. had very high praise for Simmons during the season: “He’s almost got that Xabi Alonso, Toni Kroos type where he can receive it under pressure, but his range of passing is good.”

“We like him there because he’s a deep-lying playmaker; the Italians call it the regista. He fits that mould for us very well.”

He’s got one of the coolest names in the CPL, and he backs it up on the pitch. Ferrari made himself known to York fans very quickly, when he came on as a substitute in their first game of 2020 and almost immediately set up a goal. In the 59th minute of York’s game against Atlético Ottawa, Ferrari raced into the box and found fellow youngster Lowell Wright in a perfect spot to score the club’s first goal of the season.

The Newmarket, Ont., native celebrated his 20th birthday just five days later, in the midst of an Island Games campaign where he played in all seven of York’s games. Although Ferrari was kept to the “super-sub” role in each contest, the Nine Stripes found great value in Ferrari’s pace and tenacity on the ball.

For his efforts, Ferrari was recently rewarded with a new multi-year contract, with president and GM Angus McNab expressing his delight at the young attacker’s improvement in 2020 and his potential for the coming years in York Region.

Like Elliot Simmons, Hamilton was a year one CPLer who struck out in search of a new opportunity within the league in 2020. In this case, the former Cavalry FC fullback joined an exclusive club of players who suited up for a completely brand-new team in two consecutive years.

Hamilton, a Calgary native who turned 21 during The Island Games, started all seven of Atlético Ottawa’s matches in PEI. He was one of the expansion side’s main outlets in attack, forming a very strong fullback partnership with fellow West Ham United academy product Vashon Neufville, as Ottawa chose more often than not to attack along the flanks. Hamilton’s explosive pace and ability to spring wingers and strikers with smart passes made him an indispensable part of Atleti’s first CPL season. The fact that he had more touches than anyone else on the team speaks to his importance.

The first CPL season was a very promising one for Hamilton at Cavalry, where he filled in excellently at right fullback in the absence of Dean Northover, but his move to Ottawa gave him a more secure starting position, as well as a more influential role in the attack.

The teenaged Edmontonian has certainly turned a few heads in his two years in the CPL — in fact, he landed as high as second on one voter’s ballot for this list. Velado-Tsegaye has performed well in his 22 career games with FC Edmonton; well enough, actually, to be one of the first players re-signed for 2021.

His best moment, of course, was the long-range screamer he scored late in the Eddies’ Island Games clash with HFX Wanderers FC. Although it didn’t have an impact on the game, it was a major bright spot in a disappointing campaign for the club.

Velado-Tsegaye played in the Eddies’ final four games of 2020, starting the last two at left wing. He was initially promoted to the professional club by Jeff Paulus after developing in the FC Edmonton academy, and went on to become an important player off the bench for the side in 2019. He scored his first goal for the club on the last day of the Spring season (also his 18th birthday, and Canada Day) to secure a win at home over HFX.

The talented youngster might be the best of the Eddies’ young academy graduates.

The Spanish midfielder stood out for Atlético Ottawa at The Island Games, and not just because of his hair. Martínez — currently doing very well on loan at Alavés B — played every minute of all but one of Ottawa’s matches in PEI. He was a key link for the side between the defence and attack, often tasked with moving the ball from centre-backs or fullbacks onward to the likes of Francisco Acuña and Ben Fisk.

Martínez’s best moment of the 2020 season was undoubtedly in Ottawa’s penultimate game, when he broke a 0-0 deadlock by scoring in the 90th minute against Pacific FC, keeping the club’s top-four hopes alive and snatched a victory. At this point, it may well be the biggest goal yet in the club’s short history.

Although he’s only 23, Martínez has a lot of experience, most of it in his native Spain. He brought a steady presence to the Atlético Ottawa midfield, and a little extra attacking ability and flair.