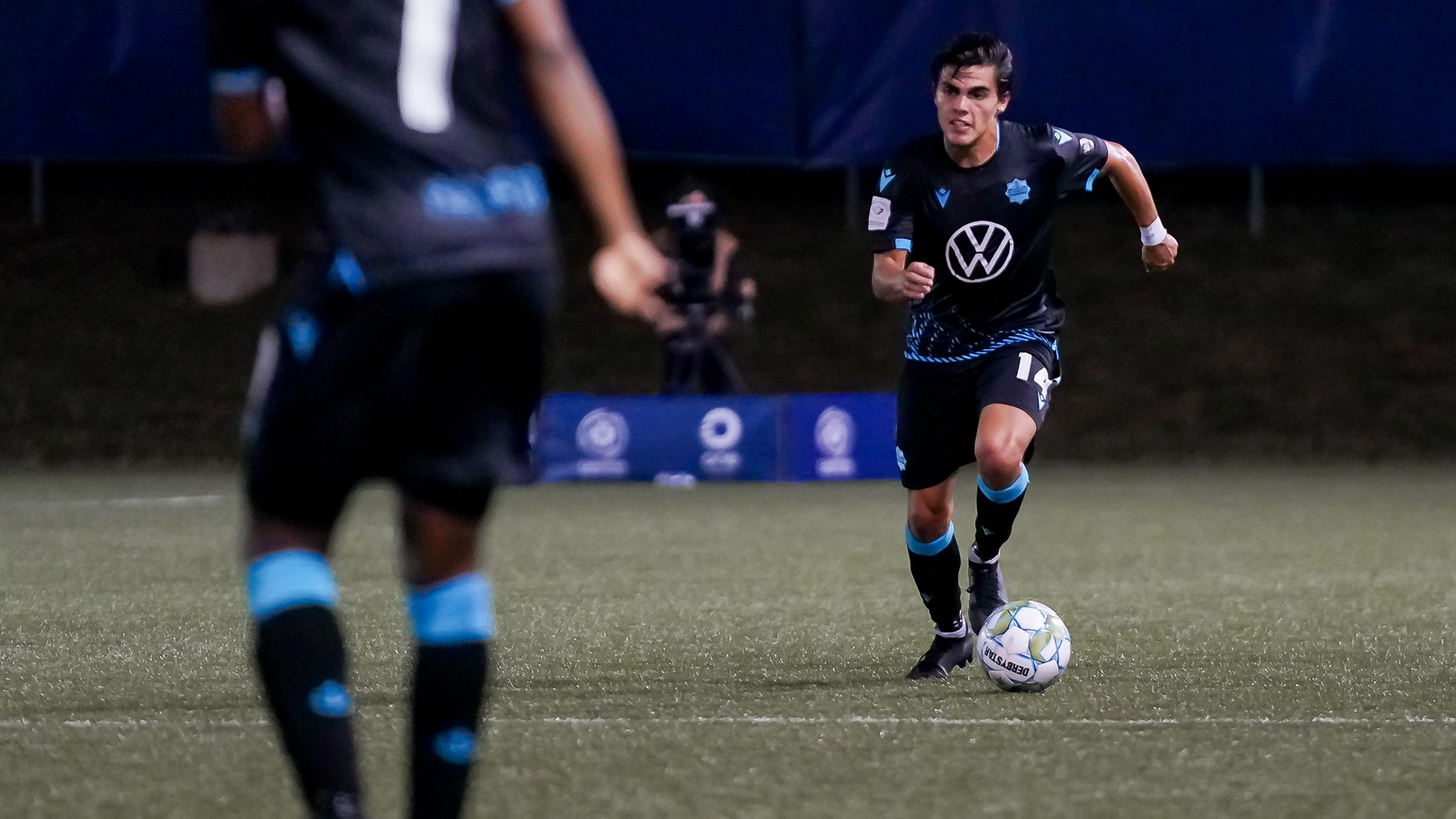 Last year was a big one for Mateo Restrepo as he entered his first season as a professional footballer with HFX Wanderers FC.

Restrepo signed on with the HFX Wanderers for 2020 following 66 appearances for his alma mater UC Santa Barbara Gauchos, a team in NCAA Division 1.

Mateo chatted with CanPL.ca contributor Dylan Lawrence to chat about his first year as a professional footballer.

Can you tell me a bit about your first impression of HFX Wanderers?

MR: It was amazing, except for not being able to interact with the fans at the Wanderers Grounds. But, in terms of the team itself, everybody was super welcoming and took me in with open arms. I got to training late and it would’ve been easy for me to feel like an outsider. From the moment I got there, the guys who were there before and some of the new guys took me under their wing and integrated me into the team very quickly. It made me feel comfortable on the pitch and express myself knowing I had their support.

When it came to integrating with the team, which teammates took you under their wing?

MR: When I first got to Halifax, Alex De Carolis was instrumental and came in once I had done my quarantine and sat me down to give me the low down of things. He really welcomed me with open arms and I’m still very grateful for that. Once we got to the Island Games, the leadership from Alex, Rampy (Andre Rampersad) and Peter (Schaale) was absolutely phenomenal. Through the ups and downs of the tournament they were headstrong and consistent with us. It was very admirable and they were great leaders; they made it easier on the entire team. Other guys too, some of the older guys really set the tone and kept on the right path

The new players on the squad had to perform for the rest of the team. What song did you end up performing?

MR: I did my favourite song of all time, Juicy by the Notorious BIG.

What would you say is the importance of having team moments like that off the pitch?

MR: It takes our mind off football for a little bit and allows us to be goofy and regular human beings. It allows us to build those relationships off the pitch which strengthen the relationships on the pitch. So doing events like that is really helpful with building camaraderie and brotherhood in general. They’re great things to do and I’m happy that we did them.

When it comes to gamedays, could you walk me through your pre-game routine?

MR: So I actually had a very specific routine at the Island Games. I read this book called the ‘Mindful Athlete’ and it was all about how meditation helps athletes get into the zone. I was reading that and watching some Lebron James and Kobe Bryant (routines) and I kind of developed my own to model it. I would take a super cold shower to get the endorphins up and then I would do a 15 minute meditation where I would go through situations that I knew I would encounter in a game. I knew who I was going to defend most likely, what their tendencies were and I would play those situations in my head before going onto the pitch. It’s kind of like studying for a test; priming my brain to react to certain movements and to act in certain ways in different situations. When I got on the pitch I felt calm and ready.

Do you practice mindfulness in your day to day as well?

MR: I was getting very good at it, almost (practicing) every day. I unfortunately haven’t kept that routine as I’m pretty busy – and I should. I really should take 10 minutes a day but I’ve been studying for the MCAT and there’s only 24 hours in a day and it’s getting pretty hectic right now, so I forget to. But at least once a week I do and reflect and keep my mind healthy. I think it’s very important and I think everyone should do it.

Around the holidays, can you tell me what it’s like being able to be with the people you love?

MR: It’s amazing. We’re footballers and obviously we do it for the love of the game and how passionate we are about it. The overarching fact is we’re also doing it for the people we love because we know that, to some extent, they live vicariously through our experiences. So getting to come back home and give Mom a jersey, Dad a jersey and my sister a bunch of stuff and seeing them super happy was very, very special. Getting to come to California as well to see my girlfriend without seeing her for eight months has been amazing and is amazing since I’m here right now. So it reinforces those reasons as to why you sacrifice so much for the game.

Being your first Christmas away from your family, would you say that your experience as a professional footballer has helped you adapt to these types of situations?

With your first Christmas in California, can you tell me what the Holidays look like there?

MR: It’s pretty funny because this entire place is covered with Palm trees and stuff but people still try to be as festive as they can. You see palm trees coded with Christmas lights and houses trying to bring out this snowy Christmas without snow and all of those rituals. But it’s pretty cool because you still get to go to the beach for sunset – it’s pretty different but it’s cool how they do it here.

Reflecting on the craziness of 2020, how are you looking to approach 2021?

MR: Well it was my first year as a professional in 2020 so I didn’t really know what to expect. I really tried to become integrated and assimilated with life in Halifax, life on the East Coast and my new teammates and everything. With such a large base of the 2020 team coming back, I think 2021 is going to have more focus on improving as a team and as an individual. It’s less about assimilating as a team – coach Stephen Hart has said it often but we’re not a secret anymore, teams aren’t going to take us for granted. We need to strive to improve and tweak the little things from 2020 so we can be even better next year.

Stephen Hart often used the word “grinta” to describe what he wanted from the team during the Island Games. Can you tell me about that concept and how the team embraced it?

MR: I think “grinta” described our team perfectly – we were a group of individuals who, at some point in their careers, had been overlooked and maybe under-appreciated and I think that really came out in our game. Our ability to win scrappy games and fight inch-by-inch, yard-by-yard for the success of our team and the success of the (the club). We were a group of headstrong individuals who encompassed that “grinta” mentality perfectly. I think that’s our “X factor” – it’s what makes us special. We’re able to fight through the tough times and use that grit, that intrinsic quality that helps us to get wins and to get results.